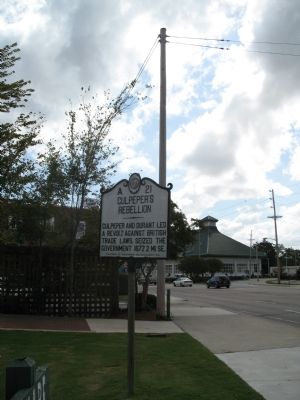 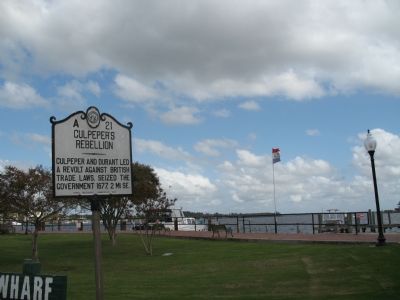 By Laura Troy, October 1, 2007
2. Mariners' Wharf
Culpeper’s Rebellion took place in 1677–1678 in Albemarle County (what is now Pasquotank County). The rebellion was in response a variety of complaints about the government, but arose primarily as a reaction to the Navigation Acts imposed on the colonies by England. At the time, North Carolina was ruled by eight Lords Proprietors. The government in North Carolina consisted of the following: the Governor; the Council, half of which was appointed by the Lords Proprietors; and an Assembly elected by popular vote. The Council was powerful while the Assembly was weak.

The people were unhappy with the government. The Proprietors, who paid little heed to the increasing discontent, kept appointing deputies, and the people saw this as a way for the Proprietors to continue to limit the people’s privileges. With the passage in England of the Navigation Acts, resentment for the Proprietors grew. The Navigation Acts regulated the shipping of goods, and many of the acts passed imposed duties or taxes on items shipped between colonies.

In 1672, Governor Peter Carteret traveled to England to try and convince the Proprietors that they should not enforce the new laws. His attempt failed. Tensions ran high between two factions that existed in Albemarle. The three opposition leaders were John Culpeper, John Jenkins, and George Durant. John Miller, one of the supporters of the Proprietors, was appointed secretary and collector of the duties. He later became acting governor. He abused his power by tampering with local elections and imposing heavy fines on colonists.

Finally, the opposition had had enough. Durant, Culpeper, and some armed supporters captured and imprisoned Miller. They arrested other officials and eventually seized the reins of government. For two years, the colonists enjoyed peace and the government ran more smoothly. The Proprietors summoned Culpeper to England, where he was arrested and charged with treason. He was put on trial, but he was found not guilty, marking the end of the rebellion.