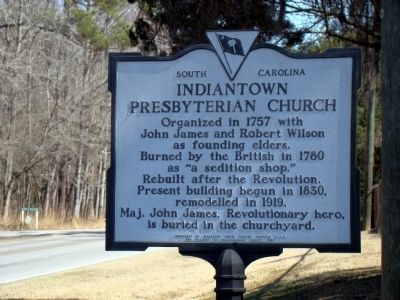 By J. J. Prats, February 20, 2010
1. Indiantown Presbyterian Church Marker
Inscription.
Indiantown Presbyterian Church. . . Organized in 1757 with John James and Robert Wilson as founding elders. Burned by the British in 1780 as “a sedition shop.” Rebuilt after the Revolution. Present building begun in 1830, remodelled in 1919. Major John James, Revolutionary hero, is buried in the churchyard. . This historical marker was erected in 1957 by Williamsburg County and sponsored by Margaret Gregg Gordon Chapter, D.A.R.. It is in Hemington in Williamsburg County South Carolina

Organized in 1757 with John James and Robert Wilson as founding elders. Burned by the British in 1780 as “a sedition shop.” Rebuilt after the Revolution. Present building begun in 1830, remodelled in 1919. Major John James, Revolutionary hero, is buried in the churchyard.

Other nearby markers. At least 10 other markers are within 11 miles of this marker, measured as the crow flies. Indiantown Presbyterian Church: “Disarm in the Most Rigid Manner” (within shouting distance of this marker); Benjamin Britton Chandler (1854–1925) 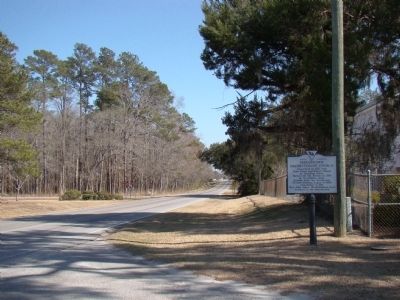 Also see . . .
1. Indianatown Presbyterian Church. Indiantown Presbyterian Church was founded in 1757 by a group of Scotch-Irish Calvinist settlers under the leadership of Robert and David Wilson and Major John James, a patriot of prominence in the exploits of General Francis Marion's Brigade in the American Revolution. (Submitted on February 9, 2011, by Brian Scott of Anderson, South Carolina.)

3. Indiantown, South Carolina. “It was a site of early European settlement based around the Indiantown Presbyterian 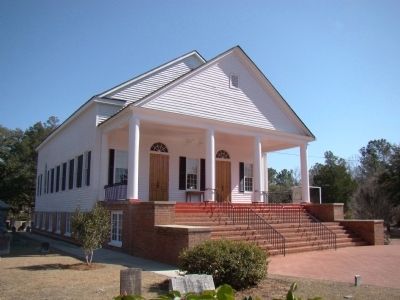 By J. J. Prats, February 20, 2010
3. Indiantown Presbyterian Church
Church which was burned by the British Lieutenant-Colonel Banastre Tarleton during the American Revolution, an act which increased the loyalty of the area people to his primary opponent, American General Francis Marion.” (Submitted on February 23, 2010.)

Additional comments.
1. John James Assists Francis Marion Against the British
From the 1920 book History of South Carolina edited by Yates Snowden. This excerpt can be found in Chapter XXV and starts on page 389.

Gates Sends Marion Ahead. Gen. Horatio Gates was now advancing toward Deep River, North Carolina, with the continentals which Congress had sent to the relief of South Carolina. As far back as June 13th, Congress, without consulting Washington, had appointed him to succeed Lincoln as commander of the southern department. The Baron DeKalb had come southward in command of the continental troops and had halted at Hillsborough [NC] on June 2Oth for rest and to obtain supplies. There General Gates joined him on July 25th. As has been stated, Marion had joined the baron at Deep River, North Carolina, and was instinctively accepted by his noble comrade in arms as an able, dashing 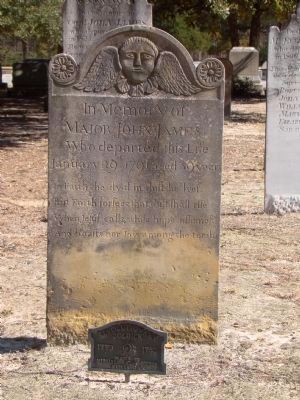 By J. J. Prats, February 20, 2010
4. Major John James Gravestone
“In Memory of Major John James, who departed this Life January 29th, 1791 aged 59 years. In Faith he dy'd. In dust he lyes. / But Faith forsees, that dust shall rise. / When Jesus calls, while hope assumes. / And boasts her Joy among the tombs.” Small metal marker reads “Revolutionary Soldier, 1775—1783. Placed by Margaret Gregg Gordon Chapter, D.A.R.”
leader of men, notwithstanding his insignificant stature and uncouth exterior. But Gates could not look beyond the outside garments, and, at the request of the partisan leader, sent Marion to the interior of South Carolina—to watch the enemy, furnish intelligence for “the Grand Army.” After gathering what was afterward known as Marion’s Brigade, its leader arrived at Lynch’s Creek, near the line between the present counties of Williamsburg and Marion. This was the center of the Irish district, which the British had not been able to subdue. The bloody Major Wemyss had attempted it and now Colonel Tarleton was engaged in the same savage errand. Maj. John James, who had been to Georgetown and learned from the British, first hand, that the people were expected not only to surrender but to fight against their fellows, had held the post at Lynch’s Creek, waiting for the coming of Gates and his continentals, or any other party of relief. (The story is told that shortly before Major James, who had already served in the General Assembly and fought creditably under Moultrie, had met [the British] Captain Ardesoif, Clinton’s agent at Georgetown, and, being unarmed, had resented an insult of the British officer, attacked the captain with the chair upon which he himself had been seated, and made good his escape through the rear door of the house represented in the illustration [Photo No. 6].)

How Unpaid Militiamen Fought. When Marion arrived on the 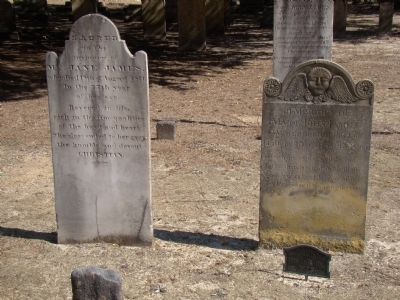 By J. J. Prats, February 20, 2010
5. Jane James and Major John James Grave Site
Major John James' wife is buried beside him. Her gravestone reads “Sacred to the memory of Mrs. Jane James, who died 18th of August 1811, in the 77th year of her age. Revered in life, rich in the fine qualities of the head and heart; she descended to her grave the humble and devout Christian.”
10th of August, with his men, he assumed general command also of a small party which had come from Georgetown under Lieut. Col. Hugh Horry, as well as jurisdiction over the entire country east of the Santee River. He was accompanied by Maj. Peter Horry, Maj. John Vanderhorst, Capt. John Milton of Georgia and Capts. Lewis Ogier and James Theus. Marion wasted no time in forming elaborate plans, but when he discovered a Tory force which he could rout he started after it. So on the second day after his arrival at Lynch's Creek, with the assistance of Major James's horsemen, he drove one party of Tories into the swamp, and ambuscaded and defeated another.

The reader will note that while Gates was slowly approaching with the Continental army, the British had been pluckily met and generally defeated in twelve engagements and that, according to McCrady, “three hundred British and Tories had been killed and wounded, and about two hundred taken prisoner at a loss of not half that number to the Americans.” Their opponents had been the volunteers of the Carolinas and Georgia under the leadership of Marion, Sumter, Davie, Pickens, McDowell, Shelby, Clarke and the lesser partisans. Ferguson and Tarleton were to have an accounting, but not before Gates had been humiliated.
— Submitted February 23, 2010, by J. J. Prats of Powell, Ohio. 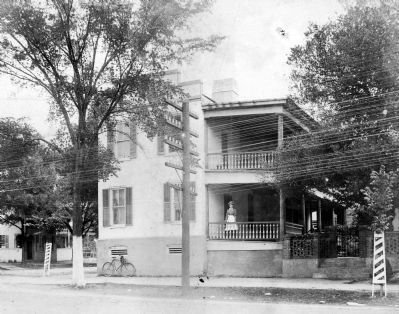 6. “An Historic Georgetown Home”
House in Georgetown SC where Major John James is reputed to have attacked British Captain John Plumer Ardesoife with a chair in response to an insult. From the 1920 book History of South Carolina edited by Yates Snowden. 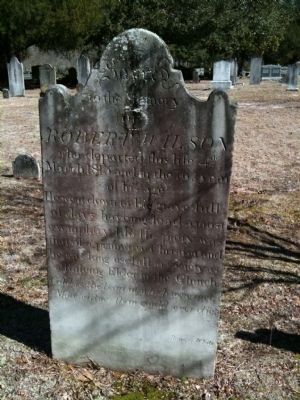 By Cindy Bullard, February 18, 2010
7. Robert Wilson Grave Marker
Sacred to the Memory of Robert Wilson who departed this life 4th March 1814 and in the 76th year of his age.
He went down to his grave full of days haveing lead a most exemplary life. His piety was that of a primative Christian and he was long usefull to society as Ruleing Eldar in the Church.
Cold is the heart in which were met, More virtues than could ever die.
Credits. This page was last revised on June 16, 2016. It was originally submitted on February 23, 2010, by J. J. Prats of Powell, Ohio. This page has been viewed 2,104 times since then and 38 times this year. Photos:   1, 2, 3, 4, 5, 6. submitted on February 23, 2010, by J. J. Prats of Powell, Ohio.   7. submitted on February 24, 2010, by David Bullard of Seneca, South Carolina.
Share This Page.