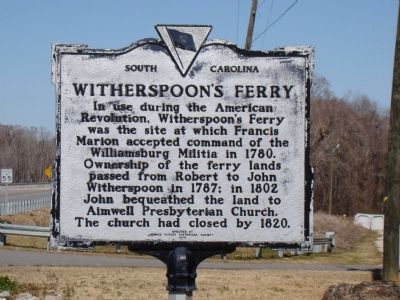 Witherspoon’s Ferry. In use during the American Revolution, Witherspoon’s Ferry was the site at which Francis Marion accepted command of the Williamsburg Militia in 1780. Ownership of the ferry lands passed from Robert to John Witherspoon in 1787; in 1802 John bequeathed the land to Aimwell Presbyterian Church. The church had closed by 1820.

Johnsonville. In 1819, former South Carolina Governor David R. Williams, son-in-law of John Witherspoon, obtained these ferry lands. In 1842 William Johnson acquired the land and in 1843 a post office, named Johnsonville, was established near her.

Topics. This historical marker is listed in these topic lists: War, US Revolutionary • Waterways & Vessels. A significant historical year for this entry is 1780. 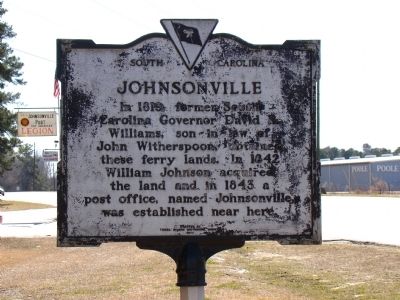 Click or scan to see
this page online
traveling south. It is next to the American Legion Post. Touch for map. Marker is at or near this postal address: 714 Kingsburg Highway, Johnsonville SC 29555, United States of America. Touch for directions.

Also see . . .  Revolutionary War Raids & Skirmishes in 1781. “After the raid on Snow’s Island, [British Colonel] Doyle retraced his steps six or seven miles to Witherspoon’s Ferry where he camped on the north bank of Lynches River. When [American partisan Francis] Marion returned he camped at Indiantown, at which time his force had dropped down to about 70 men. Even so, on April 3, Brig. Gen. Francis Marion ordered Lt. Col. Hugh Horry to take his mounted infantry to travel to Whig’s Plantation. At the plantation, Col. William E. Doyle had some foragers there collecting food for the troops. When Horry 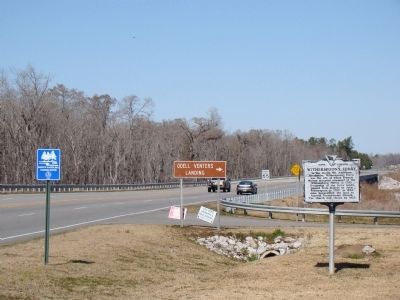 Photographed By J. J. Prats, February 20, 2010
3. Witherspoon’s Ferry / Johnsonville Marker
arrived at the plantation, they engaged the British, killing 9 men and capturing 16 men. The Patriots pursued the fleeing British to Witherspoon’s ferry. There, they caught the British rear guard scuttling the ferryboat. The Patriots fired on the Loyalists. Doyle quickly formed his men along the bank of the Lynches River and delivered a volley of musketfire on the Patriots. After this firing, the British gathered up their belongings and headed towards the Pee Dee River. Doyle is said to have lost 9 killed or wounded, and 15 or 16 taken prisoner in the encounter. Either just before or after this event, Marion was joined by a reinforcement under Col. Able Kolb to assist against Doyle The latter, however, made haste to withdraw, destroyed his heavy baggage, and retired to Camden.” (Submitted on February 24, 2010.)
Credits. This page was last revised on June 16, 2016. It was originally submitted on February 24, 2010, by J. J. Prats of Powell, Ohio. This page has been viewed 1,526 times since then and 70 times this year. Photos:   1, 2, 3. submitted on February 24, 2010, by J. J. Prats of Powell, Ohio.
Share this page.