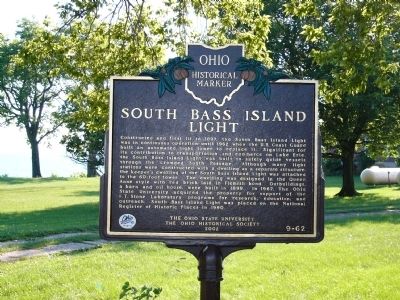 Constructed and first lit in 1897, the South Bass Island Light was in continuous operation until 1962 when the U. S. Coast Guard built an automated light tower to replace it. Significant for its contribution to transportation and commerce on Lake Erie, the South Bass Island Light was built to safely guide vessels through the crowded South Passage. Although many light stations were constructed with a dwelling as a separate structure, the keeper's dwelling of the South Bass Light was attached to the 60-foot tower. The dwelling was designed in the Queen Anne style with red brick laid in Flemish bond. Outbuildings, a barn and oil house, were built in 1899. In 1967, The Ohio State University acquired the property for support of the F. T. Stone Laboratory programs for research, education, and outreach. South Bass Island Light was placed on the National Register of Historic Places in 1990.

Erected 2002 by The Ohio State University and The Ohio Historical Society. (Marker Number 9-62.)

Topics and series. This historical marker is listed in these topic lists: Industry & Commerce 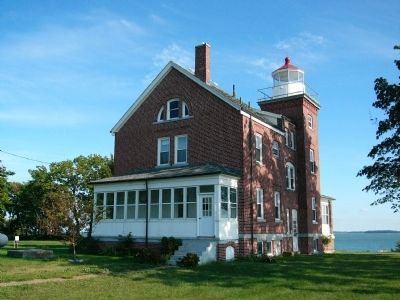 By Dale K. Benington, August 17, 2003
2. South Bass Island Light
View of backside of lighthouse looking southward, with a view of Lake Erie, just beyond the lighthouse.
• Landmarks • Waterways & Vessels. In addition, it is included in the Ohio Historical Society / The Ohio History Connection series list.

Location. 41° 37.733′ N, 82° 50.436′ W. Marker is near Put-in-Bay, Ohio, in Ottawa County. Marker is on Langram Road, on the left when traveling west. This historical marker is on the southwestern tip of South Bass Island, just east of the lighthouse. If you take the Miller Ferry boat service from Catawba Island to South Bass Island, once you arrive on the island, immediately proceed to the first street (Langram Road), turn left onto Langram and travel west for about 2 to 3 tenths of a mile and you will arrive at both the lighthouse and the historical marker. Touch for map. Marker is at or near this postal address: 2360 Langram Road, Put in Bay OH 43456, United States of America. Touch for directions. 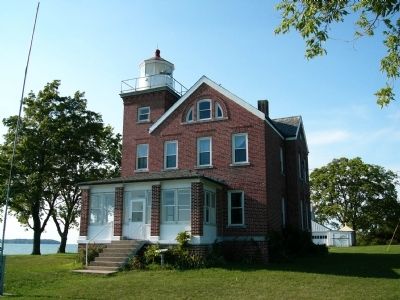 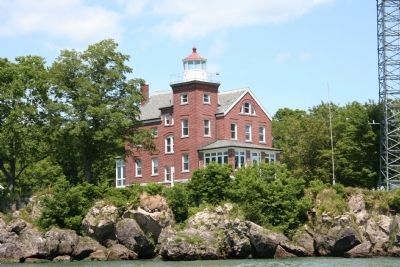 By Dale K. Benington, July 5, 2006
4. South Bass Island Light
View of the lighthouse as seen from a boat in the water sitting just offshore from the lighthouse. 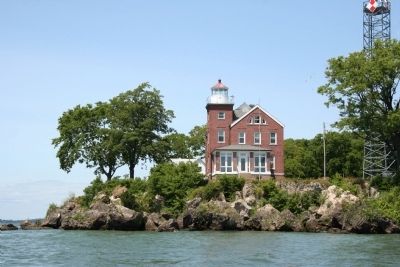