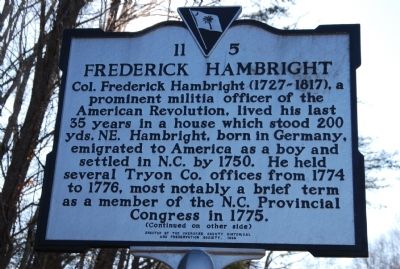 Photographed By Michael Sean Nix, March 6, 2010
1. Frederick Hambright Marker
Inscription.
Frederick Hambright. . , [Front]: , Col. Frederick Hambright (1727-1817), a prominent militia officer of the American Revolution, lived his last 25 years in a house which stood 200 yds. NE. Hambright, born in Germany, emigrated to America as a boy, and settled in N.C. by 1750. He held several Tryon Co. offices from 1774 to 1776, most notably a brief term as a member of the N.C. Provincial Congress in 1775. , [Reverse]: , Hambright, after several campaigns, was promoted to lt. col. by 1779. He commanded the Lincoln Co. (N.C.) troops at Kings Mtn. Oct. 7, 1780, and was severely wounded. After recuperating at a log cabin near the battlefield he returned to N.C. but soon moved to S.C. and built a two-story house near the cabin; it burned in 1927. He is buried 1 mi. E of Grover, N.C. at Shiloh Cemetery. . This historical marker was erected in 1999 by Cherokee County Historical and Preservation Society. It is Near Blacksburg in Cherokee County South Carolina

[Reverse]:
Hambright, after several campaigns, was promoted to lt. col. by 1779. He commanded the Lincoln Co. (N.C.) troops at Kings Mtn. Oct. 7, 1780, and was severely wounded. After recuperating at a log cabin near the battlefield he returned to N.C. but soon moved to S.C. and built a two-story house near the cabin; it burned in 1927. He is buried 1 mi. E of Grover, N.C. at Shiloh Cemetery. 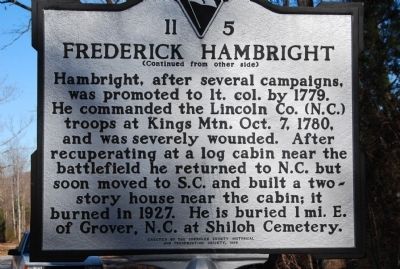 Click or scan to see
this page online
• Patriots & Patriotism • Settlements & Settlers • War, US Revolutionary. In addition, it is included in the South Carolina, Cherokee County Historical and Preservation Society series list. A significant historical year for this entry is 1750. 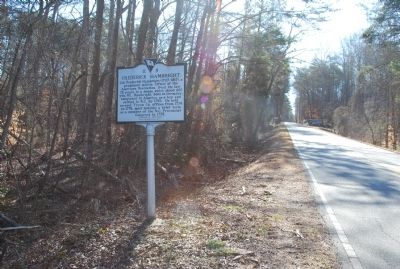 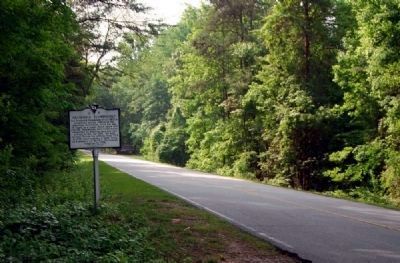 Photographed By Brian Scott, May 14, 2010
4. Frederick Hambright Marker -
Looking South Along Battlefield Drive
the age of 11, on board the ship the St. Andrew's. (Submitted on September 4, 2010, by Brian Scott of Anderson, South Carolina.)

Additional commentary.
1. Colonel Frederick Hambright
Lieutenant Colonel Hambright was born in Germany in 1727 emigrated to Pennsylvania about 1740 and after remaining there a short time removed to Virginia about 1755 where he married Sarah Hardin with whom he lived happily until her death during the Revolution. A few years after his marriage he moved to Tryon county in North Carolina being accompanied by his brothers in law, Colonel Joseph Hardin John Hardin and Benjamin Hardin; also by James Kuykendall Nathaniel Henderson Robert Leeper and others. He first settled at the Fort erected near the mouth of the South Fork of the Catawba river as a protection against the attacks of the Indians. From that place he soon afterward moved to Long Creek in the same county and was living there when the battle of King's Mountain took place in which he so gallantly participated. A short time previous to that battle he had purchased a tract of land on King's Creek and had built a cabin upon it preparatory to a future removal of his family.

Colonel Hambright was twice married. By the first marriage to Sarah Hardin, he had 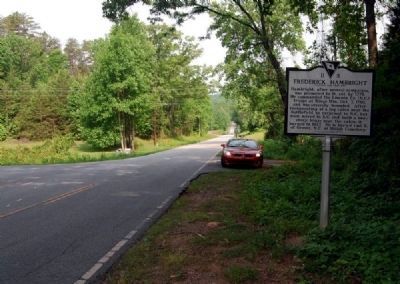 Of these, Elizabeth married Joseph Jenkins and Sarah, Peter Eaker both of whom have worthy descendants. By the second wife Mary Dover whom he married in 1781 he had ten children of whom eight were raised. Mrs Susannah Dickson the tenth child by the second wife, and the youngest of the twenty two children, is still living and retains in her memory many interesting traditions of the Revolution.

Colonel Hambright early displayed a fervent patriotic zeal for the independence of his adopted country. In 1777 he received the appointment of Lieutenant Colonel and was throughout the war an active and courageous officer. He was constantly watching the movements of the Tories whose malicious influence aud plundering habits seriously disturbed the peace aad welfare of society. His name soon became a terror to the Tories who well knew the determination of his character, and the vigilance and prowess of his arms in arresting disaffected persons and defeating their designs. At the battle of King's Mountain, Col William Graham, having charge of the Lincoln regiment, not being present on account of sickness in his family, the command devolved on Col Hambright and most nobly and courageously 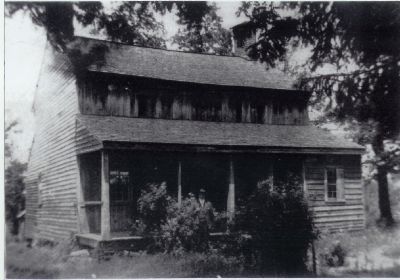 Photographed By Wikipedia, circa 1920
6. Frederick Hambright Homestead
Hambright Homestead in 1920's
did he sustain the responsible position, No portion of the advancing Whig columns evinced more irresistible bravery and suffered more severely than the troops under his immediate command. Major William Chronicle one of his most efficient and gallant officers fell early in the action. There too, Captain John Mattocks, Lieutenants Robb and Boyd, and others all from the same neighborhood lost their lives in that fiercely contested battle which resulted so gloriously for the cause of liberty. In this conflict Colonel Hambright was severely wounded by a large rifle ball passing through the fleshy part of the thigh. It was soon discovered by the soldiers near him that he was wounded and bleeding profusely. Samuel Moore of York county, South Carolina requested him to to be taken from his horse; he refused by saying he knew he was wounded but was not sick or faint from the loss of blood, said he could still ride very well and therefore deemed it his duty to fight on till the battle was over. And most nobly did he remain in his place encouraging his men by his persistent bravery and heroic example until signal victory crowned the American arms.

At the close of the action when Colonel Hambright alighted from his horse, the blood was running over the top of the boot on the wounded leg. He was then conveyed to the cabin erected on his own land, as previously stated before the war, where he was properly cared for until he was partially recovered. Although the wound in process of time seemed to have healed yet its deep seated injury caused him to falter in his walk during the remainder of his life. The reason he assigned for refusing to be taken from his horse when severely wounded does honor to his exalted patriotism. He said if he had complied his men would neglect to load and fire as often as they should, would gather around him to administer to his wants and thus fail to do their whole duty in opposing and conquering the enemy. Such true devotion to the cause of freedom is worthy of our waimest admiration and forcibly illustrates the heroic spirit which animated the band of patriots who achieved on King's Mountain one of the most importaut and decisive victories af the American Revolution.

Colonel Hainbright was long a worthy member and elder of the Presbyterian church at Shiloh in the present limits of Cleaveland county [N.C.]. On his tombstone we have this plain inscription: