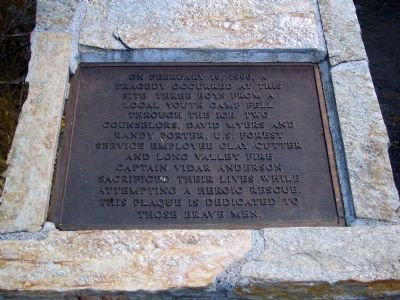 On February 19, 1990, a tragedy occurred at this site. Three boys from a local youth camp fell through the ice. Two counselors, David Myers and Randy Porter, U.S. Forest Service employee Clay Cutter, and Long Valley Fire Captain Vidar Anderson sacrificed their lives while attempting a heroic rescue. This plaque is dedicated to those brave men.

Topics. This historical marker is listed in these topic lists: Heroes • Notable Events. A significant historical month for this entry is February 1933. 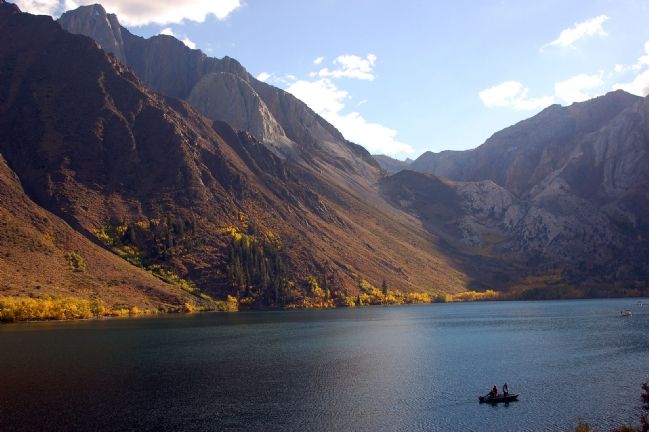 Additional commentary.
1. Tragedy at Convict Lake
Did the boys that sliped through the ice survive? What were their names?
— Submitted August 27, 2007.
2. Tragedy at Convict Lake
I am sorry to report that the three teenagers and their four rescuers all died in the frigid waters of Convict Lake. I have not been able to find their names using online sources. Perhaps someone who knows can post their names here.
— Submitted August 27, 2007, by J. J. Prats of Powell, Ohio.
3. Clay Cutter
As I was traveling north bound on the 395 at noon that day, Paul Harvey came on the radio with his daily segment, he happened to mention seven people fell through the ice on Convict Lake, California. The turn for Convict Lake was approaching and I made the left turn and raced to the scene. I went as far as I could and stopped. I ran to Clay and Terri Cutter's house, which happens to be the only house there, reserved for the Forestry Rangers family. There was Terri's wife pacing on the shore line in complete panic. By that time they all had disappeared under the ice and rescuers were launching a small boat. I stayed with Terri until her parents arrived. I knew the Cutter family and shared with their grief. Clay was a fine person and a professional in every way. I pray Terri and her two daughters are well, and I think of them often. Note To Editor only visible by Contributor and editor
— Submitted May 20, 2008, by Rodger D Wood of Walker Lake, Nevada.
4. About the Tragedy
I was there during this tragic moment and was also a resident of Camp Oniel. We were all on an outing to the lake. The counselors and I were walking on the side of the frozen lake. There were other kids that went out into the middle of the lake, walking on the ice at that time. One or two of the kids thought it was cool to throw rocks into the ice. That's when the unfortunate thing happened. The ice caved in. There was one of the kids who made it out of the ice and crawled on the ice to shore and the other kid was a new kid that was in the ice saying "please I don't want to die." I threw my vest jacket to Dave to try to help but was told to get to shore before it was to late. I listened and proceeded to shore. I looked back and the ice went from under him. It was a very terrifying moment. I have never ever forgotton and now I see this plaque. It means alot to me. On the funeral day we set up right on Convict Lake. They stated they could not find the bodies as it was too deep. I remember I sang the song "I Cast All My Cares Upon You," and to this day I will never ever forget what happened. RIP Dave and other counselors. They have been really missed.. Note To Editor only visible by Contributor and editor
— Submitted December 17, 2009, by Shane Campbell of San Bernardino, California.
5. Clay
Clay was my crew leader in the CCC Bishop back in 1980. He was a great Red Hat and I was really broken up to hear of this unfortunate accident. Clay was there on my 1st night in camp after 3 weeks in training up at Angels Camp, we partied at the cave behind the camp. Cap Caplinger rode us hard at PT in the morning and I think all of us ended up getting sick to our stomachs. Thankfully Clay was easier on us that day. Whenever I head up 395 I stop at Convict and think of Clay and my time in the pristine Eastern Sierras. Note To Editor only visible by Contributor and editor
— Submitted February 8, 2010, by Tim Elersich of Smell A, Ca..
Credits. This page was last revised on July 21, 2021. It was originally submitted on October 18, 2006, by Karen Key of Sacramento, California. This page has been viewed 7,210 times since then and 362 times this year. Last updated on October 10, 2007, by Karen Key of Sacramento, California. Photos:   1, 2. submitted on October 18, 2006, by Karen Key of Sacramento, California. • J. J. Prats was the editor who published this page.
Share this page.