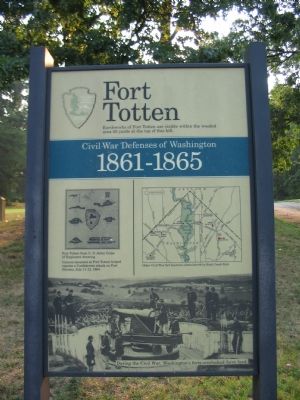 Photographed By Craig Swain, August 4, 2007
1. Fort Totten Marker
Inscription.
Fort Totten. Civil War Defenses of Washington. Earthworks of Fort Totten are visible within the wooded area 50 yards at the top of this hill., Cannon mounted at Fort Totten helped repulse a Confederate attack on Fort Stevens, July 11-12, 1864. . This historical marker was erected by National Park Service, U.S. Department of the Interior. It is in Fort Totten in Washington District of Columbia

Earthworks of Fort Totten are visible within the wooded area 50 yards at the top of this hill.

Topics and series. This historical marker is listed in these topic lists: Forts and Castles • War, US Civil. In addition, it is included in the Defenses of Washington series list. A significant historical date for this entry is July 11, 1767. 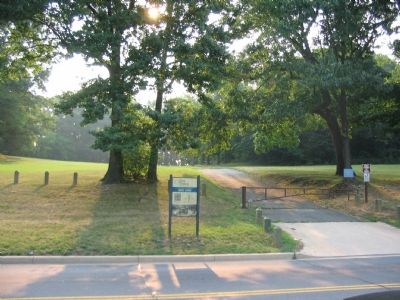 Photographed By Craig Swain, August 4, 2007
2. Fort Totten
The wooded hill in the background are the remains of the fort.

More about this marker. The marker displays a diagram of "Fort Totten from U.S. Army Corps of Engineers drawing," on the left. On the right is a map showing "Other Civil War fort locations administered by Rock Creek Park," with Fort Totten indicated with a red dot. The lower portion of the marker is a photograph from the war of a cannon mounted at one of Washington, DC's forts, "During the Civil War, Washington's forts overlooked farm land." The photograph is of a 100-pdr Parrott Rifled Cannon in place at Fort Totten during the war.

Additional commentary.
1. Fort Totten(s)
There are at least three Fort Tottens, all named after Brigadier General Joseph Totten (1788-1864), Chief of the US Army Corps of Engineers. The one here in Washington, DC was probably the first. Later a second Fort Totten was erected in Bismark, North Dakota. Finally in 1898 the "Fort at Willet's Point" defending New York City was renamed Fort Totten after the long serving General.
— Submitted October 15, 2007, by Craig Swain of Leesburg, Virginia. 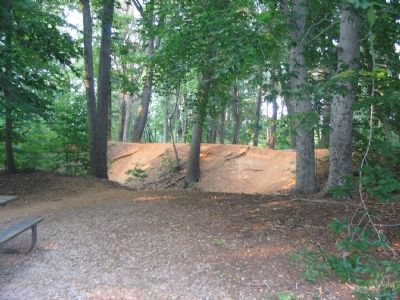 Photographed By Craig Swain, August 4, 2007
3. Fort Totten
The remains of the fort stand within the wooded lot, and have suffered somewhat from foot and bicycle traffic.
2. Fort Totten Particulars
From "Mr. Lincoln's Forts: A Guide to the Civil War Defenses of Washington," by Benjamin Franklin Cooling III and Walton H. Owen II:

— Submitted October 15, 2007, by Craig Swain of Leesburg, Virginia.
3. Joseph G. Totten
Joseph G. Totten served an incredible twenty-five years as the Chief of Engineers. His military service started in 1805 with a commission after graduation from West Point. He served in the War of 1813 with conspicuous gallantry, and later in the Mexican War. He supervised construction of the ring of forts around Washington during the Civil War. He died of pneumonia in 1864. 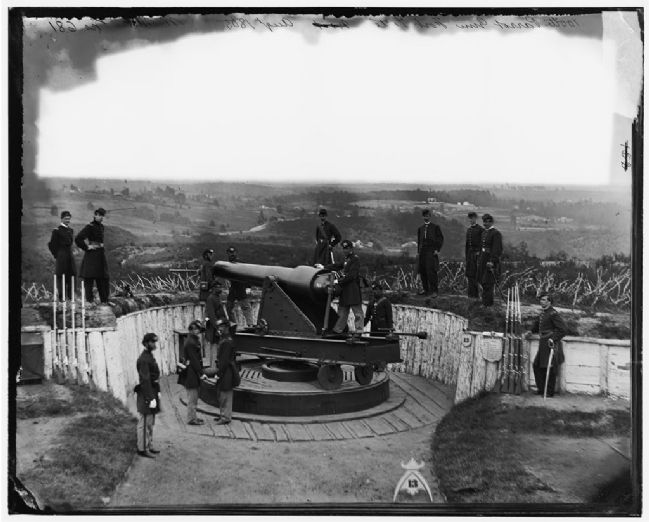 Civil War Photographs, Library of Congress
4. Civil War Photograph of the 100-pdr Parrott
This photograph was used on the marker's lower section. Notice the rolling farmland in the background. The terrain here has changed dramatically in the last 140 years. (Civil War photographs, 1861-1865 / compiled by Hirst D. Milhollen and Donald H. Mugridge, Washington, D.C. : Library of Congress, 1977. No. 0775)
— Submitted March 8, 2016. 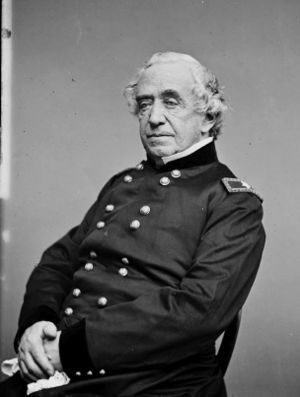 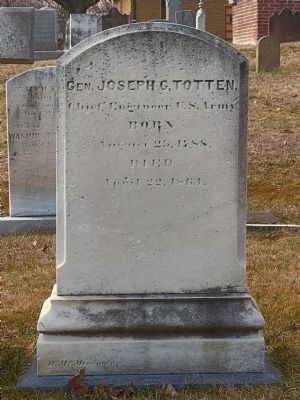