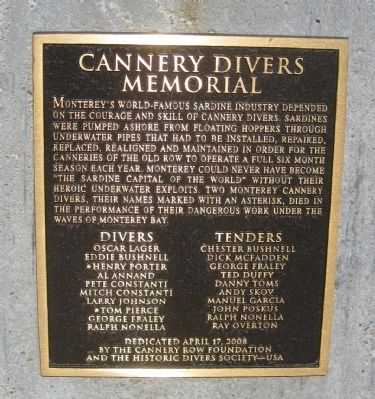 Monterey's world-famous sardine industry depended on the courage and skill of cannery divers. Sardines were pumped ashore from floating hoppers through underwater pipes that had to be installed, repaired, replaced, realigned and maintained in order for the canneries of the Old Row to operate on a full six month season each year. Monterey could never have become "The Sardine Capital of the World" without their heroic exploits. Two Monterey divers, their named marked with an asterisk, died in the performance of their dangerous work under the waves of Monterey Bay.


Dedicated April 17, 2008
By the Cannery Row Foundation
and the Historic Divers Society - USA 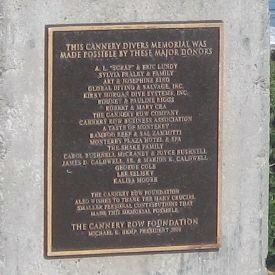 More about this memorial. The marker is mounted on a cement monument on the promenade at San Carlos Beach Park, a few hundred feet southeast of Cannery Row.

Also see . . .
1. Historic Cannery Divers Memorial Project. The Cannery Row Foundation's page for the Divers Memorial. Includes plans for the memorial, photographs of the casting of the dive helmet, as well as a couple of historic photographs. (Submitted on April 22, 2010.) 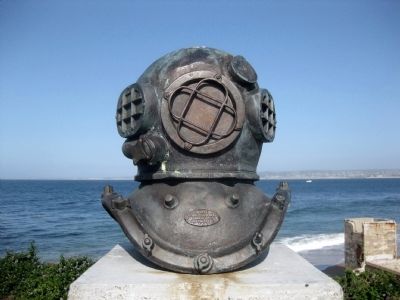 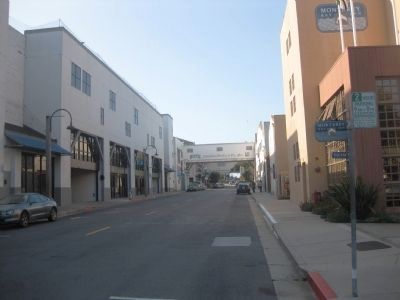 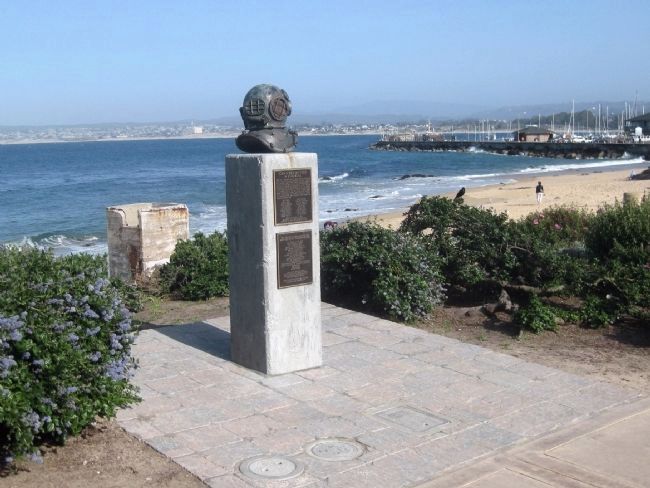 By Andrew Ruppenstein, March 22, 2010
5. Cannery Divers Memorial Marker - wide view
From an interpretive sign about 200 feet east of the memorial: "In the 1930s canneries were big business. Canneries lined the streets until the sardine populations plunged and the industry went bust in the early 1950's. Today, squid is the bay's biggest fishery, and tourism is Cannery Row's major industry."
Credits. This page was last revised on November 6, 2019. It was originally submitted on April 22, 2010, by Andrew Ruppenstein of Sacramento, California. This page has been viewed 2,658 times since then and 130 times this year. Photos:   1, 2, 3, 4, 5. submitted on April 22, 2010, by Andrew Ruppenstein of Sacramento, California. • Syd Whittle was the editor who published this page.
Share This Page.