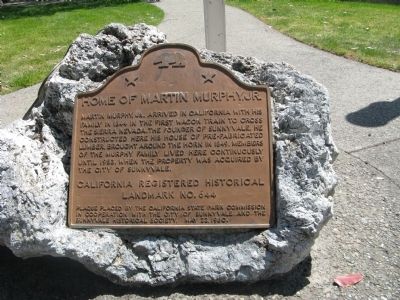 Martin Murphy, Jr. arrived in California with his family in 1844 in the first wagon train to cross the Sierra Nevada. The founder of Sunnyvale, he constructed here his house of pre-fabricated lumber brought around the Horn in 1849. Members of the Murphy family lived here continuously until 1953, when the property was acquired by the City of Sunnyvale.

Topics and series. This historical marker is listed in these topic lists: Roads & Vehicles • Settlements & Settlers. In addition, it is included in the California Historical Landmarks series list. A significant historical year for this entry is 1844.

Location. 37° 22.926′ N, 122° 1.58′ W. Marker is in Sunnyvale, California, in Santa Clara County. Marker can be reached from North Sunnyvale Avenue east of East California Avenue. Marker is located at the Martin Murphy Historic Park. Parking is available via E. California Street. Touch for map. Marker is in this post office area: Sunnyvale CA 94086, United States of America. Touch for directions. 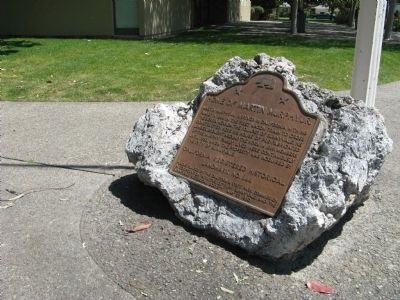 By Syd Whittle, April 25, 2010
2. Home of Martin Murphy, Jr. Marker
On the reverse side of this rock base is a Juan Bautista de Anza Expedition Trail marker and a Heritage 76 Bicentennial Landmark Plaque.

Regarding Home of Martin Murphy, Jr.. This site was designated as California Registered Historical Landmark No. 644 on April 28, 1958.

The house was demolished by the City of Sunnyvale in 1961 due to extensive damage caused by a fire.

Also see . . .  The Murphy Family. The Martin Murphy party crossed the plains in 1844 to California. They were the first 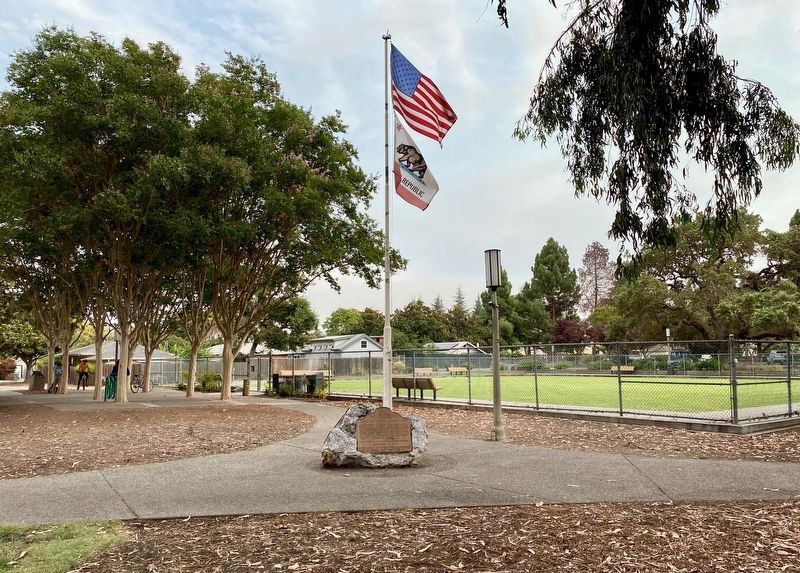 August 17, 2020
3. Home of Martin Murphy, Jr. Marker - wide view
party to cross the Sierras in a covered wagon, the first to bring oxen across the plains and the first to use the route now used by Union and Pacific Railroads. The Donner party used the route two years later and Martin Murphy, Jr. was a member of the party who rescued them.
The Heritage Park Museum offers an historic photo of the Murphy House. (Submitted on April 27, 2010.)
Credits. This page was last revised on August 18, 2020. It was originally submitted on April 27, 2010, by Syd Whittle of Mesa, Arizona. This page has been viewed 1,659 times since then and 18 times this year. Photos:   1, 2. submitted on April 27, 2010, by Syd Whittle of Mesa, Arizona.   3. submitted on August 18, 2020.
Share This Page.