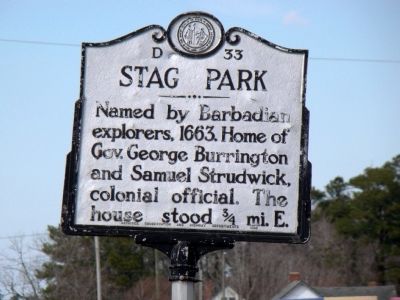 Topics and series. This historical marker is listed in these topic lists: Colonial Era • Exploration • Government & Politics. In addition, it is included in the North Carolina Division of Archives and History series list. A significant historical year for this entry is 1663. 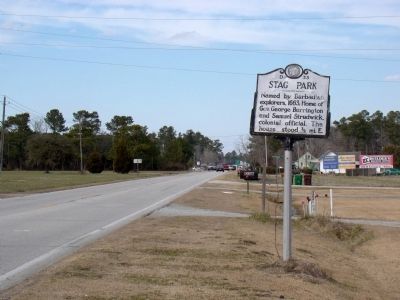 More about this marker. “Barbadians” are people from the Caribbean island of Barbados.

Additional commentary.
1. The Sale of Stag Park by a George Burrington to Samuel Strudwick
This Indenture made the 27th day of September in the First year of the Reign of Our Sovereign Lord George the third by the Grace of God of Great Britain France and Ireland King Defender of the Faith & so forth, and in the Year of our Lord 1761. Between Lieutenant General John Guise of Great George Street by Hanover Square in the County of Middx of the one part and Samuel Strudwick of Princess Street by Cavendish Square in the said County Esqr of the other part.

Also with all Stock of Negroes or other Slaves now or Lately or which at any time hereafter may be resident on the said plantations with their issue & all the Cattle, Utensils or other Stock, which now are or is or at any time hereafter may be in or upon the said plantations or either of them, or any part of them or either of them; and Also all other the plantations, Messuages, Lands, Tenements, or Hereditaments whatsoever of him the said George Burrington in possession Reversion or Expectancy within the said province of North Carolina or else where in America, and all the Estate, Right, Title, Interest, use, trust, possession, property, claim, demand & Equity of Redemption of him the said George Burrington of in or to the same every or any part thereof or of the said Lieutenant General John Guise together with all Charters Grants Surveys or other Deeds Evidences or writings any ways relating to the said premises or any part thereof now in the Custody or power of the said George Burrington or the said Lieutenant General John Guise or of any person or persons in trust for him or them.

To have and to hold the said plantations or Tracts of Land, Messuages, Buildings, Lands, Tenements, Hereditaments, Negroes, and all & singular other the premises hereby Granted bargained and Sold or intended to be unto the said Samuel Strudwick Esqr his Executors Administrators or Assigns for one whole year Commencing from the day next before the day of the date of these presents for and during and until the full end and term of one whole year from thence next ensuing and fully to be compleated and ended. Yeilding and paying therefor at the end of the said Term the Rent of One peper Corn only (if lawfully demanded)

To the Intent that by Virtue of these presents, and also by force of the Statute made for transferring of uses into possession The said Samuel Strudwick Esqr may be thereby enabled to accept & take a Grant and Release of the Reversion and Inheritance thereof to him and his heirs for ever.

—In Witness whereof the said parties first above named have to these presents set their hands and seals the day and Year first above written. Sealed and delivered (being first duly Stampt) in the presence of Wm Welton Bow Street Covent Garden Nº 9. —GEORGE BURRINGTON