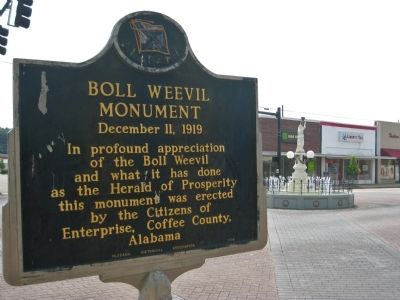 Photographed By AGS Media, July 12, 2009
1. Boll Weevil Monument Marker
with Monument to the right in the distance
Inscription.
Boll Weevil Monument. December 11, 1919. In profound appreciation of the Boll Weevil and what it has done as the Herald of Prosperity this monument was erected by the Citizens of Enterprise, Coffee County, Alabama . This monument was erected in 1974 by Alabama Historical Association. It is in Enterprise in Coffee County Alabama

In profound appreciation of the Boll Weevil and what it has done as the Herald of Prosperity this monument was erected by the Citizens of Enterprise, Coffee County, Alabama

Topics and series. This historical marker and monument is listed in these topic lists: Agriculture • Animals • Industry & Commerce. In addition, it is included in the Believe It or Not series list.

Location. 31° 18.865′ N, 85° 51.231′ W. Marker is in Enterprise, Alabama, in Coffee County. Marker is at the intersection of Main Street (U.S. 84) and College Street, on the right when traveling north on Main Street. Located at the center of downtown Enterprise. Marker stands east by south from the Boll Weevil Monument, which sits in the center of the intersection. Touch for map. Marker is in this post office area: Enterprise AL 36330, United States of America. Touch for directions.

Other nearby markers. At least 8 other markers are within 8 miles of this marker, measured as the crow flies. Rawls Hotel (within shouting distance of this marker); Enterprise Depot (about 400 feet away, measured in a direct line); First United Methodist Church 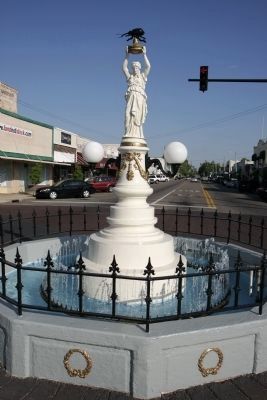 Photographed By Alabama Department of Tourism, circa 2009
2. Boll Weevil Monument

Regarding Boll Weevil Monument. The Boll Weevil Monument is a statue depicting a female figure holding aloft a large trophy topped with a boll weevil. This stands on a base which also supports two streetlamps, which is surrounded by a fountain and concrete/iron railing. Caution should be used in approaching it due to its location at the center of the intersection.

Said to be the world's only monument to an agricultural pest, the monument celebrates how the people of Enterprise adjusted in the face of adversity after boll weevils decimated the area's cotton crops. The infestation forced farmers to diversify by planting peanuts and other crops, a practice which ultimately was more lucrative than relying on cotton alone. 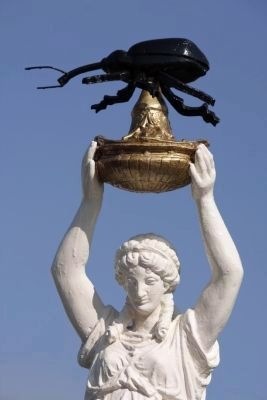 Photographed By Alabama Department of Tourism, circa 2009
3. The Boll Weevil
. (Submitted on February 23, 2013, by Cleo Robertson of Fort Lauderdale, Florida.)

Additional commentary.
1. Original Boll Weevil Monument
This is not the original Boll Weevil Monument. If you go to the old Enterprise Depot, you can take the museum tour ($2.00) and read the story about the original monument containing a flowing fountain atop the figure rather than the huge insect likeness that sits there now. You can learn the historic controversy the monument has endured over the years, including vandalism, malicious practical jokes and even theft, and can view the remnants of the original fountain on top of the statue before it was replaced with the strange Boll Weevil you now see.
— Submitted February 23, 2013, by Cleo Robertson of Fort Lauderdale, Florida. 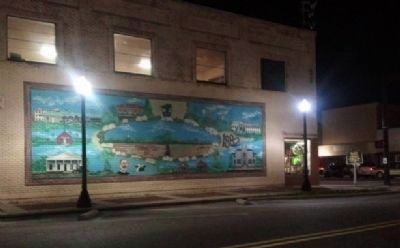 Photographed By Robert Cole, February 14, 2013
4. Wall Mural Near the Boll Weevil Marker
Painted mural close to the marker and monument representing the history of Enterprise, Alabama. 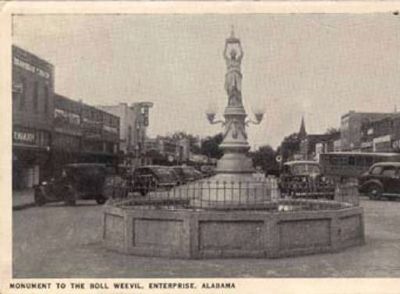 Photographed By Unknown, circa late 1930s
5. Original Boll Weevil Monument
Postcard entitled, "Monument to the boll weevil, Enterprise, Alabama." Digital reproduction of original photo in the Alabama Writers' Project photograph collection, file #Q2066, accessed at http://digital.archives.alabama.gov/cdm/singleitem/collection/photo/id/2505. Date of photograph is estimated based on original structure and vehicular traffic in the vicinity.
Credits. This page was last revised on July 7, 2022. It was originally submitted on May 2, 2010, by Glenn Sheffield of Tampa, Florida. This page has been viewed 3,860 times since then and 59 times this year. It was the Marker of the Week December 12, 2010. Photos:   1. submitted on May 2, 2010, by Glenn Sheffield of Tampa, Florida.   2, 3. submitted on July 22, 2010.   4, 5. submitted on February 23, 2013, by Cleo Robertson of Fort Lauderdale, Florida. • Kevin W. was the editor who published this page.
Share this page.