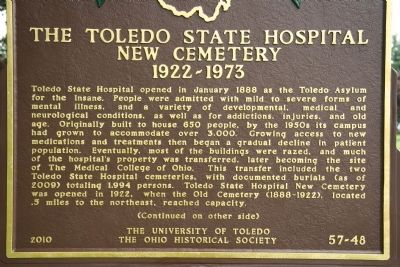 Toledo State Hospital opened in January 1888 as the Toledo Asylum for the Insane. People were admitted with mild to severe forms of mental illness, and a variety of developmental, medical and neurological conditions, as well as for addictions, injuries, and old age. Originally built to house 650 people, by the 1950s its campus had grown to accommodate over 3,000. Growing access to new medications and treatments then began a gradual decline in patient population. Eventually, most of the buildings were razed, and much of the hospital's property was transferred, later becoming the site of The Medical College of Ohio. This transfer included the two Toledo State Hospital cemeteries, with documented burials (as of 2009) totaling 1,994 persons. Toledo State Hospital New Cemetery was opened in 1922, when the Old Cemetery (1888-1922), located .5 miles to the northeast, reached capacity. (continued on other side)

(continued from other side) 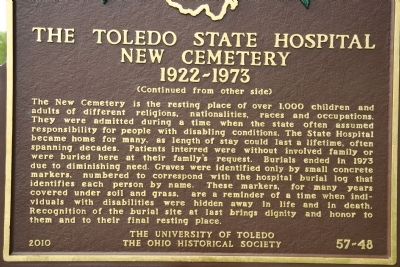 Photographed By Dale K. Benington, May 16, 2010
2. The Toledo State Hospital New Cemetery, 1922-1973 Marker
View of the reverse side of the historic marker

Click or scan to see
this page online
The New Cemetery is the resting place of over 1,000 children and adults of different religions, nationalities, races and occupations. They were admitted during a time when the state often assumed responsibility for people with disabling conditions. The State Hospital became home for many, as length of stay could last a lifetime, often spanning decades. Patients interred were without involved family or were buried here at their family's request. Burials ended in 1973 due to diminishing need. Graves were identified only by small concrete markers, numbered to correspond with the hospital burial log that identifies each person by name. These markers, for many years covered under soil and grass, are a reminder of a time when individuals with disabilities were hidden away in life and in death. Recognition of the burial site at last brings dignity and honor to them and to their final resting place.

Erected 2010 by The University of Toledo and The Ohio Historical Society. (Marker Number 57-48.)

Topics and series. This historical marker is listed in this topic list: Cemeteries & Burial Sites. In addition, it is included in the Ohio Historical Society / The Ohio History Connection series list. A significant historical month for this entry is January 1888. 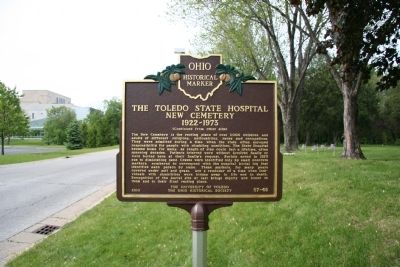 Photographed By Dale K. Benington, May 16, 2010
3. The Toledo State Hospital New Cemetery, 1922-1973 Marker
View of historical marker in the center foreground with a view of East Campus Drive to the left of the marker and the front of the cemetery being situated to the right of the marker
Toledo, Ohio, in Lucas County. It is in Glendale-Heatherdowns. Marker is on East Campus Drive, 0.3 miles south of Arlington Avenue, on the right when traveling north. This historical marker is located in the southeastern corner of the University of Toledo Medical College campus, on the east side of the of the road, just across the street from an entrance to a school parking lot on campus. Touch for map. Marker is in this post office area: Toledo OH 43614, United States of America. Touch for directions. 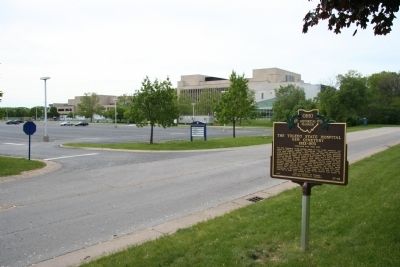