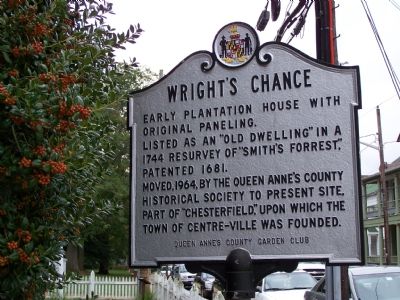 By Beverly Pfingsten, October 19, 2007
1. Wright's Chance Marker
Inscription.
Wright’s Chance. . . Early plantation house with original paneling. . . Listed as an “old dwelling” in a 1744 resurvey of “Smith’s Forrest,” patented 1681. . . Moved 1964 by the Queen Anne’s County Historical Society to present site, part of “Chesterfield”, upon which the Town of Centre-ville was founded. . This historical marker was erected by Queen Anne’s County Garden Club. It is in Centreville in Queen Anne's County Maryland

Moved 1964 by the Queen Anne’s County Historical Society to present site, part of “Chesterfield”, upon which the Town of Centre-ville was founded.

Location. 39° 2.633′ N, 76° 3.933′ W. Marker is in Centreville, Maryland, in Queen Anne's County. Marker is on Maryland Route 213 south of Water Street, on the right when traveling north. Touch for map. Marker is in this post office area: Centreville MD 21617, United States of America. Touch for directions. 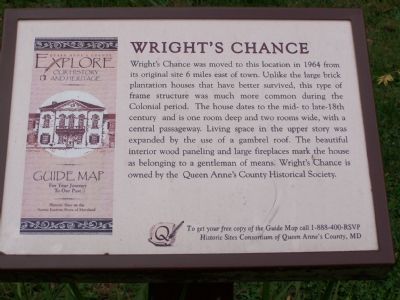 By Beverly Pfingsten, October 19, 2007
2. Queen Anne's County Marker at site.
Wright's Chance. Wright's Chance was moved to this location in 1964 from its original site 6 miles east of town. Unlike the large brick plantation houses that have survived, this type of frame structure was much more common during the Colonial period. The house dates from the mid to late-18th century and is one room deep and two rooms wide with a central passageway. Living space in the upper story was expanded by the use of a grambel roof. The beautiful interior wood paneling and large fireplaces mark the house as belonging to a gentleman of means. Wrights Chance is owned by the Queen Anne's County Historical Society.
of this marker); Centreville National Bank of Maryland (about 300 feet away, measured in a direct line); The Brass Pin (about 300 feet away); Queen Anne's County Courthouse (about 300 feet away); Site of Goldsborough House (about 400 feet away). Touch for a list and map of all markers in Centreville. 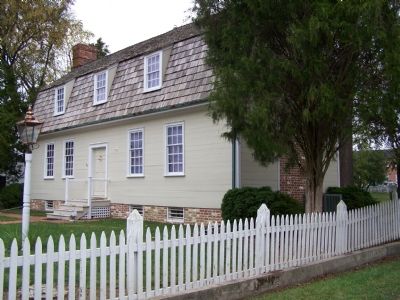