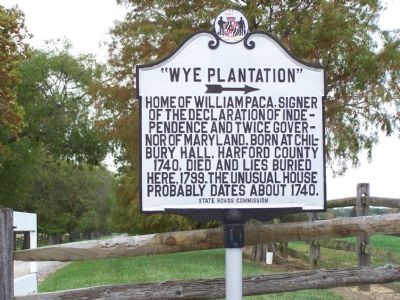 By Beverly Pfingsten, October 19, 2007
1. "Wye Plantation" Marker
House is on private property and cannot be seen from the road.
Inscription.
“Wye Plantation”. →. Home of William Paca, signer of the Declaration of Independence and twice Governor of Maryland. Born at Chilbury Hall, Harford County 1740. Died and lies buried here, 1799. The unusual house probably dates about 1740. . This historical marker was erected by State Roads Commission. It is Near Carmichael in Queen Anne's County Maryland

Home of William Paca, signer of the Declaration of Independence and twice Governor of Maryland. Born at Chilbury Hall, Harford County 1740. Died and lies buried here, 1799. The unusual house probably dates about 1740.

Topics and series. This historical marker is listed in these topic lists: Colonial Era • Settlements & Settlers • War, US Revolutionary. In addition, it is included in the Signers of the Declaration of Independence series list.

Location. 38° 54.975′ N, 76° 7.509′ W. Marker is near Carmichael, Maryland, in Queen Anne's County. Marker is on Carmichael Road 0.2 miles north of Wye Island Road, on the left when traveling south. Touch for map. Marker is in this post office area: Queenstown MD 21658, United States of America. Touch for directions.

Other nearby markers. At least 8 other markers are within 3 miles of this marker, measured as the crow flies. Wye Island (about 500 feet away, measured in a direct line); “Cheston on Wye” (approx. 1.1 miles away); Site of Stagwell (approx. 1½ miles away); Governor Robert Wright 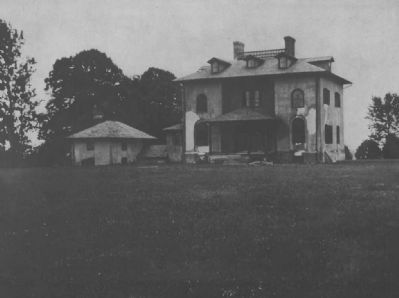 2. Wye Hall from Maryland Department of Assessments and Taxation. (Submitted on February 22, 2015, by J. Makali Bruton of Querétaro, Mexico.)

Additional comments.
1. Wye Platation House
This house was unconscionably demolished by its owner, Arthur Houghton, in the 1960s. He later built a replica that is now part of the Aspen Wye Conference Center.
— Submitted November 3, 2007, by Maryland historian of Chestertown, Maryland. 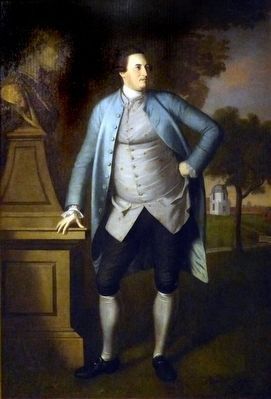 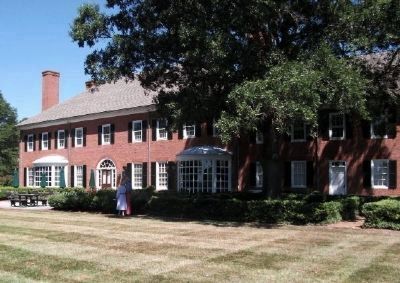 By Craig O, July 4, 2010
4. “Wye Plantation” Replica
A drive now takes you to Houghton House, part of the Aspen Wye River Conference Center. The existing building is a replica of the original "Wye Plantation". The gardens between the house and the shoreline are original. View is of the south facade.
Not to be confused with "Wye House" Plantation.
Credits. This page was last revised on November 22, 2019. It was originally submitted on October 24, 2007, by Bill Pfingsten of Bel Air, Maryland. This page has been viewed 3,541 times since then and 16 times this year. Photos:   1. submitted on October 24, 2007, by Bill Pfingsten of Bel Air, Maryland.   2. submitted on February 22, 2015, by J. Makali Bruton of Querétaro, Mexico.   3. submitted on May 4, 2016, by Allen C. Browne of Silver Spring, Maryland.   4. submitted on July 4, 2010, by Craig O'donnell of Still Pond, Maryland. • Kevin W. was the editor who published this page.
Share This Page.