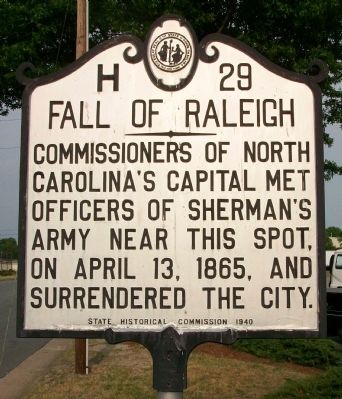 Photographed By Robert Cole, May 15, 2010
1. Fall of Raleigh Marker
Inscription.
Fall of Raleigh. . Commissioners of North Carolina's capital met officers of Sherman's Army near this spot, on April 13, 1865, and surrendered the city. . This historical marker was erected in 1940 by State Historical Commission. It is in Raleigh in Wake County North Carolina

Commissioners of North Carolina's capital met officers of Sherman's Army near this spot, on April 13, 1865, and surrendered the city.

Topics and series. This historical marker is listed in this topic list: War, US Civil. In addition, it is included in the North Carolina Division of Archives and History series list. A significant historical date for this entry is April 13, 1865.

Location. 35° 45.537′ N, 78° 38.311′ W. Marker is in Raleigh, North Carolina, in Wake County. Marker is on City Farm Road, 0.2 miles east of South Wilmington Street, on the right when traveling east. Marker is located in front of Cardinal International Trucks and across the street from the Capital Area Transit facility. Touch for map. Marker is at or near this postal address: 150 City Farm Road, Raleigh, NC 27603, Raleigh NC 27603, United States of America. Touch for directions.

Other nearby markers. At least 8 other markers are within walking distance of this marker. Mount Hope Cemetery (approx. half a mile away); Student Nonviolent Coordinating Committee (approx. ¾ mile away); Leonard Medical School (approx. 0.8 miles away); Estey Hall

Photographed By Robert Cole, May 15, 2010
2. Fall of Raleigh Marker
Marker is located in an commercial area south of downtown Raleigh between South Wilmington and South Blount Streets.

Regarding Fall of Raleigh. After the Civil War began, Governor Zebulon Baird Vance ordered the construction of breastworks around the city as protection from Union troops. During General Sherman's Carolinas Campaign, Raleigh was captured by Union cavalry under the command of General Hugh Judson Kilpatrick on April 13, 1865. After the Confederate cavalry retreated west, the Union soldiers followed, leading to the nearby Battle of Morrisville. The city was spared significant destruction during the War, but due to the economic problems of the post-war period and Reconstruction, it grew little over the next several decades. 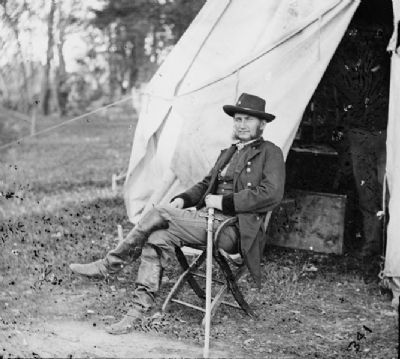 Photographed By Timothy H. O'Sullivan, circa September 1863
3. General Hugh Judson Kilpatrick, USA
Kilpatrick was aggressive, fearless, ambitious, and blustery. He was a master, in his mid-twenties, of using political influence to get ahead. His men had little love for his manner and his willingness to exhaust men and horses and to order suicidal mounted cavalry charges. Kilpatrick served with Sherman through his "March to the Sea" to Savannah and north in the Carolinas Campaign. He delighted in destroying Southern property. Kilpatrick accompanied Maj. Gen. William T. Sherman to the surrender negotiations held at Bennett Place near Durham, North Carolina, on April 17, 1865.
Click for more information.
Sherman 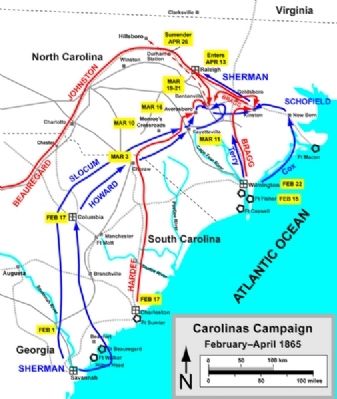 Photographed By Hal Jespersen, March 29, 2006
4. Movements in Carolinas Campaign
Sherman's Carolina Campaign, in which his troops marched 425 miles (684 km) in 50 days, had been similar to his march to the sea through Georgia, although physically more demanding. However, the Confederate forces opposing him were much smaller and more dispirited. When Joseph E. Johnston met with Jefferson Davis in Greensboro in mid-April, he told the Confederate president: "Our people are tired of the war, feel themselves whipped, and will not fight. Our country is overrun, its military resources greatly diminished, while the enemy's military power and resources were never greater and may be increased to any extent desired. ... My small force is melting away like snow before the sun."
Credits. This page was last revised on July 2, 2021. It was originally submitted on June 5, 2010, by Cleo Robertson of Fort Lauderdale, Florida. This page has been viewed 1,392 times since then and 116 times this year. Photos:   1, 2, 3, 4. submitted on June 6, 2010, by Cleo Robertson of Fort Lauderdale, Florida. • Craig Swain was the editor who published this page.
Share this page.