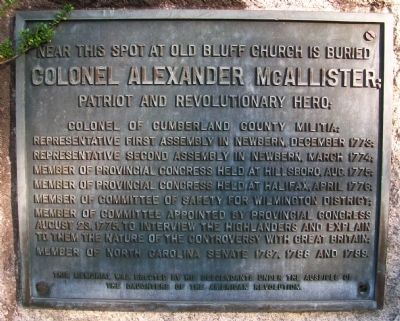 Erected by Descendants of Alexander McAllister, under the auspices of the Daughters of the American Revolution.

Topics and series. This historical marker is listed in these topic lists: Colonial Era • Government & Politics • Patriots & Patriotism • War, US Revolutionary. In addition, it is included in the Daughters of the American Revolution series list. A significant historical year for this entry is 1773. 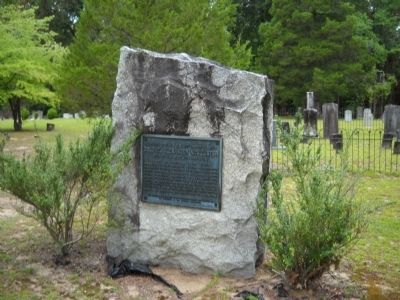 More about this marker. Mounted on a large stone in front of a wrought iron fenced area of the cemetery.

John became a surgeon, but little can be found of Robert who, however, was recorded as witness to a document at Lochgair in 1724, in respect of a declaration by Hector McAlister of Loup. Coll, the eldest, sold Balinakill in 1739, and emigrated to North Carolina. At this time, 5 Scottish gentlemen and some 90 poor families totaling 350 souls in all, sailed from Campbelltown and Gigha on 6 June 1739 on the ship "Thistle" of Saltcoats, Ayrshire. The old Campbelltown Customs records show the ship to be "embarking passengers 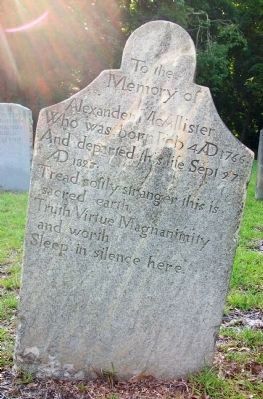 By Robert Cole, June 8, 2010
4. Alexander McAllister Headstone (Son)
This headstone marks the grave of Alexander McAllister born 1766 is Colonel McAllister's son. It reads:
"To the Memory of Alexander McAllister, Who was born Feb 4 AD 1766, And departed this life Sept 27 AD 1823. Tread softly stranger this is sacred earth. Truth Virtue Magnaninity and worth, Sleep in silence here."
for Cape Fair." The other four gentlemen were McNeills and Campbells and were mostly relations by marriage.

Recent research uncovered the complete document signed by Coll McAlester and later by Janet McNeill, his spouse, at Skerrols in Islay on 10 May 1739. An old letter which has survived records the ship at Gigha taking on more passengers. This was written by John McAlister of Cown to his relatives in North Carolina. In 1740 all these gentlemen were given large land grants and exemption from taxes together with a money grant to help establish themselves in their new country. This was the first large emigration of Scots settlers to America recorded, and all came from the mainland of Kintyre and the adjacent islands of Islay, Gigha and Jura.

Coll McAlister and Janet McNeill had a family of two sons: Alexander, born in 1715, and Hector born in 1716, together with three daughters, Grissella, who died unmarried, Isabella, who married Farquhard Campbell and Mary, who married Hector McNeill. Alexander McAlister was thrice married. His first wife died shortly after their marriage and was buried at sea on a return voyage to Carolina in 1740. They had no children. His second wife was Flora McNeill, a daughter of Neill McNeill and Grissella Campbell. They had four children: Coll, Grissella, Janet and Neill. His third wife was Jane Colvin who was, according to historians, 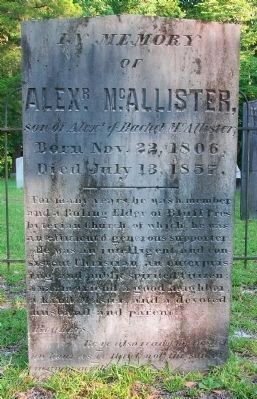 By Robert Cole, June 6, 2010
5. Alexander McAllister Gravesite (Grandson)
This headstone marks the grave of one of the Colonel's grandsons, the son of the Alexander McAllister whose headstone is featured in the previous photograph. This headstone reads:
"In memory of ALEXr McALLISTER, son of Alex & Rachel McAllister, born Nov 22, 1806, Died July 13, 1857. For many years, he was a member and a Ruling Elder of Bluff Presbyterian Church of which he was a efficient & generous supporter. He was an intelligent and consistent Christian; an enterprising and public spirited Citizen; a warm friend, a good neighbor, a find Master, and a devoted husband and parent. Readers, Be ye also ready, for in such an hour as ye think not, the son of man shall return for ye."
born at sea when her parents emigrated in 1740. This marriage was recorded on July 14, 1763.

In letters preserved between Alexander and his brother Hector on the island of Arran, he gives details of his family. Alexander, later Colonel Alexander McAlister, became a great patriot and became a prominent figure in North Carolina, becoming a member of the N.C. Senate in 1787. A monument erected to his memory commemorates his many achievements.

Hector McAlister returned to Scotland after selling off his estates and settled on the island of Arran, adjacent to east Kintyre. The Jacobite rebellion was soon to break out all over western Scotland and he, being true to the Stuart cause, was given money to raise a force of men to support Prince Charles Edward Stuart. This force was unable to leave the island since Archibald McAlister of Tarbert was an ardent Hanoverian, and despite the fact that his Clan Chief Angus McAlester of Loup supported the Jacobite cause, Tarbert allowed Lord Loudon's regiment to be stationed at Tarbert to prevent anyone from sailing to join Prince Charles. Hector McAlister was denounced as a rebel and Government forces ordered to apprehend him. Those apprehended were to be imprisoned in Dumbarton Castle near Glasgow. After many months in hiding among the hills of Arran, he evaded capture and was later pardoned. On one occasion he was hiding underneath 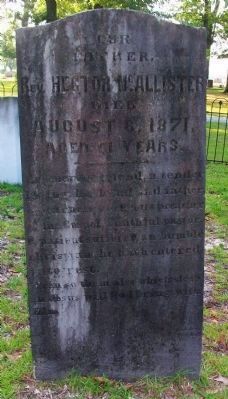 By Robert Cole, June 6, 2010
6. Rev. Hector McAllister (Grandson)
This headstone marks the grave of another of the Colonel's grandsons, also the son of the Alexander McAllister whose headstone is featured above. This headstone reads:
"Our Father, Rev. Hector McAllister, died August 8, 1871, aged 61 years." Memorial and spiritual blessing follows.
some straw bales in a barn when soldiers searched it, but although they prodded the bales with their pikes, he was not detected or injured. He was later pardoned in 1746 and married Mary Fullarton of Corseby, Ayrshire, a daughter of an old Norman family. This family had extensive lands near Ayr. He was given the tenancy of the farms of Monyquil and Glaister, and became a prominent member of the island community. He was also a member of the committee instrumental in getting a ferry service from Arran to the mainland. The family born in Arran consisted of one son, Charles, and five daughters.