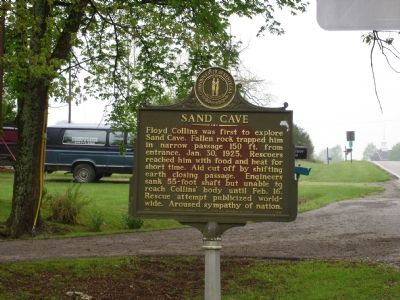 Photographed By Trinket Troy, April 26, 2006
1. Sand Cave Marker
Inscription.
Sand Cave. . Floyd Collins was first to explore Sand Cave. Fallen rock trapped him in narrow passage 150 ft. from entrance, Jan. 30, 1925. Rescuers reached him with food and heat for short time. Aid cut off by shifting earth closing passage. Engineers sank 55-foot shaft but were unable to reach Collins' body until February 16. Rescue attempt publicized worldwide. Aroused sympathy of nation. . This historical marker was erected in 1970 by The Kentucky Historical Society and the Department of Highways. It is in Cave City in Edmonson County Kentucky

Erected 1970 by The Kentucky Historical Society and the Department of Highways. (Marker Number 1385.)

Topics and series. This historical marker is listed in these topic lists: Natural Features • Notable Events. In addition, it is included in the Believe It or Not, and the Kentucky Historical Society series lists. A significant historical date for this entry is January 30, 1925.

More about this marker. Marker is next to the Wayfarer Hotel, where there is a museum, and a path to the cave entrance.