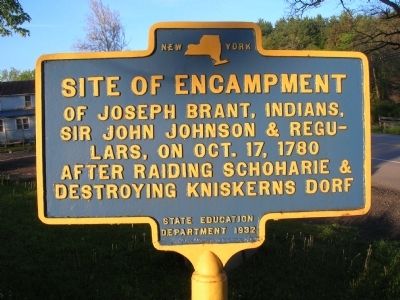 Photographed By Howard C. Ohlhous, May 24, 2008
1. Site Of Encampment Marker
Inscription.
Site Of Encampment of Joseph Brant, Indians, Sir John Johnson and Regulars, On Oct. 17, 1780 after raiding Schoharie and destroying Kniskerns Dorf . This historical marker was erected in 1932 by New York State Education Department. It is in Sloansville in Schoharie County New York

Topics. This historical marker is listed in these topic lists: Native Americans • War, US Revolutionary. A significant historical year for this entry is 1780.

Location. 42° 44.775′ N, 74° 19.596′ W. Marker is in Sloansville, New York, in Schoharie County. Marker is on New York State Route 30A, on the right when traveling north. The marker is beside the Sloansville Valley Cemetery. Touch for map. Marker is in this post office area: Sloansville NY 12160, United States of America. Touch for directions. 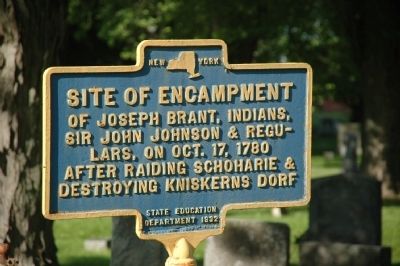 1. KNISKERN'S DORF
The word "dorf" is from a German word for Village, and in this case Dorf means a compact farmer's town or small village.


KNISKERN'S DORF
One of the earliest settlements within the Schoharie area was named for a Palatine list master name Johann Peter Kniskern a descendant of one of the oldest families in the town of Reinheim in the old Paletinate (Germany). He arrived in America with the Palatine immigration of 1710. During the 1711 Colonial War with Canada he served as a Captain with the Palatine Volunteers. Kniskern became a naturalized citizen on Oct. 11, 1715 paving they way for his later purchase of land from the British Government. He after leaving the camps on the Hudson had settled in Neu-Heidelberg (Kniskern's Dorf) by 1716/17 according to research done by Frank E. Lichtenthaeler and Hank Z. Jones. While the Palatines settled here based on promises from the British Government, they did not have any written title to the lands. After the British Government failed in attempts to arrange an agreement with the Palatines to purchase the land they were living on the government sold the land to others in 1714. Eventually the Palatines were forced to purchase land or move and many chose the latter. Kniskern being a leader and citizen met with the Royal Government in the Colony of 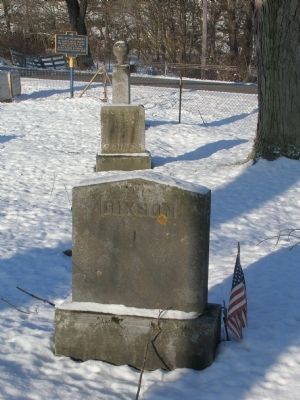 Photographed By Howard C. Ohlhous, March 29, 2008
3. Site Of Encampment Marker
The Marker is beside the road in front of the Sloansville Valley Cemetery.
New York and received a license to negotiate with the Indians to purchase land from them. On September 12, 1729 a purchase agreement for 300 acres of land costing seven pounds in Indian goods was signed by the mark of the turtle and deer by Native Indians Arrundias and Oquarady Soanistiowan. He brought this agreement to the Governor from which a Royal Survey was done. In 1729 letters patent were granted to him for part of the land now called Kniskern's Dorf. The original settlers were Johann Peter Kniskern, Godfrit Kniskern, Lambert Sternberg, Philip Berg, Hendrick Houck, Hendrick Strubach, and Johannes Merkle and at a later date Bartrim Entis and Harmonous.
— Submitted June 17, 2010, by Howard C. Ohlhous of Duanesburg, New York. 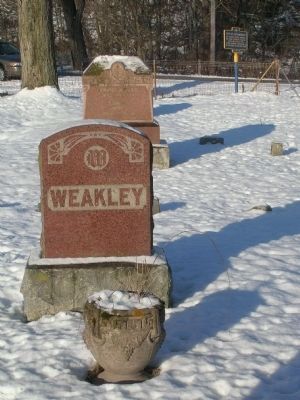 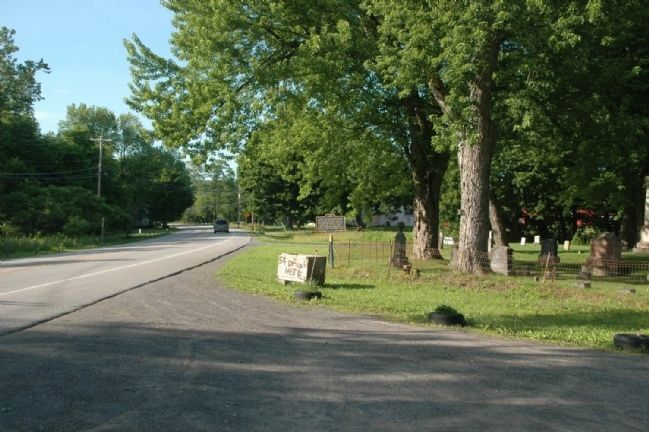