The Last Camp of Hi Jolly 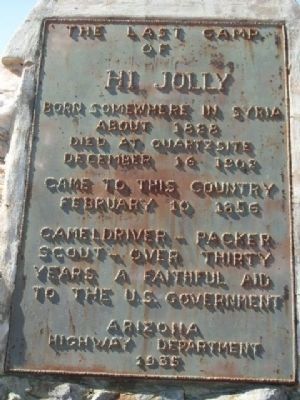 Last Camp
of
Hi Jolly
Born somewhere in Syria
about 1828
Died at Quartzsite
December 16, 1902
Came to this country
February 10, 1856
Camel Driver - Packer
Scout - Over Thirty
Years a faithful aid
to the US Government

Topics. This historical marker is listed in these topic lists: Animals • Cemeteries & Burial Sites • Exploration • Military. A significant historical month for this entry is February 1858. 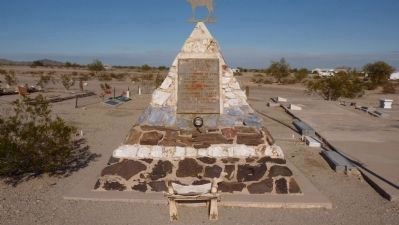 Also see . . .
1. Hi Jolly and the US Camel Corps. Lt. Edward Fitzgerald Beale, for whom Beale’s Cut in Newhall would later be named, led the U.S. Camel Corps on an expedition from Arizona to California in 1857. After the U.S. Army abandoned the short-lived experiment, Beale, who attained the rank of General, used some of the camels as pack animals to carry supplies from Los Angeles to his base at Fort Tejon — passing through the Santa Clarita Valley and, presumably, Beale's Cut, along the way. (Submitted on December 12, 2009, by Chris English of Phoenix, Arizona.)

2. The Great Southwestern Desert Camel Experiment. It was during the 19th century that the camel, of all creatures, became a part of the fabled story of the deserts of the Southwest. The animal’s history in the United States, however, began far earlier, in 1701, when a wealthy sea captain named Crowninshield brought a male and female to Salem, Massachusetts, where he exhibited them as 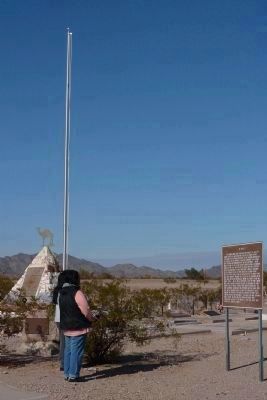 Photographed By Thomas Chris English, December 11, 2009
3. The Last Camp of Hi Jolly Marker
curiosities. A few other camels were imported for exhibition over the next century and a half. (Submitted on December 12, 2009, by Chris English of Phoenix, Arizona.)

3. Hi Jolly - Wikipedia. This Wikipedia article reports the history of Hi Jolly as well as displaying photos of the site and Hi Jolly. (Submitted on December 12, 2009, by Chris English of Phoenix, Arizona.) 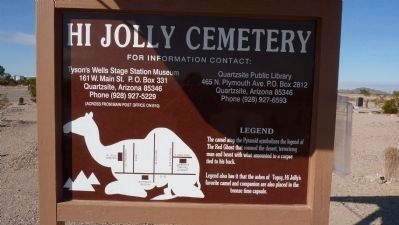 Photographed By Thomas Chris English, December 11, 2009
4. The Hi Jolly Cemetery, Quartsite, AZ
[See Link #4 for information on the Legend of The Red Ghost.]


Legend
The camel atop the Pyramid symbolizes the legend of The Red Ghost that roamed the desert, terrorizing man and beast with what amounted to a corpse tied to his back.

Legend also has it that the ashes of Topsy, Hi Jolly’s favorite camel and companion are also placed in the bronze time capsule. 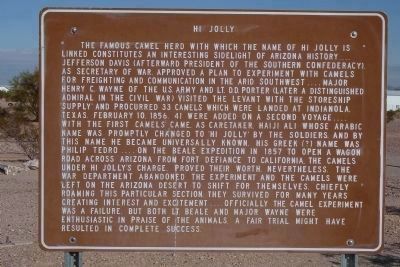 Photographed By Thomas Chris English, December 11, 2009
5. Historical Background Sign
Hi Jolly
The famous camel herd with which the name of Hi Jolly is linked constitutes an interesting sidelight of Arizona history….
Jefferson Davis (afterward President of the Southern Confederacy). As Secretary of War. Approved a plan to experiment with camels for freighting and communication in the arid Southwest….Major Henry C. Wayne of the U.S. Army and Lt. D.D. Porter (later a distinguished admiral in the Civil War) visited the Levant with the storeship “Supply” and procurred 33 camels which were landed at Indianola, Texas. February 10, 1856. 41 were added on a second voyage….
With the first camels came. As caretaker, Haiji Ali whose Arabic name was promptly changed to “Hi Jolly” by the soldiers. And by this name he became universally known. His Greek (?) name was Philip Tedro….On the Beale Expedition in 1857 to open a wagon road across Arizona from Fort Defiance to California. The camels under Hi Jolly’s charge. Proved their worth. Nevertheless, the War Department abandoned the experiment and the camels were left on the Arizona desert to shift for themselves. Chiefly roaming this particular section. They survived for many years creating interest and excitement …. Officially the camel experiment was a failure. But both Lt. Beale and Major Wayne were enthusiastic in praise of the animals. A fair trail might have resulted in a complete success. 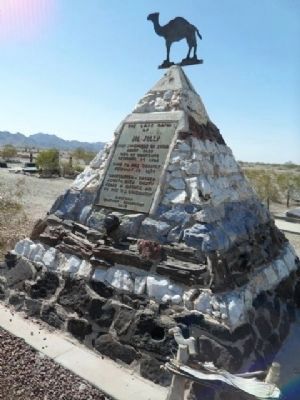 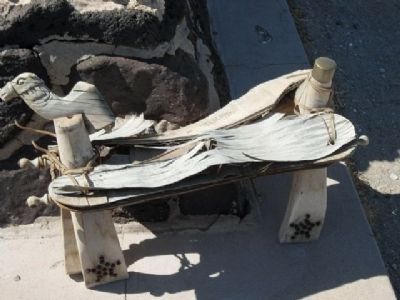