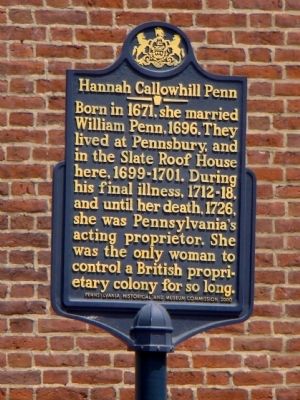 Photographed By J. J. Prats, May 14, 2010
1. Hannah Callowhill Penn Marker
Inscription.
Hannah Callowhill Penn. . Born in 1671, she married William Penn, 1696. They lived at Pennsbury, and in the Slate Roof House here, 1699–1701. During his final illness, 1712–18, and until her death, 1726, she was Pennsylvania’s acting proprietor. She was the only woman to control a British proprietary colony for so long. . This historical marker was erected in 2000 by Pennsylvania Historical and Museum Commission. It is in Philadelphia in Philadelphia County Pennsylvania

Topics and series. This historical marker is listed in these topic lists: Colonial Era • Women. In addition, it is included in the Pennsylvania Historical and Museum Commission series list. A significant historical year for this entry is 1671. 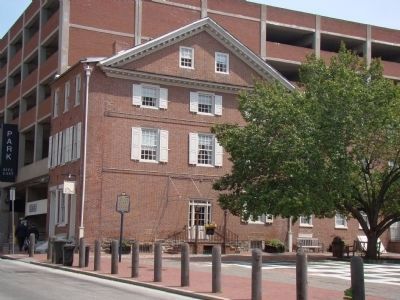 Photographed By J. J. Prats, May 14, 2010
2. Marker and the Thomas Bond House
Welcome Park, the plaza on the right, is where the Slate Roof House stood.

Also see . . .
1. Hannah Callowhill Penn - Wikipedia entry. “Hannah Callowhill Penn (11 February 1671 – 20 December 1726) was the second wife of Pennsylvania founder William Penn; she effectively administered the Province of Pennsylvania for six years after her husband suffered a series of strokes and then for another eight years after her husband’s death. She served as acting proprietor from 1712 until her death in 1726.

Miss Callowhill was born in Bristol, England, the daughter of Thomas Callowhill, a merchant there. A Quaker, she married William Penn March 5, 1696 when she was 24 and he was 52. She was pregnant with their first of eight children when the couple embarked from England for their three-month voyage to America in 1699. She lived in great style, both in Philadelphia and in Pennsbury Manor, 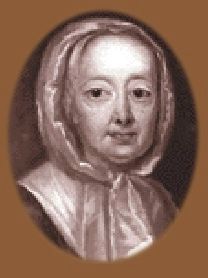 Wikimedia Commons Collection
3. Hannah Callowhill Penn (1671–1726)
Wife of William Penn; acting proprietor of the Pennsylvania Colony, 1712–1726.
a beautiful estate located in Bucks County, on the Delaware River. When William Penn died at age 73 on July 30, 1718 his will gave full control of the colony and his fortune to Hannah Penn. William Penn’s oldest son by his first marriage, William Penn, Jr., sought to set aside his father’s will to obtain control of the colony. His suit was unsuccessful and Hannah Penn remained in charge until she died from a stroke at age 55. Her deputy in Pennsylvania from 1718 till 1727 was Sir William Keith.” (Submitted on June 27, 2010, by J. J. Prats of Powell, Ohio.)

2. Hannah Callowhill Penn - Behind the Marker. ExplorePAHistory.com (Submitted on July 21, 2011, by Mike Wintermantel of Pittsburgh, Pennsylvania.) 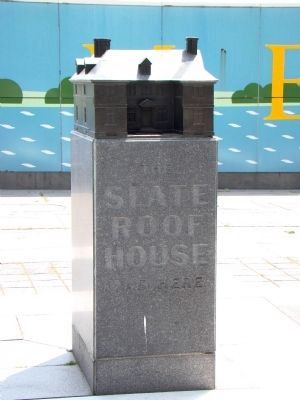 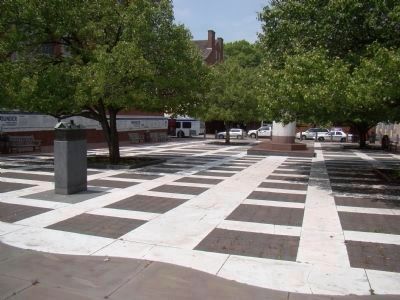 Photographed By J. J. Prats, May 14, 2010
5. Welcome Park
The model of the Slate Roof House is on the stone pedestal on the left. 2nd Street is in the distance. The statue of William Penn is on the white pedestal in the center of the park, obscured by the tree. 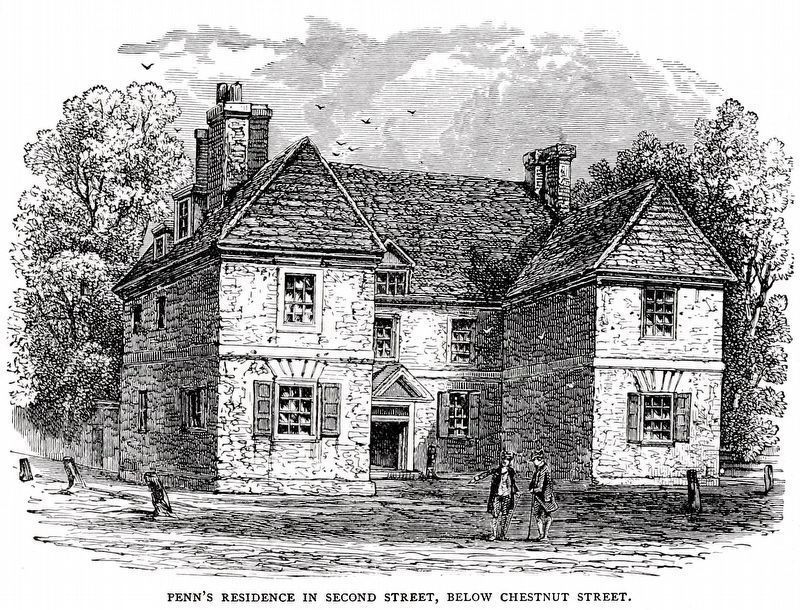