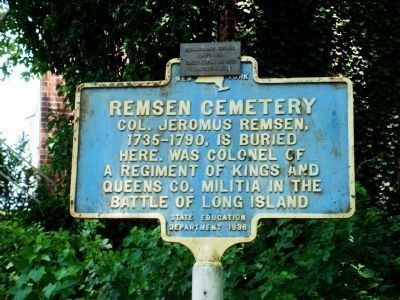 Photographed By Christian Belena, June 26, 2010
1. Remsen Cemetery Marker
Inscription.
Remsen Cemetery. Remsen Family Cemetery. Col. Jeromus Remsen, 1735-1790, is buried here. Was colonel of a regiment of Kings and Queens Co. militia in the Battle of Long Island. . This historical marker was erected in 1938 by State Education Department. It is in Woodhaven in Queens County New York

Col. Jeromus Remsen, 1735-1790, is buried here. Was colonel of a regiment of Kings and Queens Co. militia in the Battle of Long Island.

More about this marker. The Remsen family owned a substantial lot surrounding this cemetery which was eventually sold off and subdivided. This small plot of land is all that exists of the Remsen property. Another marker located underneath the main one states: "Within this park lies the remains of Revolutionary War veteran Colonel Jeromus Remsen. Buried in the confines of this site were his cousins Major Abraham Remsen, Captain Luke Remsen, Lieutenant Aurt Remsen and their families. The Remsen family were amongst the first settlers of this area originally known as 'White Pot.'" 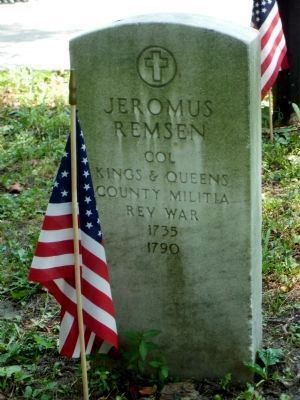 Editor’s want-list for this marker. Photo of plaque marker that is at foot of Remsen Cemetery marker. • Can you help?
Share this page.