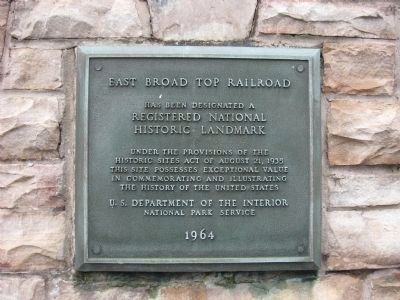 East Broad Top Railroad
Has Been Designated A
Registered National
Historic Landmark
Under the Provisions of The
Historic Sites Act of August 21, 1935
This Site Possesses Exceptional Value
In Commemorating and Illustrating
The History of the United States
U.S. Department of the Interior
National Park Service
1964

Erected 1964 by U.S. Department of the Interior National Park Service.

Topics and series. This historical marker is listed in these topic lists: Industry & Commerce • Landmarks • Man-Made Features • Notable Buildings • Railroads & Streetcars. In addition, it is included in the National Historic Landmarks series list. A significant historical year for this entry is 1935.

Location. 40° 14.465′ N, 77° 53.952′ W. Marker is in Rockhill Furnace, Pennsylvania, in Huntingdon County. Marker is at the intersection of Meadow Street (Route 994) and Iron Street, on the right when traveling east on Meadow Street. The marker is across the 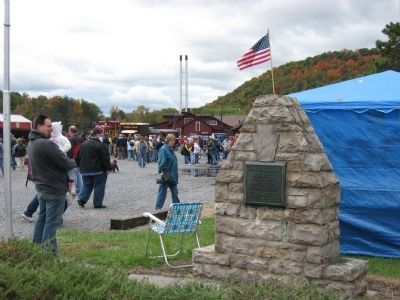 Click or scan to see
this page online
street from the East Broad Top Railroad Station. Touch for map. Marker is in this post office area: Rockhill Furnace PA 17249, United States of America. Touch for directions.

Regarding East Broad Top Railroad. The East Broad Top Railroad & Coal Company (EBT) was originally chartered on April 16, 1856 to mine and transport coal from the rich fields of Broad Top Mountain. Due to lack of funding, however, the railroad did not become a reality until fifteen years later when the Rockhill Iron & Coal Company (RIC) was incorporated. The founders, a group of Philadelphia businessmen, bought a controlling interest in EBT stock, and made plans to construct a narrow gauge railway. The line was opened from Mt. Union to Rockhill Furnace on August 30, 1873, and was completed in 1874 to the company town of Robertsdale which was developing around Rockhill No. 1 Mine. In 1891, the tracks were extended to a new mine at Woodvale. 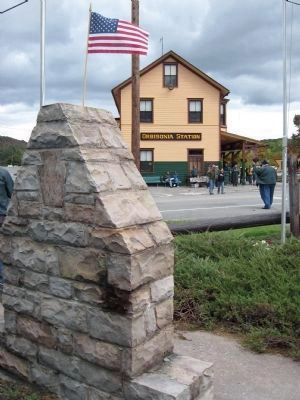 By Howard C. Ohlhous, October 9, 2009
3. East Broad Top Railroad Marker
Designated a National Historic Landmark in 1964, the EBT is the most complete historic narrow guage railroad site in North America. The National Historic Landmark plaque is attached to this stone monument, facing the East Broad Top's Orbisonia Station across the street.
Trains made several daily runs to Mt. Union where coal was transferred to the standard gauge cars of the Pennsylvania Railroad.

At Rockhill, the company built an extensive shops complex and engine house. With its steam-generated and belt-driven machinery, the EBT was almost totally self-sufficient, maintaining its rolling stock and constructing its own freight cars. As the railroad prospered, passenger service was expanded to include public excursions as well as transport of miners. In the early 1900's, the trackage and bridges were substantially rebuilt, including an early concrete arch railway bridge. In 1906 a new passenger station at Rockhill was constructed, which bears the name of the neighboring town of Orbisonia. This building also houses the company offices.

In 1919, the EBT was purchased by Madeira, Hill & Company (MHC). At Mt. Union, MHC established a coal cleaning plant and a "timber transfer." Originally, the timber transfer was used to transfer wood from narrow to standard gauge cars from the McKelvey Brothers Logging Company. After the McKelvey Brothers went out of business in 1933, the timber transfer was used to change the trucks under standard gauge cars to move on the EBT rails until abandonment. In 1938, after MHC's bankruptcy, bondholders reorganized the company as the Rockhill Coal Company. After World War II, rising labor costs, crippling 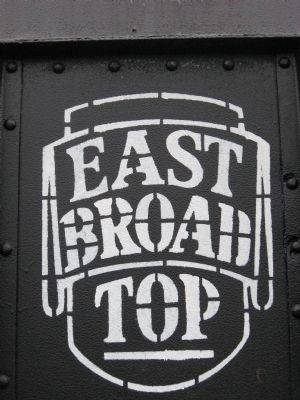 By Howard C. Ohlhous, October 9, 2009
4. East Broad Top Railroad Logo
strikes, diminishing coal deposits and a decreasing market took their toll on the EBT. Finally, in April 1956, the last run was made to Mt. Union and the EBT became the last operating narrow gauge east of the Rocky Mountains.

Soon after closing in 1956, the Kovalchick Salvage Company of Indiana, PA, a large railroad scrapper, bought the railroad and all its assets. In 1960, passenger service was restored to celebrate the bicentennials of Orbisonia and Rockhill. The EBT was designated a National Historic Landmark in 1964 and remains the most complete and authentic narrow gauge site in America and the last original narrow gauge east of the Rockies.

The non-profit organization, Friends of the East Broad Top, was incorporated in 1983 to document, preserve, and restore the EBT. In 2002, FEBT volunteers finally began to get their hands dirty with many restoration projects at the East Broad Top.

In 2009 the nonprofit EBT Preservation Association signed a three year contract to operate the trains of the EBT with an option to purchase. 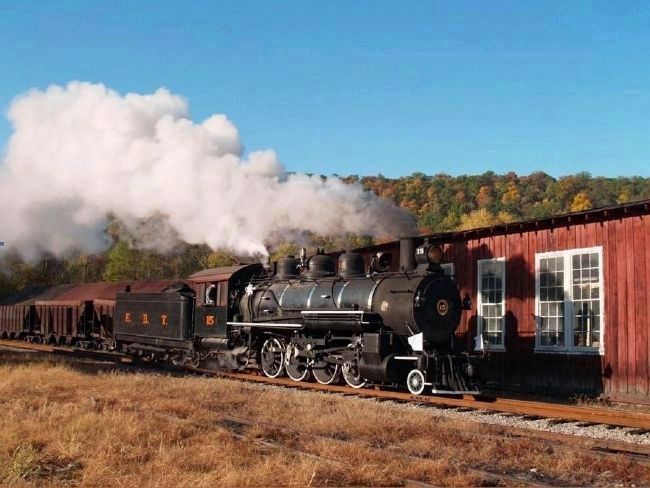 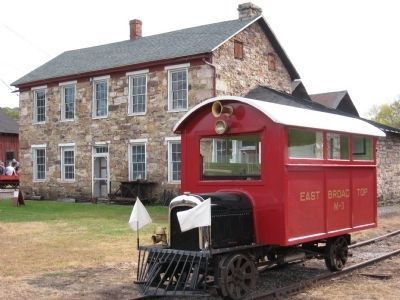 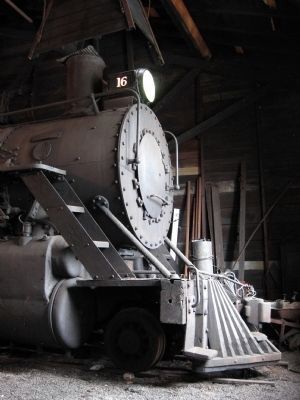 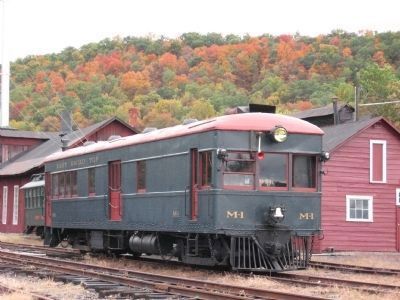 By Howard C. Ohlhous, October 9, 2009
8. East Broad Top Railroad M-1
In 1927 East Broad Top shop employees assembled this motorcar kit fabricated by the J.G. Brill Co. The M-1 has a gas engine and was therefore much cheaper to operate, at about half the cost of a steam engine. 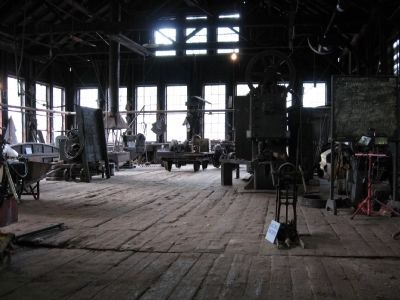 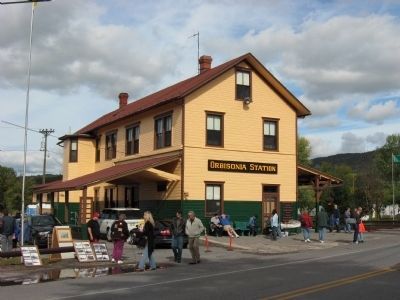 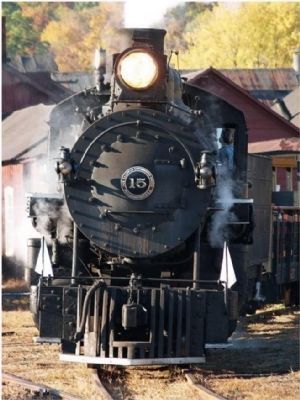 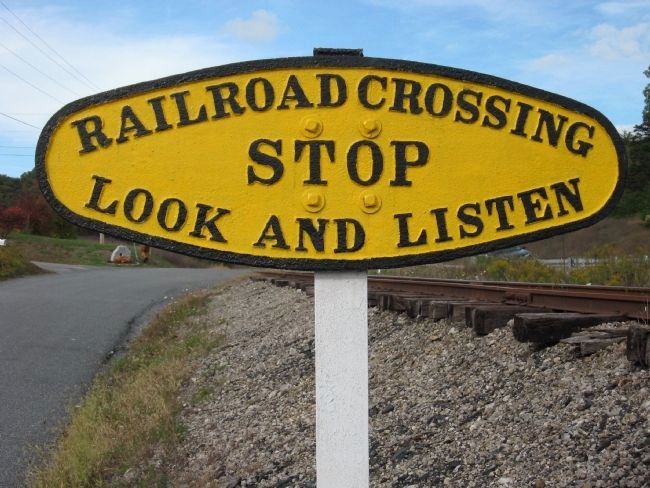