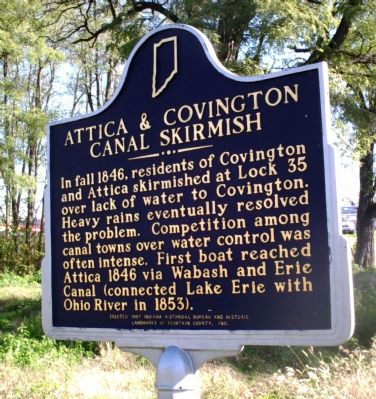 Photographed By Al Wolf, November 3, 2007
1. Attica & Covington Canal Skirmish
With Fall Rains Solving the Problems and the Canal boat traffic, came prosperity helping to heal the "Sore Feelings" between two communities.
Inscription.
Attica and Covington Canal Skirmish. . , In fall 1846, residents of Covington and Attica skirmished at Lock 35 over lack of water to Covington. Heavy rains eventually resolved the problem. Competition among canal towns over water control was often intense. First boat reached Attica 1846 via Wabash and Erie Canal (connected Lake Erie with Ohio River in 1853). . This historical marker was erected in 1997 by Indiana Historical Bureau and Historic Landmarks of Fountain County, Ind.. It is in Attica in Fountain County Indiana

In fall 1846, residents of Covington and Attica skirmished at Lock 35 over lack of water to Covington. Heavy rains eventually resolved the problem. Competition among canal towns over water control was often intense. First boat reached Attica 1846 via Wabash and Erie Canal (connected Lake Erie with Ohio River in 1853).

Topics and series. This historical marker is listed in these topic lists: Industry & Commerce • Natural Resources • Settlements & Settlers • Waterways & Vessels. In addition, it is included in the Indiana Historical Bureau Markers, and the Wabash & Erie Canal series lists. A significant historical year for this entry is 1846.

Location. 40° 17.531′ N, 87° 15.12′ W. Marker is in Attica, Indiana, in Fountain County. Marker is on West Washington Street, on the right when traveling west. About one block from entrance of Ouibache Park at Wabash River front. Touch for map. Marker is at 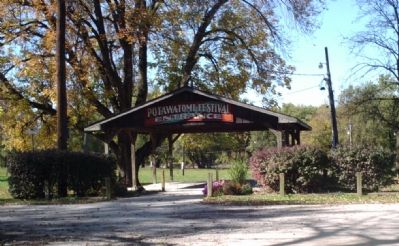 Click or scan to see
this page online
or near this postal address: 200 W Washington St, Attica IN 47918, United States of America. Touch for directions.

Regarding Attica & Covington Canal Skirmish. Sixteen years after Indiana became a State the Wabash & Erie Canal broke ground on Feb. 22, 1832 at Ft. Wayne, Ind. (population 300). It reached Fountain County by 1846 and was completed (at Evansville, IN) by 1853. The full route of the Wabash and Erie Canal measured 468 miles long, making it the longest artificial water way in the United States, and second longest in the world, surpassed only by “The Grand Canal” in China.

The “big drought” of the summer of 1846 brought on the “Attica-Covington War.” When water was diverted from the Wabash River, there was barely enough to fill the canal as far as Attica—and not enough for the Covington section. The Attica Journal newspaper 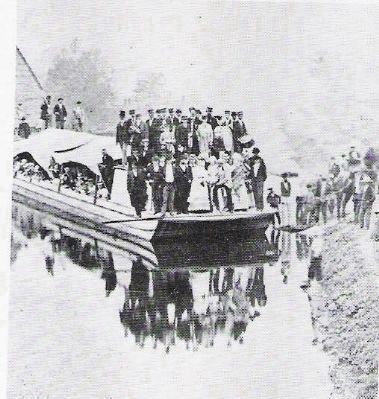 circa 1872
3. Wedding Party on the Canal Boat !
At Attica, Indiana - about 1872 after the entire wedding party of Louise Kupp and Ed Lippoid board the canal "packet boat" they begin the reception and the celebration. Music is played by local band.
printed an exaggerated description of “boats arriving at Attica."” The Covington area people became inflamed, with red hot tempers suspecting the worst.

United States Senator Edward A Hannegan happened to be home in Covington (from Washington, D.C.). He attempted to convince the Attica citizens to open the flood gates, but they refused. By daylight, the Honorable Senator and 300 Covington townspeople with clubs stormed up “River Road.” Attica residents responded too late with too few, and the flood gates were forced open. There was not enough water! In a matter of minutes 30 canal boats laid on their side, mired in mud.

Reason finally prevailed as all now saw the need to wait for fall rains. For the next few years, both towns flourished from the traffic between Lake Erie and the Mouth of the Mississippi via the Ohio River. In the end, the canal was too expensive to maintain, and when less costly railroads were completed nearby, its use declined dramatically. By 1860, portions south of Terre Haute were closed and the process of decline continued northward. In 1876, the entire canal in Indiana was sold at auction.

Also see . . .
1. "The men who dug the Canal". A light and lively song with many old photos of canal builders in the process of digging a canal. (Submitted on July 8, 2009, by Al Wolf of Veedersburg, Indiana.)

2. "Angel of the Canal" ::. Many fell ill digging canals. In frontier days there were few doctors and medicine was scarce. In the Brecksville, Ohio area Mrs. Johnson became known as the "Angel of the Canal" for her care of the ill. (Submitted on July 11, 2009, by Al Wolf of Veedersburg, Indiana.)