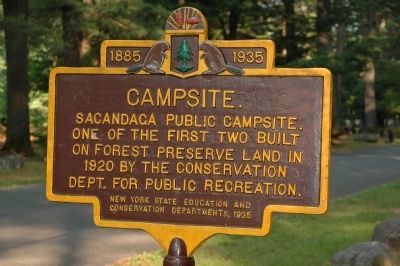 1885 - 1935
Campsite.
Sacandaga Public Campsite.
One of the First Two Built
On Forest Preserve Land In
1920 by the Conservation
Dept. For Public Recreation.

Topics and series. This historical marker is listed in these topic lists: Environment • Government & Politics • Natural Features • Notable Places. In addition, it is included in the Civilian Conservation Corps (CCC) series list. A significant historical year for this entry is 1885.

Location. 43° 21.571′ N, 74° 17.33′ W. Marker is in Wells, New York, in Hamilton County. Marker can be reached from State Highway 30. The marker is not visible from the state highway since it is posted beside the road within the campground. The marker is just beyond and opposite the caretaker's cottage in the campground. Touch for map. Marker is at or near this postal address: 1047 State Highway Route 30, Wells NY 12190, United States of America. Touch for directions.

Other nearby markers. At least 8 other markers are within 11 miles of this marker, measured as the crow flies. Peck's Farm (approx. 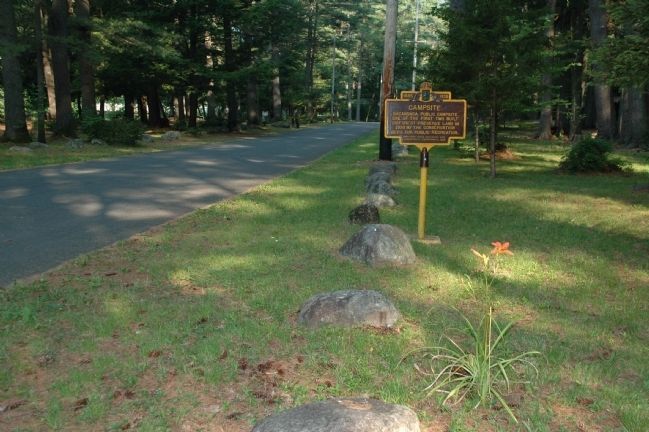 Photographed By Howard C. Ohlhous, July 7, 2010
2. Sacandaga Public Campsite Marker
This roadway through the campground was at one time the site of State Route 30, which has since been relocated.

Regarding Sacandaga Public Campsite. The Devil's Tombstone State campsite in the Catskill Forest Preserve is the other campsite referred to by the text on the marker.

Camping at the Sacandaga Campsite area was well established before development as a campground was begun in 1920. Known locally as "The Forks", it was a popular and well developed stop over camping site when limited traveling conditions required such areas. In 1923 it was considered as being the largest and best equipped of any of the campgrounds available at the time. Much of the campground was developed by the Civilian Conservation Corps during the 1930's, with modernization being made during the years afterward. 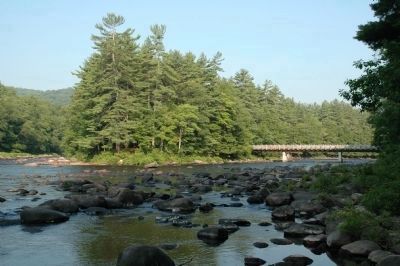 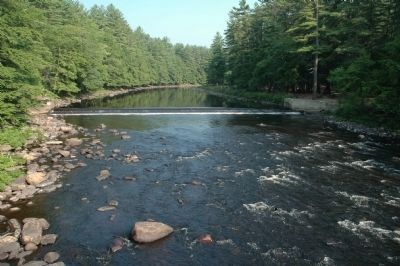 Photographed By Howard C. Ohlhous, July 7, 2010
4. The Sacandaga River
The shallow spillway across the Sacandaga was at one time the site of a wooden dam. 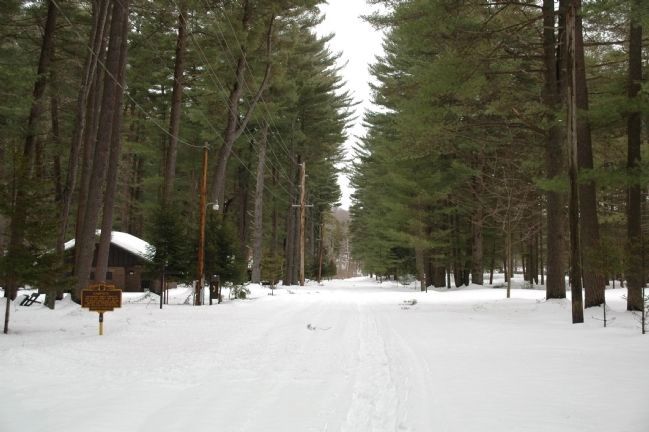