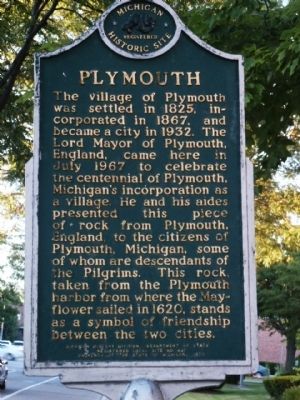 Photographed By Joel S., July 3, 2010
1. Plymouth Marker
Inscription.
Plymouth. . The village of Plymouth was settled in 1825, incorporated in 1867, and became a city in 1932. The Lord Mayor of Plymouth, England, came here in 1967 to celebrate the centennial of Plymouth, Michigan's incorporation as a village. He and his aides presented this piece of rock from Plymouth, England, to the citizens of Plymouth, Michigan, some of whom are descendants of the Pilgrims. This rock, taken from the Plymouth harbor from where the Mayflower sailed in 1620, stands as a symbol of friendship between the two cities. . This historical marker was erected in 1979 by Michigan History Division, Department of State. It is in Plymouth in Wayne County Michigan

Topics and series. This historical marker is listed in these topic lists: Notable Events • Settlements & Settlers. In addition, it is included in the Michigan Historical Commission series list. A significant historical year for this entry is 1825. 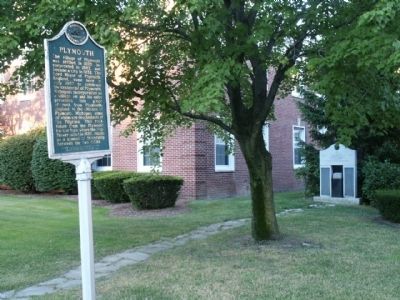 Click or scan to see
this page online
. Marker is in this post office area: Plymouth MI 48170, United States of America. Touch for directions. 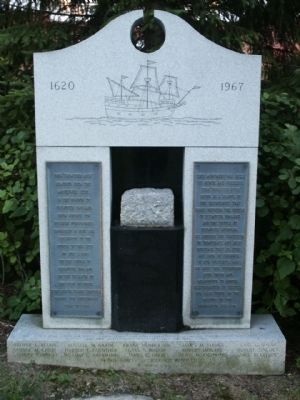 Photographed By Joel S., July 3, 2010
3. Plymouth Rock monument
This "Plymouth Rock" removed from the Mayflower steps in the harbor of Plymouth England from whence our pilgrim forefathers embarked in 1620, was presented to the people of this city on July 7, 1967, by the people of Plymouth, England, on the occasion of the visit of their Lord Mayor Frank Chapman during our Centennial Year of 1967.
This monument was built to honor and preserve this "Plymouth Rock," given as a symbol of the friendships that exist between the people of Plymouth, England and the people of Plymouth, Michigan. We observe the tradition of democracy and ??? heritage that is ours and seek to preserve it for posterity. May we keep this friendship ever fresh and meaningful by annual reaffirmation of respect for each other on the holiday of our separation, July 4th.
Credits. This page was last revised on July 5, 2021. It was originally submitted on July 15, 2010, by Joel Seewald of Madison Heights, Michigan. This page has been viewed 787 times since then and 49 times this year. Photos:   1, 2, 3. submitted on July 15, 2010, by Joel Seewald of Madison Heights, Michigan. • Bill Pfingsten was the editor who published this page.
Share this page.