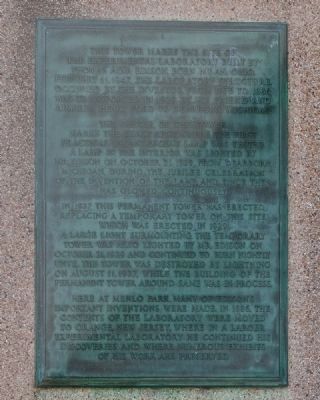 Plaque 1:
This tower marks the site of the experimental laboratory built by Thomas Alva Edison, born Milan, Ohio, February 11, 1847. The laboratory structure occupied by the inventor from 1876 to 1886, was transported in 1929 by his friend and admirer Henry Ford to Dearborn, Michigan.

The center of this tower marks the exact spot where the first practical incandescent lamp was tested. A lamp in the interior was lighted by Mr. Edison on October 21, 1929 from Dearborn Michigan during the jubilee celebration of the invention of the lamp and since then has glowed continuously.

Here at Menlo Park, many of Edison's important inventions were made. In 1886, the contents of the laboratory were moved to Orange, New Jersey, where in a larger experimental laboratory he continued his discoveries and 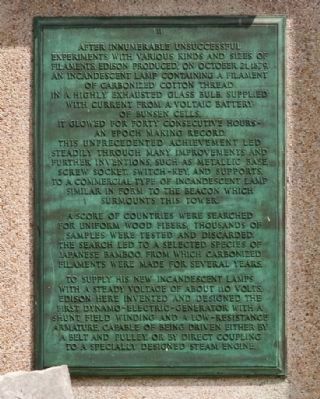 Click or scan to see
this page online
where numerous exhibits of his work are preserved.

Plaque 2:
After innumerable unsuccessful experiments with various kinds and sizes of filaments, Edison produced, on October 21, 1879, and incandescent lamp containing a filament of carbonized cotton thread in a highly exhausted glass bulb supplied with current from a voltaic battery of Bunsen cells.

It glowed for forty consecutive hours - an epoch making record. This unprecedented achievement led steadily through many improvements and further inventions such as metallic base screw socket, switch-key, and supports to a commercial type of incandescent lamp similar in form to the beacon which surmounts this tower.

A score of countries were searched for uniform wood fibers, thousands of samples were tested and discarded. The search led to a selected species of Japanese Bamboo from which carbonized filaments were made for several years.

To supply his new incandescent lamps with a steady voltage of about 100 volts, Edison here invented and designed the first Dynamo-Electric Generator with a Shunt Field Winding and a Low-Resistance Armature, capable of being driven either by a belt and pulley, or by direct coupling to a specially designed steam engine.

Plaque 3:
The efficiency of these new generators was approximately ninety per cent which was about double what had previously been obtained or was supposed possible. 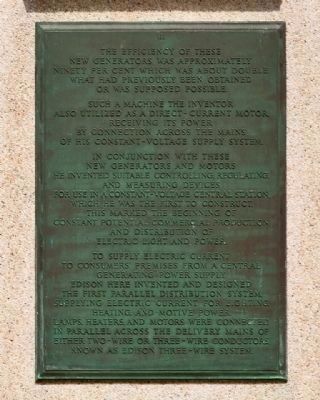 Photographed By R. C., July 17, 2010
3. Thomas Alva Edison Memorial Tower Marker Plaque III
a machine the inventor also utilized as a direct-current motor, receiving its power by connection across the mains of his constant-voltage supply system.

In conjunction with these new generators and motors he invented suitable controlling, regulating, and measuring devices for use in a constant-voltage central station which he was the first to construct. This marked the beginning of constant potential commercial production and distribution of electric light and power.

To supply electric current to consumers premises from a central generating power supply Edison here invented and designed the first parallel distribution system supplying electric current for lighting heating, and motive power. Lamps, heaters, and motors were connected in parallel across the delivery mains of either two-wire or three-wire conductors known as Edison Three-Wire System.

To facilitate the use and control of electric light and power inside of buildings he here invented and designed switches, meters, fuses, branch blocks, outlets, etc. 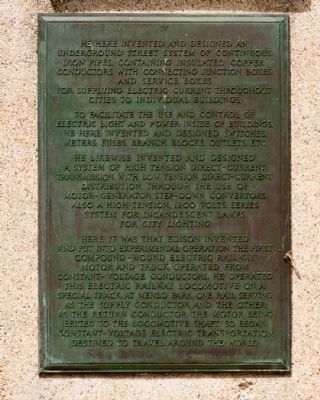 Here it was that Edison invented and put into experimental operation the first compound-wound electric railway motor and truck, operated from constant-voltage conductors. He operated this electric railway locomotive on a special track at Menlo Park. One rail serving as the return conductor, the motor being belted to the locomotive shaft. So began constant-voltage electric transportation, destined to travel around the world.

He invented wireless communication with moving trains, wireless telegraphy using both directional and non-directional antennae with high frequency current supply to both ship and shore stations. The basic principle of thermionic emission in vacuum tubes, known as the Edison 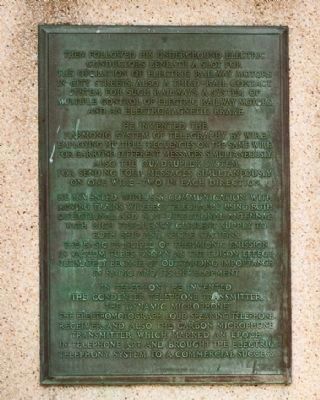 Plaque 6:
Edison here invented the phonograph. A marvelous achievement for recreation and business. For the first time in history sounds and human speech were imperishably recorded.

Edison originated innumerable other inventions. He received recognitions, medals, and honors from governments, national expositions, and organizations in countries all over the world.

When presenting to Edison, The United States Congressional Medal, October 20, 1928, President Calvin Coolidge said: "Noble, kindly servant of the United States and benefactor of mankind, many you long be spared to continue your work and to inspire those who will carry forward your torch."

Edison continued making inventions until his death at Orange, New Jersey, October 18, 1931, and his burial marked the 52nd anniversary of the making of his first successful carbonized filament lamp.

President Herbert Hoover, on learning of the death of Thomas A Edison, broadcast by radio a nation-wide commemorative address on Edison's great 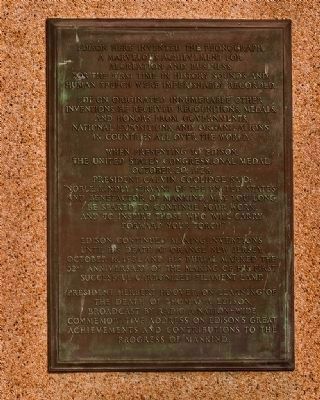 Plaque 7:
"He has led no armies into battle - He has conquered no countries - He has enslaved no people - Yet he wields a power the magnitude of which no warrior has ever dreamed. He commands a devotion more sweeping in scope, more world-wide than any other living man - a devotion rooted deep in human gratitude and untinged by bias of race, color, religion or politics." -- Arthur J. Palmer

The lighting of the tower is a gift of the Public Service Electric and Gas Company of New Jersey - Thomas N McCarter, President. 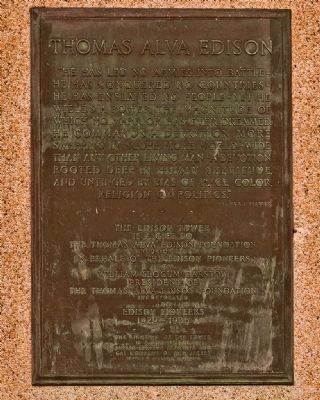 Also see . . .  Menlow Park Museum Official Site. Efforts are underway to save and restore the tower with the "World's Largest Lightbulb." (Submitted on July 28, 2010, by R. C. of Shrewsbury, New Jersey.) 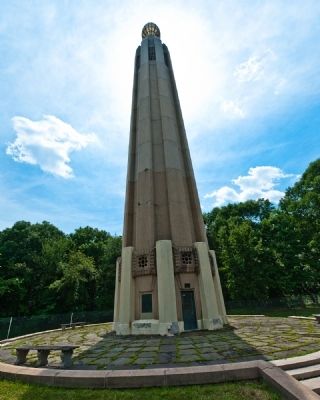 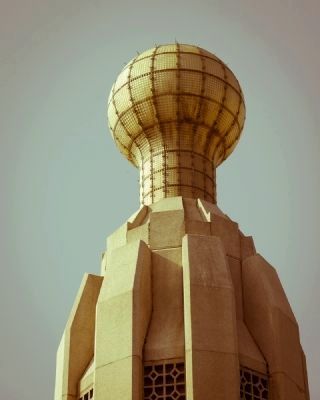 Photographed By R. C., July 18, 2010
9. Large Illuminated Light Bulb On Top of the Edison Memorial Tower
The large bulb atop the Tower was cast by the Corning Glass Works, which fifty-nine years ago,, in 1879 furnished from a sketch the first commercial electric light bulb. The replica bulb contains 153 separate pieces of amber tinted Pyrex glass, 2 in. thick, set upon a steel frame. The bulb is 5 ft. in diameter at the neck and 9 ft. 2 in. in diameter at the greatest width and weighs, without the steel frame on which it is placed, in excess of three tons. Inside this Pyrex glass bulb are four 1000 watt bulbs, four 200 watt bulbs, and four 100 watt bulbs. A duplicate of each is so arranged as automatically to cut in should its companion bulb fail. 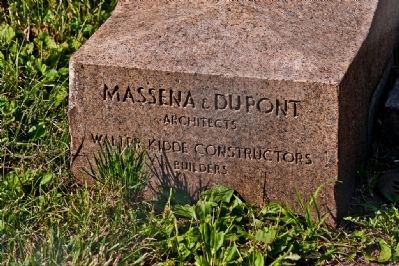 Located at the base of the primary stairs leading up to the platform around the tower. 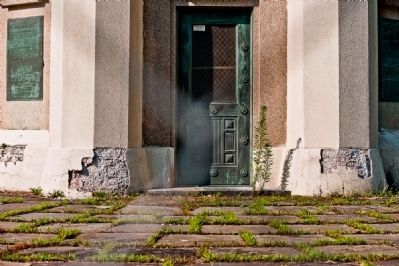 A fence has been erected to keep visitors away from falling cement.

There are plans to restore the tower to its former glory beginning in 2010. 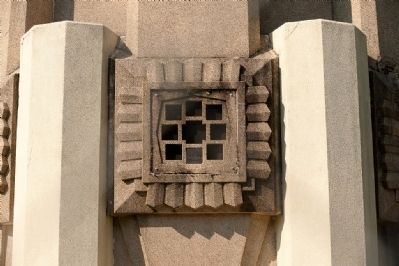 Photographed By R. C.
12. Thomas Alva Edison Memorial Tower Marker
Large loudspeakers behind grates in the tower once broadcast music or organ music that could be heard for miles. 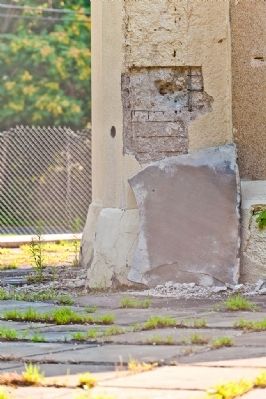 Photographed By R. C.
13. Thomas Alva Edison Memorial Tower Weather Damage
Additional view of damage that time and weather has caused to the tower over the years. 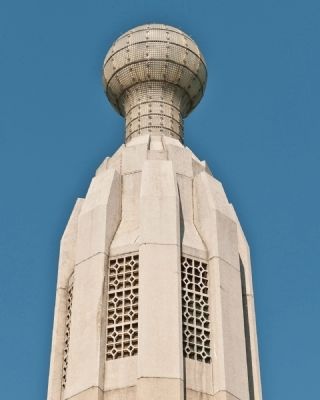 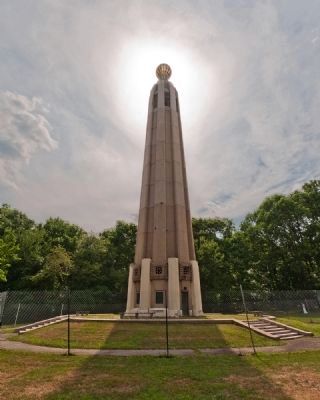 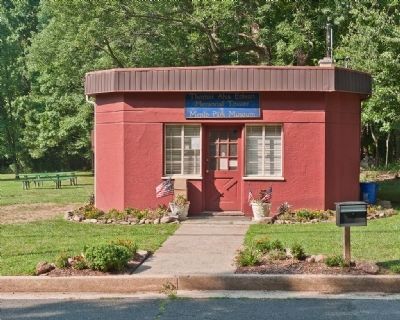 Photographed By R. C.
16. Thomas Alva Edison Memorial Tower & Memorial Museum
There are big plans to improve and renovate the small museum and office next to the tower. 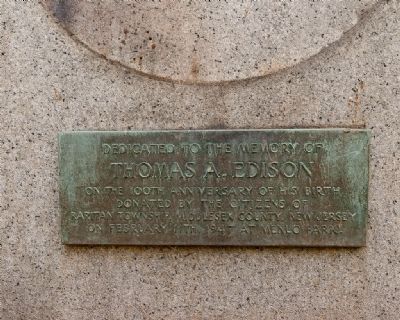 Photographed By R. C.
17. Thomas Alva Edison Memorial Tower Companion Marker
Vandals have stolen a portion of a companion marker to the tower. It is assumed a large crest with Edison's likeness was above the small plaque which reads:

"Dedicated to the memory of Thomas A. Edison on the 100th anniversary of his birth. Donated by the citizens of Raritan Township, Middlesex County, New Jersey on February 11th, 1947 at Menlo Park." 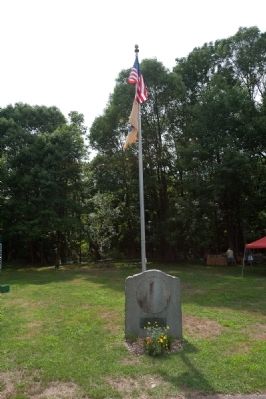 Photographed By R. C., July 17, 2010
18. Vandalized Thomas Alva Edison Companion Marker
It must have taken some effort to pry off the crest that was originally mounted on this marker. 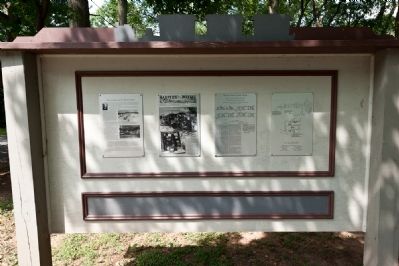 Photographed By R. C., July 17, 2010
19. Static Display with Information About Thomas Edison and His Inventions
Located across the street from the tower and museum office building. 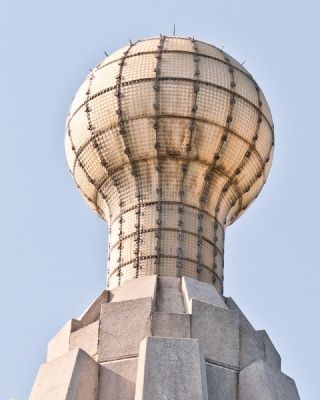 Photographed By R. C., July 18, 2010
20. Thomas Alva Edison Memorial Tower Electric Lamp
Alternate view of the Edison Electric Lamp on top of the tower showing the lightening protection system and some of the effects of weather damage. 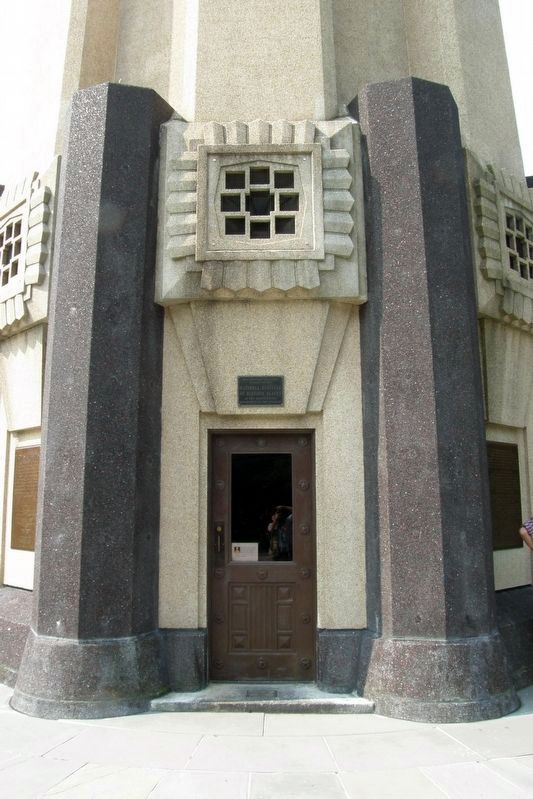 Photographed By Larry Gertner, August 16, 2018
21. Thomas Alva Edison Memorial Tower
By 2018, the tower had been restored and reopened. 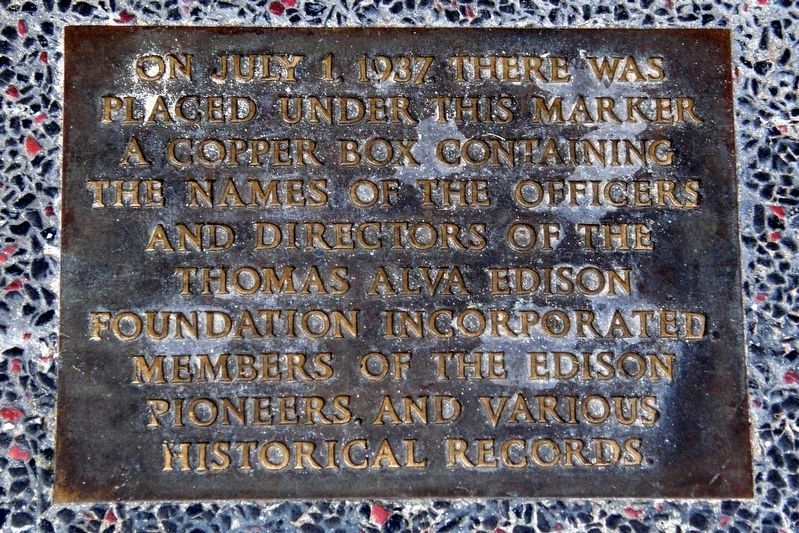 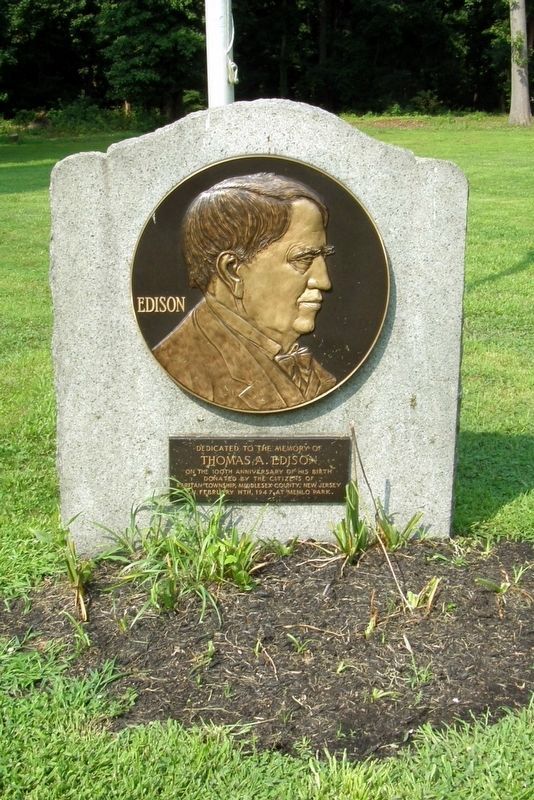 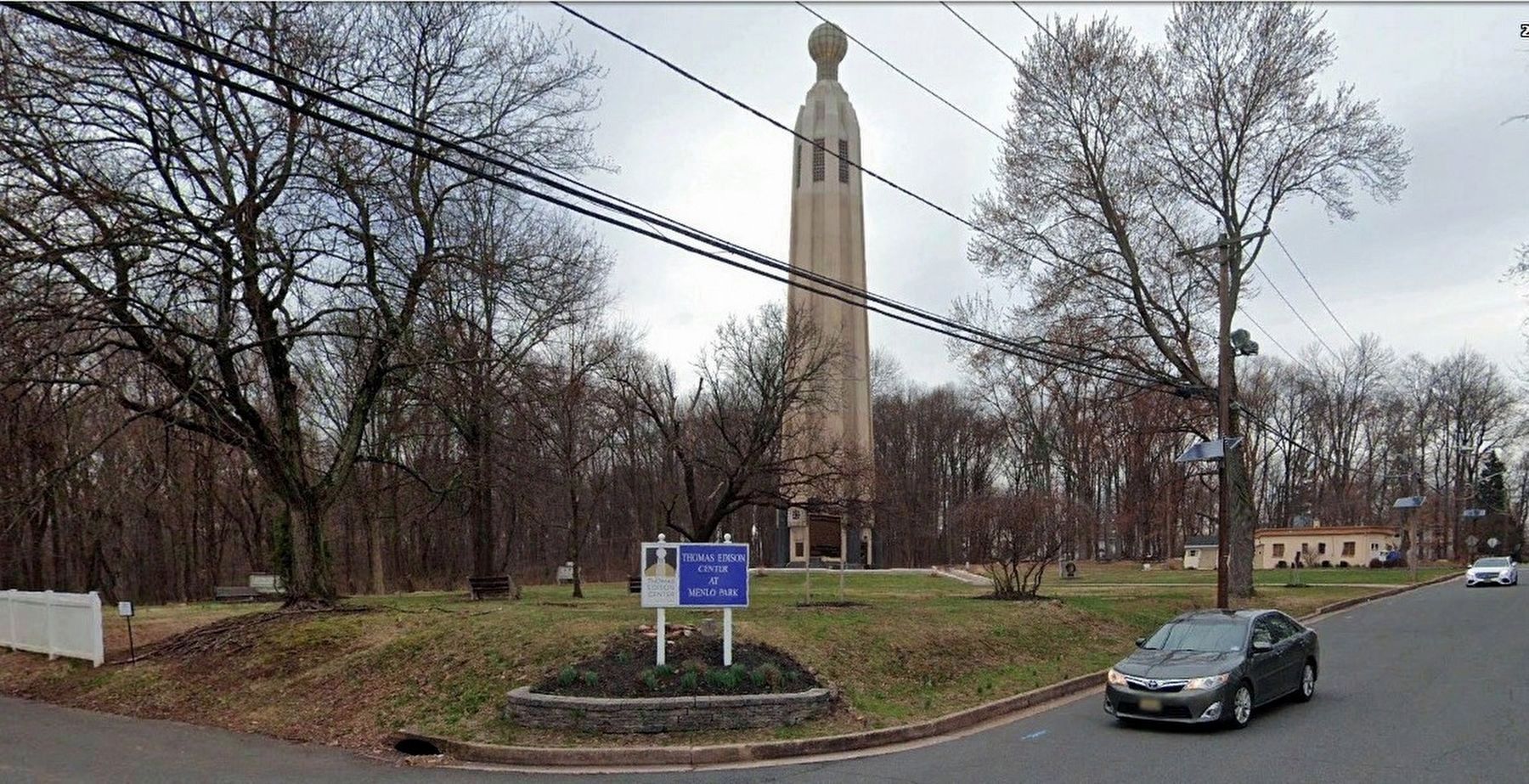