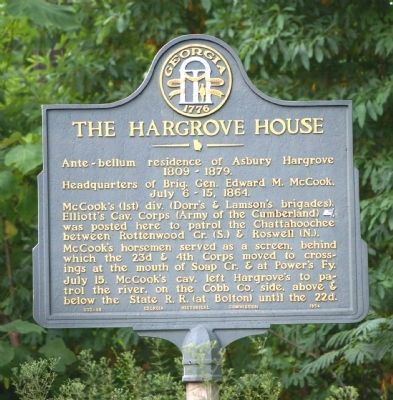 Photographed By David Seibert, July 15, 2010
1. The Hargrove House Marker
Inscription.
The Hargrove House. . Ante-bellum residence of Asbury Hargrove 1809 ~ 1879., Headquarters of Brig. Gen. Edward M. McCook, July 6 ~ 15, 1864., McCook’s (1st) div. (Dorr’s and Lamson’s brigades), Elliott’s Cav. Corps (Army of the Cumberland) [US], was posted here to patrol the Chattahoochee between Rottenwood Cr. (S.) and Roswell (N.). , McCook’s horsemen served as a screen, behind which the 23d and 4th Corps moved to crossings at the mouth of Soap Cr. and at Power’s Fy., July 15. McCook’s cav. left Hargrove’s to patrol the river, on the Cobb Co. side, above and below the State R. R. (at Bolton) until the 22d. . This historical marker was erected in 1954 by Georgia Historical Commission. It is Near Smyrna in Cobb County Georgia

McCook’s horsemen served as a screen, behind which the 23d & 4th Corps moved to crossings at the mouth of Soap Cr. & at Power’s Fy.

Topics and series. This historical marker is listed in this topic list: War, US Civil. In addition, it is included in the Georgia Historical Society series list. A significant historical date for this entry is July 6, 1901. 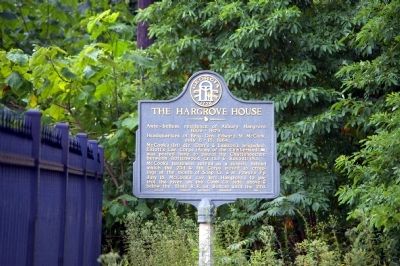 Photographed By David Seibert, July 15, 2010
2. The Hargrove House Marker
The marker, with the cemetery fence on the left

Click or scan to see
this page online
when traveling east. The marker is just inside a heavy fence enclosing the Hargrove Family Cemetery. Touch for map. Marker is in this post office area: Stone Mountain GA 30088, United States of America. Touch for directions. 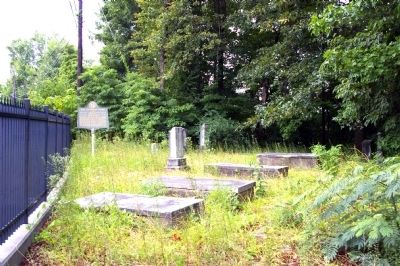 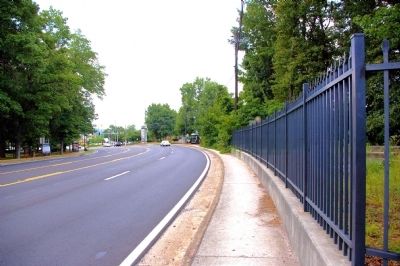