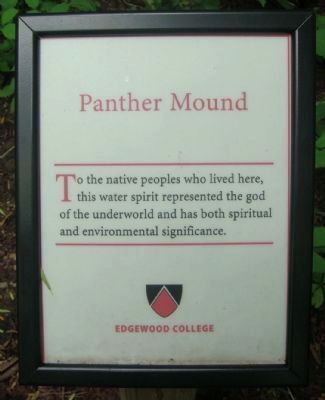 Photographed By Dawn Toman, July 24, 2010
1. Panther Mound Marker
Inscription.
Panther Mound. . To the native peoples who lived here, this water spirit represented the god of the underworld and has both spiritual and environmental significance. . This historical marker was erected by Edgewood College. It is in Madison in Dane County Wisconsin

To the native peoples who lived here, this water spirit represented the god of the underworld and has both spiritual and environmental significance.

Regarding Panther Mound. According to 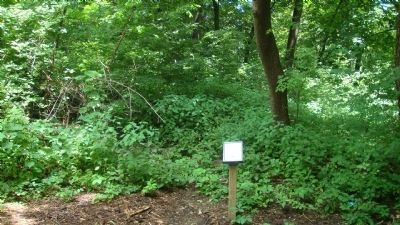 Photographed By Dawn Toman, July 24, 2010
2. Panther Mound Marker
The mound is behind the marker, but it is difficult to discern in the dense underbrush. Moreover, there is a drainage swale passing over the mound that brings debris from the Edgewood College campus.

Click or scan to see
this page online
a 1996 survey by Robert A. Birmingham and Katherine H. Rankin entitled Native American Mounds in Madison and Dane County, "On the grounds of Edgewood College are thirteen mounds overlooking Lake Wingra. One early historical account described Lake Wingra in the summer as a sea of reeds and wild rice. The Winnebago used Lake Wingra as an abundant food source well after Euro-Americans began settling in the area. Along Edgewood Drive, which runs along the lakeshore, are seven conical mounds and the tip of a linear mound along the edge of a drainage swale. Between Edgewood Drive and the library are two remnants of a linear mound. On the other side of the library near Woodrow Street is a large bird effigy. Three conical mounds (of an original group of eight) remain along a path to the north of the Edgewood Campus Grade School playground. Finally, a low mound along the northeast wall of the student services building may be a remnant of one of two bear effigies that once existed on the grounds. Other large mound groups once existed in the Zoo and in the Wingra Park neighborhood to the west. Residential and park development have destroyed all traces."

According to the Madison Landmarks Commission, which designated the mound group, said to date from 700-1200 A.D., as a landmark (no. 104) in 1993, "Wisconsin has the highest concentration of effigy mounds in the United States 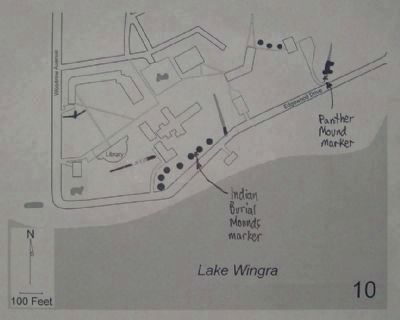 Photographed By Native American Mounds in Madison and Dane County, July 24, 2010
3. Map of Panther Mound Marker Area
Black shading indicates existing mounds and grey shading indicates lost mounds.
and the Madison area has one of the highest concentration of effigy mounds remaining. Most mounds were lost to 19th century agricultural practices and city development. The mound builders were farmers who also engaged in hunting and gathering. They lived in small villages and migrated from one to another based on the seasonal availability of natural resources. The mounds often, but not always, have burials associated with them, but their exact purpose is not entirely understood. Mounds tend to have been built in places with beautiful views of the surrounding countryside. The mounds are considered sacred by modern Native Americans and should be treated with respect." 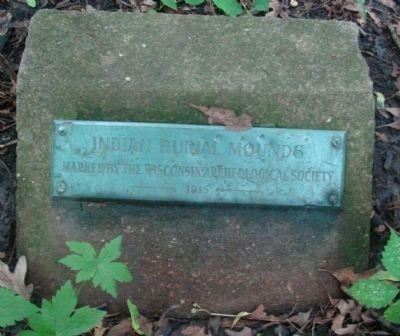 Photographed By William J. Toman
4. Indian Burial Mounds Marker
Two-tenths of a mile southwest of the Panther Mound marker is an earlier (1915) marker placed by the Wisconsin Archeological Society for the mound group. 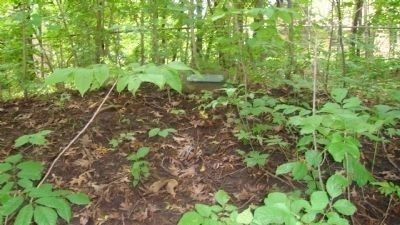 Photographed By William J. Toman
5. Wide View of Indian Burial Mounds Marker
The marker appears to be on top of one of the mounds. 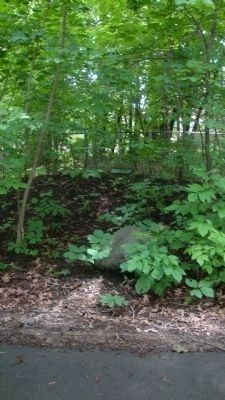 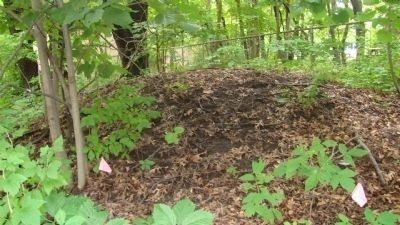