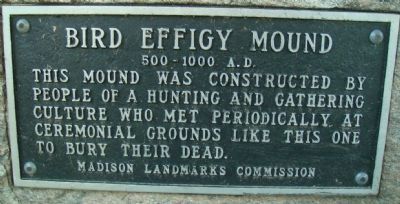 Photographed By William J. Toman, July 2, 2010
1. Bird Effigy Mound Marker
Inscription.
Bird Effigy Mound. 500-1000 A.D.. This mound was constructed by people of a hunting and gathering culture who met periodically at ceremonial grounds like this one to bury their dead. . This historical marker was erected in 1975 by Madison Landmarks Commission. It is in Madison in Dane County Wisconsin

This mound was constructed by people of a hunting and gathering culture who met periodically at ceremonial grounds like this one to bury their dead.

Topics and series. This historical marker is listed in these topic lists: Native Americans • Notable Places. In addition, it is included in the Wisconsin, Madison Landmarks Commission series list.

Location. 43° 6.13′ N, 89° 22.029′ W. Marker is in Madison, Wisconsin, in Dane County. Marker can be reached from Burrows Road, 0.1 miles west of Sherman Avenue, on the left when traveling west. The marker is just south of the shelter at Burrows Park. Touch for map. Marker is in this post office area: Madison WI 53704, United States of America. Touch for directions. 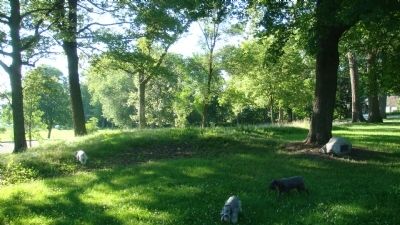 Photographed By William J. Toman, July 2, 2010
2. Bird Effigy Mound Marker
The marker is next to the tree at the right, which is at the "head" of the bird effigy mound.

Click or scan to see
this page online
named Tenney Park (approx. 0.7 miles away); East Side High School (approx. ¾ mile away); Burr Jones Field (approx. 0.8 miles away); Steensland Bridge (approx. 0.9 miles away). Touch for a list and map of all markers in Madison.

Regarding Bird Effigy Mound. According to a 1996 survey by Robert A. Birmingham and Katherine H. Rankin entitled Native American Mounds in Madison and Dane County, "This Late Woodland straight-winged bird effigy mound has a wingspan of about 128 feet. A running fox mound used to exist to the north of the bird. The bird effigy was restored in 1934 by removing tree stumps, repairing mutilations caused by vandals, and restoring sod. The mound is located on a rise just east of the Burrows Park parking lot on Burrows Road off of Sherman Avenue."

According to the Madison Landmarks Commission, it is now believed that the mounds date from 700-1200 A.D., and "The bird, in the religious beliefs of the mound builders, probably symbolized sky spirits; mounds described in the past as 'lizards' may have represented water spirits, and bears and other animals may have represented people and other creatures that lived on the earth's surface. 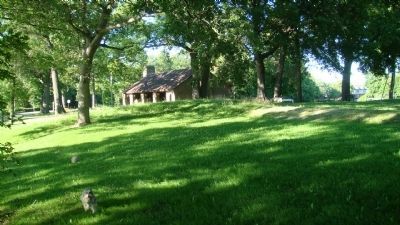 Photographed By William J. Toman, July 2, 2010
3. Bird Effigy Mound
View of the south side of the bird effigy mound, with the "tail" on the left and the "wing" on the right. The park shelter is in the background.
has the highest concentration of effigy mounds in the United States and the Madison area has one of the highest concentration of effigy mounds remaining. Most mounds were lost to 19th century agricultural practices and city development. The mound builders were farmers who also engaged in hunting and gathering. They lived in small villages and migrated from one to another based on the seasonal availability of natural resources. The mounds often, but not always, have burials associated with them, but their exact purpose is not entirely understood. Mounds tend to have been built in places with beautiful views of the surrounding countryside. The mounds are considered sacred by modern Native Americans and should be treated with respect." 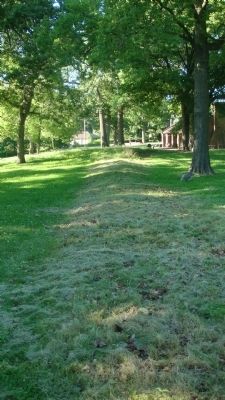 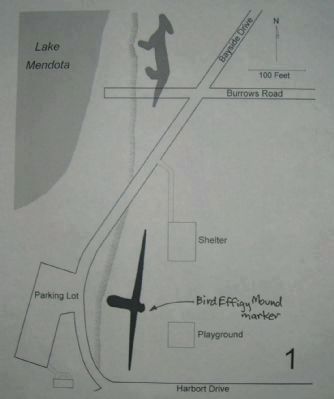