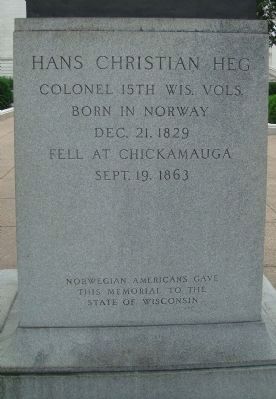 Norwegian Americans
gave this memorial to the
State of Wisconsin 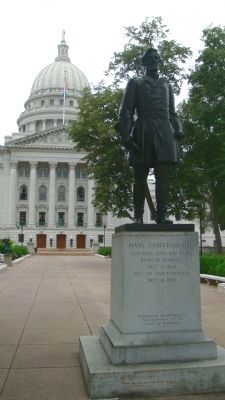 Click or scan to see
this page online
400 feet away); American House (about 400 feet away); Olson and Veerhusen Building / Hobbins Block (about 500 feet away). Touch for a list and map of all markers in Madison.

Regarding Hans Christian Heg. This statue was knocked off its pedestal and thrown into a nearby lake by protesters on the night of June 23, 2020.

Additional commentary.
1. More about the Memorial
According to the Wisconsin Magazine of History, vol. 10, no. 2, p. 228 (December 1926), "Colonel Heg's daughter and Paul Fjelde, the sculptor, were present" at the October 17, 1926 dedication of the statue, "which is of bronze, heroic size, [and] represents the warrior standing with bared head, looking gravely into the distance."

According to the Wisconsin Magazine of History, vol. 9, no. 1, p. 108 (September 1925), "In connection with the Norse-American centennial celebration a replica of the statue to be erected at Madison to Colonel Hans C. Heg was unveiled on June 25 at his birthplace 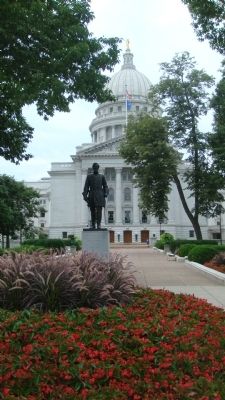