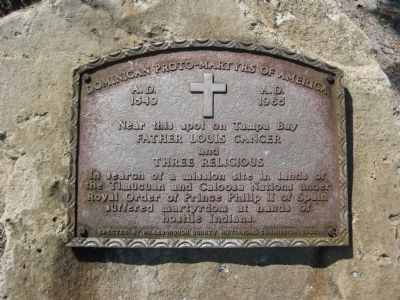 Photographed By AGS Media, July 31, 2010
1. Dominican Proto-Martyrs of America Marker
Inscription.
Dominican Proto-Martyrs of America. A.D. 1549 † A.D. 1965.
Near this spot on Tampa Bay Father Louis Cancer and Three Religious In search of a mission site in lands of the Timucuan and Caloosa Nations under Royal Order of Phillip II of Spain suffered martyrdom at hands of hostile Indians.. . This historical marker was erected in 1985 by Hillsborough County Historical Commission. It is in Tampa in Hillsborough County Florida

Near this spot on Tampa Bay
Father Louis Cancer
and
Three Religious
In search of a mission site in lands of
the Timucuan and Caloosa Nations under
Royal Order of Phillip II of Spain
suffered martyrdom at hands of
hostile Indians.

Location. This marker has been replaced by another marker nearby. It was located near 27° 56.412′ N, 82° 27.605′ W. Marker was in Tampa, Florida, in Hillsborough County. Marker was on Bayshore Boulevard north of Beach Place, on the right when traveling north. The marker is mounted on a large rock set along the sidewalk opposite the seawall balustrade, and is part of the Bayshore Boulevard Linear Park. Touch for map. Marker was in this post office area: Tampa FL 33606, United States of America. Touch for directions.

Other nearby markers. At least 8 other markers are within walking distance of this location. Florida's First Catholic Martyrs (here, next to this marker); 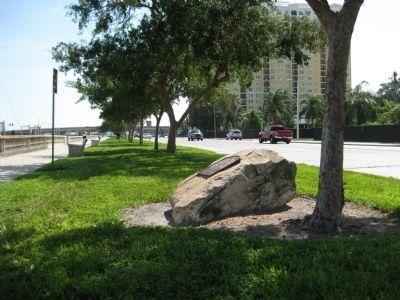 More about this marker. The marker overlooks the Davis Channel and a city marina where the pirate ship José Gasparilla is moored (when not leading the invasion of Tampa during the annual Gasparilla Festival).

The adjacent sidewalk stretches for 4.5 miles and is the longest continuous sidewalk in the world.

Also see . . .  The matyrdom of Fr. Luis Cancer. Fr. Cáncer ministered successfully first in Puerto Rico and then in Guatemala, before turning his sights to Florida, which, according to an early historian, he “always held deep in his heart.” Having secured laborers, provisions, and permission from Spain, Fr. Cáncer set sail from Veracruz, Mexico, accompanied by fellow Dominicans and an interpreter. On the vigil of the Ascension in the year 1549, this expedition sighted land just south of modern-day Tampa Bay (Bahía del Espíritu Santo). Fr. Cáncer celebrated Mass in Florida on the Feast of Corpus Christi. At first the missionaries were welcomed by the native peoples, who knelt in prayer as Fr. Cáncer chanted litanies 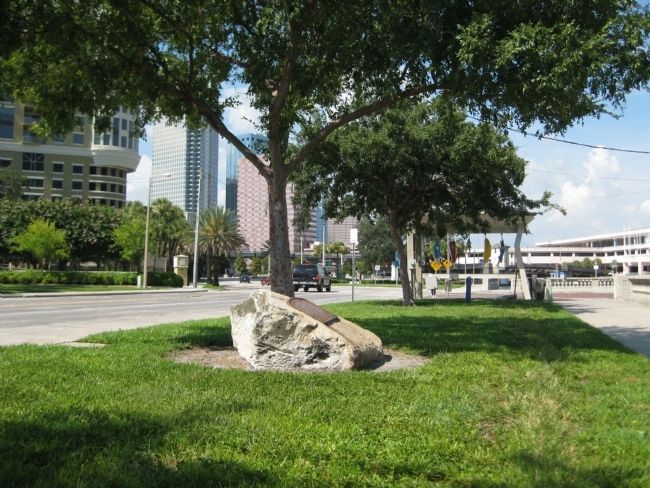 Photographed By AGS Media, July 31, 2010
3. Dominican Proto-Martyrs of America Marker
Looking northeast to downtown Tampa
to God and to the saints. Gifts were exchanged. Fr. Cáncer’s two companions, Fr. Diego de Tolosa and Brother Esteban Fuentes went ashore to stay with the natives, but they were killed on June 20. When Fr. Cáncer, on board a ship near present-day Safety Harbor, heard word of the killings, he resolved to journey to shore. As he made his way toward the woods, toward the natives who were hiding there, he was approached by a man who hugged him and began to lead him away. Then, apparently following a signal, Fr. Cáncer was surrounded by others; he was dragged toward the woods and clubbed to death. (Submitted on August 15, 2017, by J. Makali Bruton of Querétaro, Mexico.) 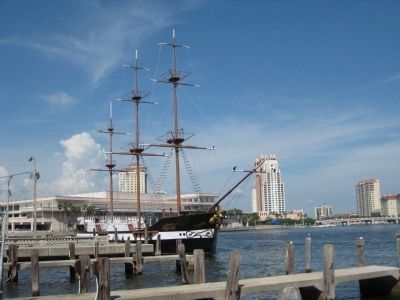