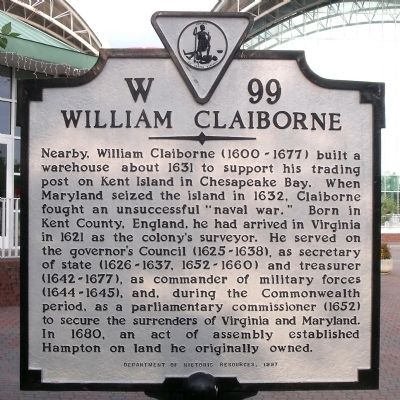 Photographed By Bernard Fisher, July 31, 2010
1. William Claiborne Marker
Inscription.
William Claiborne. . Nearby, William Claiborne (1600-1677) built a warehouse about 1631 to support his trading post on Kent Island in Chesapeake Bay. When Maryland seized the island in 1632, Claiborne fought an unsuccessful "naval war." Born in Kent County, England, he had arrived in Virginia in 1621 as the colony's surveyor. He served on the governor's Council (1625-1638), as secretary of state (1626-1637, 1652-1660) and treasurer (1642-1677), as commander of military forces (1644-1645), and, during the Commonwealth period, as a parliamentary commissioner (1652) to secure the surrenders of Virginia and Maryland. In 1680, an act of assembly established Hampton on land he originally owned. . This historical marker was erected in 1997 by Department of Historic Resources. It is in Hampton Virginia

Topics and series. This historical marker is listed in these topic lists: Colonial Era • Industry & Commerce. In addition, it is included in the Virginia Department of Historic Resources series list. A significant historical year for this entry is 1631. 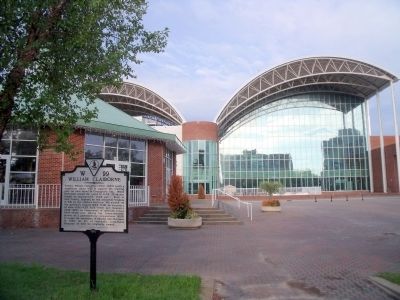 Click or scan to see
this page online
, Virginia. Marker can be reached from the intersection of Settlers Landing Road (U.S. 60) and South King Street. This marker is located in Carousel Park. Touch for map. Marker is in this post office area: Hampton VA 23669, United States of America. Touch for directions.

2. Brief Background on William Claiborne. The National Society of the Claiborne Family Descendants (Submitted on August 1, 2010, by Bernard Fisher of Richmond, Virginia.)

Additional commentary.
1. The Spelling of Claiborne's Name.
“The name is variously spelled Cleburne, Claiborne, Cleyburne, and Clayborne. The last is the spelling of the old records, in Hening and 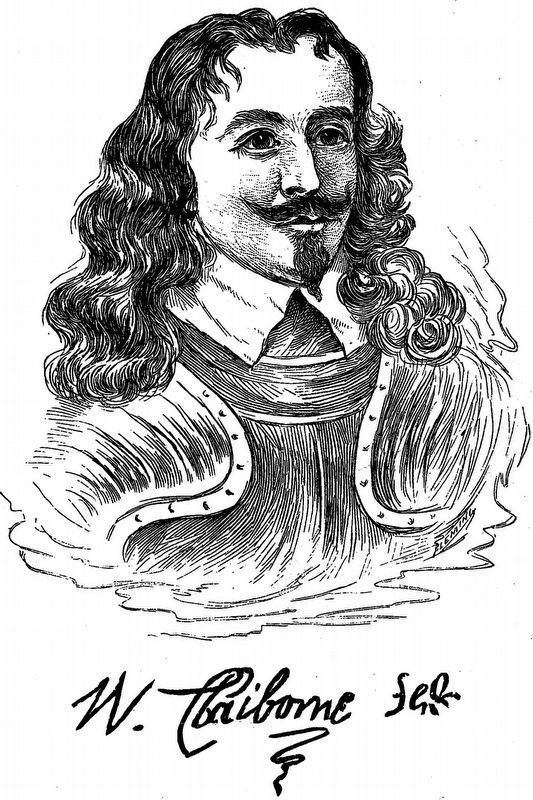