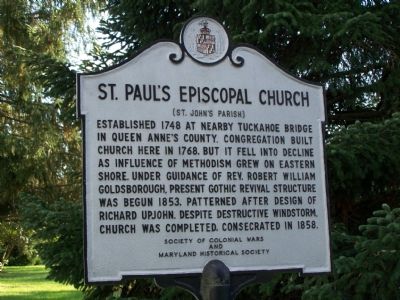 Established 1748 at nearby Tuckahoe Bridge in Queen Anne's County. Congregation built church here in 1768, but it fell into decline as influence of Methodism grew on Eastern Shore. Under guidance of Rev. Robert William Goldsborough, present Gothic revival structure was begun 1853, patterned after design of Richard Upjohn. Despite destructive windstorm, church was completed, consecrated in 1858.

Erected by Society of Colonial Wars and Maryland Historical Society.

Topics. This historical marker is listed in these topic lists: Churches & Religion • Colonial Era. A significant historical year for this entry is 1748.

Other nearby markers. At least 8 other markers are within 6 miles of this marker, measured as the crow flies. Frederick Douglass (approx. 0.2 miles away); Forging Freedom from Places of Bondage (approx. half a mile away); The Beloved Tuckahoe Home of Frederick Douglass 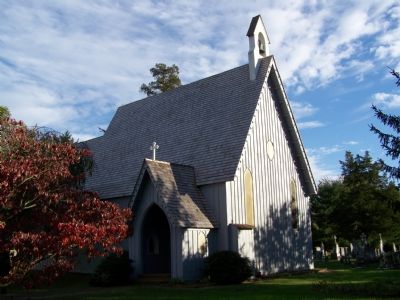