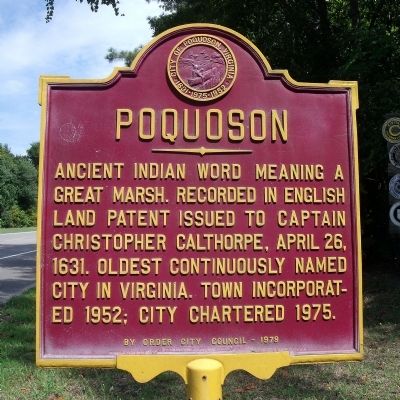 Topics. This historical marker is listed in these topic lists: Colonial Era • Native Americans • Settlements & Settlers. A significant historical date for this entry is April 26, 1636. 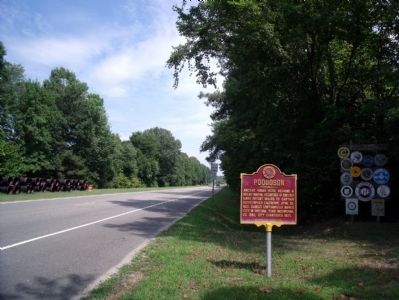 Regarding Poquoson. Formerly part of York County, it became an independent city in 1975, a peer to the county it separated from. Unlike most independent cities in Virginia, some constitutional services such as the courts, sheriff and jail continue to be shared with neighboring York County.

Poquoson is a peninsula jutting into the Chesapeake Bay and the oldest continuously named town in Virginia, where crusty watermen mingle with brainy NASA scientists, and where family histories go back to the 1700s.

Once upon a time, the only way in or out of Poquoson was by boat. Fortunately, the tiny peninsula is now connected to Hampton and Yorktown by two roads, but neither carries traffic to anywhere else. People intent on visiting Poquoson are the only ones who enter this quiet city—and the roughly 12,000 residents like it that way.

... The term "poquoson" was used to describe a boundary line between 2 elevated tracts of land. Such a boundary contained a stream, river, or creek with its adjoining marsh which lay between 2 tracts of higher ground. Poquoson was used as a common noun and is found in many deeds along the eastern seaboard. Through the years the term became a proper noun for the land that lies between 2 such poquosons - the Old Poquoson River and the New Poquoson River.