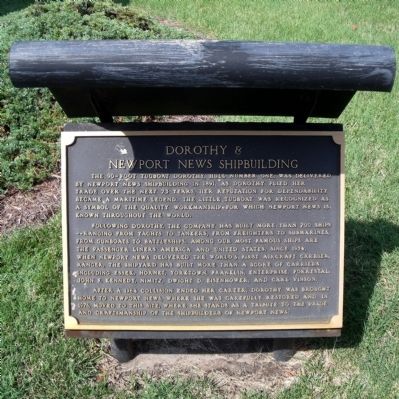 The 90-foot tugboat Dorothy, Hull Number One, was delivered by Newport News Shipbuilding in 1891. As Dorothy plied her trade over the next 73 years, her reputation for dependability became a maritime legend. The little tugboat was recognized as a symbol of the quality workmanship for which Newport News is know throughout the world.

Following Dorothy, the company has built more than 700 ships--ranging from yachts to tankers, from freighters to submarines, from gunboats to battleships, among our most famous ships are the passenger liners America and United States. Since 1934, when Newport News delivered the world’s first aircraft carrier, Ranger, the shipyard has built more than a score of carriers, including Essex, Hornet, Yorktown, Franklin, Enterprise, Forrestal, John F. Kennedy, Nimitz, Dwight D, Eisenhower, and Carl Vinson.

After a 1964 collision ended her career, Dorothy was brought home to Newport News, where she was carefully restored and, in 1976, moved to this site, where she stands as a tribute to the 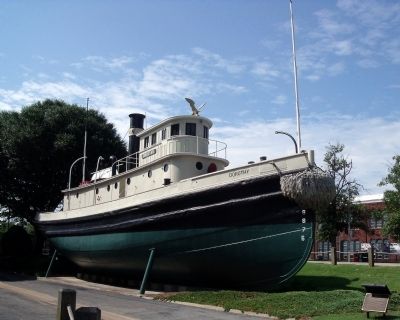 By Bernard Fisher, July 31, 2010
2. Dorothy
pride and craftsmanship of shipbuilders of Newport News.

Location. 36° 59.272′ N, 76° 26.179′ W. Marker is in South Newport News in Newport News, Virginia. Marker can be reached from the intersection of Washington Avenue and 41st Street, on the right when traveling west. Touch for map. Marker is in this post office area: Newport News VA 23607, United States of America. Touch for directions. 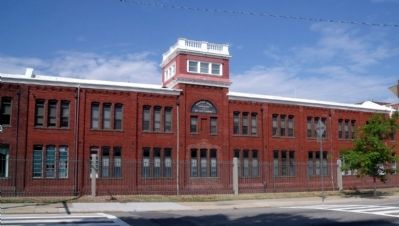