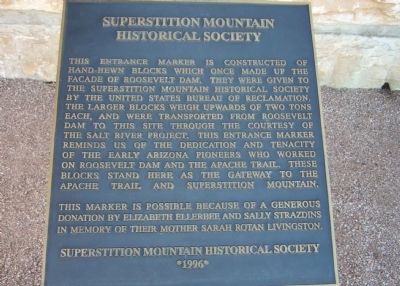 This entrance marker is constructed of hand-hewn blocks which once made up the façade of Roosevelt Dam. They were given to the Superstition Mountain Historical Society by the United States Bureau of Reclamation. The larger blocks weigh upwards of two tons each, and were transported from Roosevelt Dam to this site through the courtesy of the Salt River Project. This entrance marker reminds us of the dedication and tenacity of the early Arizona pioneers who worked on Roosevelt Dam and the Apache Trail. These blocks stand here as the gateway to the Apache Trail and Superstition Mountain.

This marker is possible because of a generous donation by Elizabeth Ellerbee and Sally Strazdins in memory of their mother Sarah Rotan Livingston. 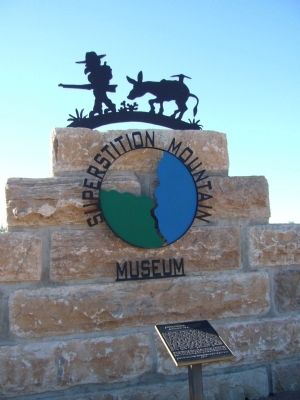 By Bill Kirchner, August 3, 2010
2. Superstition Mountain Historical Society Marker
(Arizona Route 88 at milepost 199), on the right when traveling east. Touch for map. Marker is at or near this postal address: 4087 East Apache Trail, Apache Junction AZ 85119, United States of America. Touch for directions. 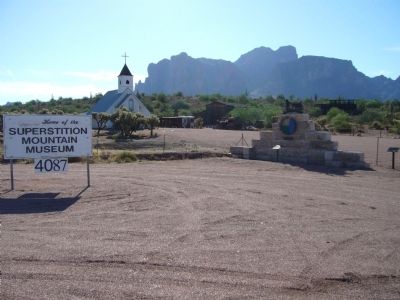