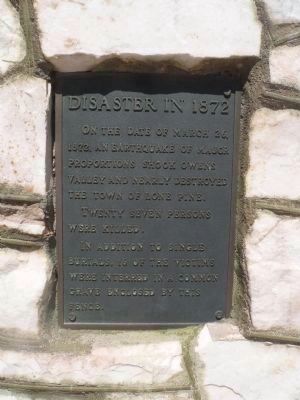 By Beth Ann Thornhill, July 23, 2010
1. Disaster in 1872 Marker
Inscription.
Disaster in 1872. Grave of 1872 Earthquake Victims. On the date of March 26, 1872, an earthquake of major proportions shook Owens Valley and nearly destroyed the town of Lone Pine. . . Twenty seven persons were killed. . . In addition to single burials, 16 of the victims were interred in a common grave enclosed by this fence. . This historical marker is in Lone Pine in Inyo County California

On the date of March 26, 1872, an earthquake of major proportions shook Owens Valley and nearly destroyed the town of Lone Pine.

In addition to single burials, 16 of the victims were interred in a common grave enclosed by this fence. (Marker Number 507.)

Topics and series. This historical marker is listed in these topic lists: Cemeteries & Burial Sites • Disasters. In addition, it is included in the California Historical Landmark series list. 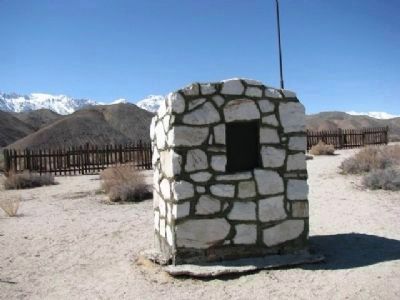 More about this marker. Marker and site are located a short walk up a trail. Once up the hill, you can see the little grave site and marker. Keep walking and you'll see a wooden fence. This is the burial site of the victims.

Regarding Disaster in 1872. This site was designated as California Registered Historical Landmark No.507 on July 31, 1953.

2. Wikipedia Entry. “The earthquake occurred on a Tuesday morning and leveled almost all the buildings in Lone Pine and 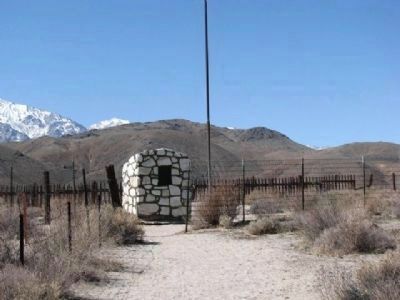 By Denise Boose, February 11, 2012
3. Disaster in 1872 Marker
nearby settlements. Of the estimated 250–300 inhabitants of Lone Pine, 27 are known to have perished and 52 of the 59 houses were destroyed. One report states that the main buildings were thrown down in almost every town in Inyo County. About 130 kilometers (81 mi) south of Lone Pine, at Indian Wells, Kern County, California, adobe houses sustained cracks. Property loss has been estimated at $250,000 (1872 dollars), or about $30,000,000 in 2016 dollars. As in many earthquakes, adobe, stone and masonry structures fared worse than wooden ones which prompted the closing of nearby Camp Independence which was an adobe structure destroyed in the quake.

“The quake was felt strongly as far away as Sacramento, where citizens were startled out of bed and into the streets. Giant rockslides in what is now Yosemite National Park woke naturalist John Muir, then living in Yosemite Valley, who reportedly ran out of his cabin shouting, "A noble earthquake!" and promptly made a moonlit survey of the fresh talus piles. This earthquake stopped clocks and awakened people in San Diego, 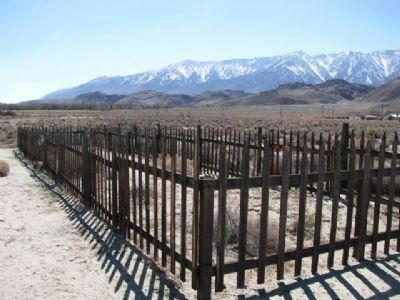 By Denise Boose, February 11, 2012
4. Grave Site
California, to the south, Red Bluff, California, to the north, and Elko, Nevada, to the east. The shock was felt over most of California and much of Nevada. Thousands of aftershocks occurred, some severe.” (Submitted on March 25, 2017.) 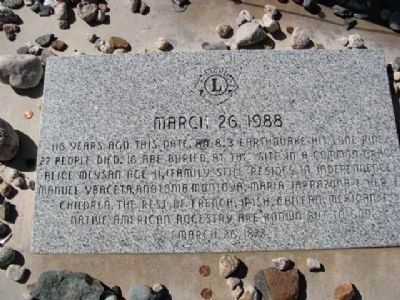 By Denise Boose, February 11, 2012
5. Marker at the base of the flag pole.
March 26, 1988
116 years ago this date, an 8.3 earthquake hit Lone Pine. 27 people died. 16 are buried at this site in a common grave. Alice Meysan Age 11 (family still resides in Independence. Manuel Ybaceta, Anotonia Montoya, Maria Tarrazona & her 3 children. The rest of French, Irish, Chilean, Mexican, Native American ancestry are known but to God.
March 26, 1872 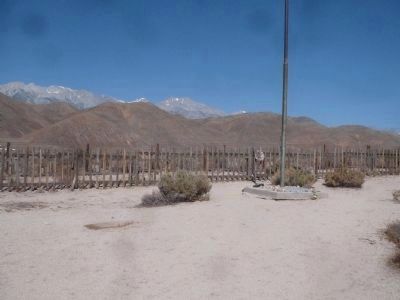 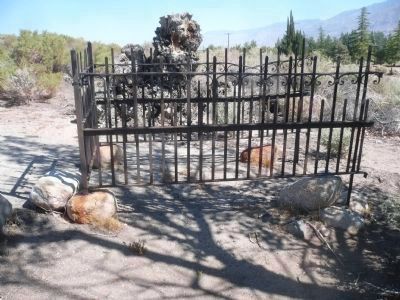 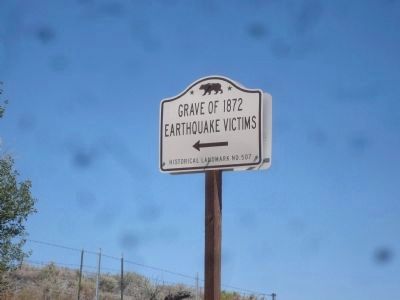