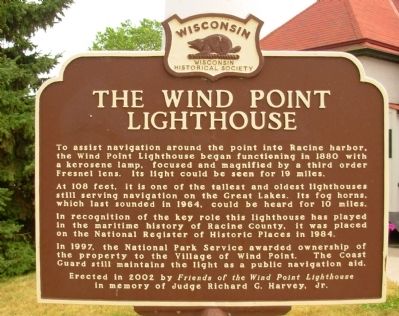 To assist navigation around the point into Racine harbor, the Wind Point Lighthouse began functioning in 1880 with a kerosene lamp, focused and magnified by a third order Fresnel lens. Its light could be seen for 19 miles.

At 108 feet, it is one of the tallest and oldest lighthouses still serving navigation on the Great Lakes. Its fog horns, which last sounded in 1964, could be heard for 10 miles.

In recognition of the key role this lighthouse has played in the maritime history of Racine County, it was placed on the National Register of Historic Places in 1984.

In 1997, the National Park Service awarded ownership of the property to the Village of Wind Point. The Coast Guard still maintains the light as a public navigation aid.

Erected in 2002 by Friends of the Wind Point Lighthouse
in memory of Judge Richard G. Harvey, Jr.

Erected 2002 by Friends of the Wind Point Lighthouse. (Marker Number 479.)

Topics and series. This historical marker is listed in this topic list: Waterways & Vessels. 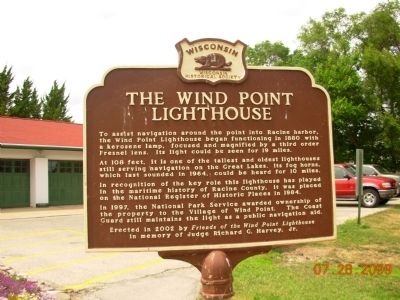 By Paul F, July 28, 2009
2. The Wind Point Lighthouse Marker
East side of two sided marker
In addition, it is included in the Wisconsin Historical Society series list.

Also see . . .  Lighthouse Friends.Com. The website of the Friends of the Lighthouse with information and photos. (Submitted on August 12, 2010.) 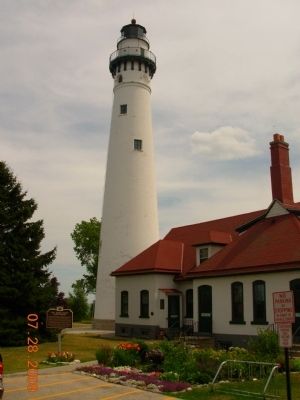 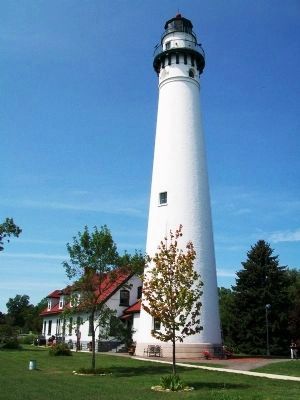