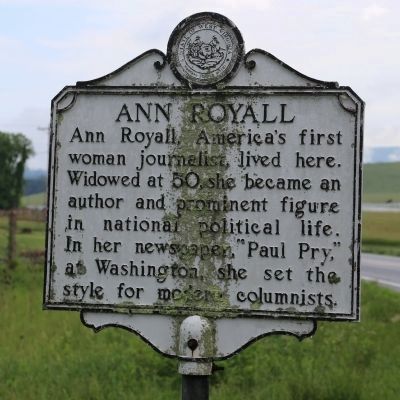 Photographed By J. J. Prats, May 30, 2015
1. South Face of the Marker
Inscription.
Ann Royall, also, Sweet Springs. . (front) , Ann Royall, Ann Royall, America's first woman journalist, lived here. Widowed at 50, she became an author and prominent figure in national political life. In her newspaper, "Paul Pry," at Washington, she set the style for modern columnists., (back) , Sweet Springs, Settled by James Moss, 1760. William Lewis bought the site and in 1792 built the inn where he entertained Van Buren, Pierce, Fillmore, and others. Thomas Jefferson designed the main building which was erected in 1833. . This historical marker was erected by State of West Virginia. It is in Sweet Springs in Monroe County West Virginia

Ann Royall, America's first woman journalist, lived here. Widowed at 50, she became an author and prominent figure in national political life. In her newspaper, "Paul Pry," at Washington, she set the style for modern columnists.

Settled by James Moss, 1760. William Lewis bought the site and in 1792 built the inn where he entertained Van Buren, Pierce, Fillmore, and others. Thomas Jefferson designed the main building which was erected in 1833.

Erected by State of West Virginia.

Topics and series. This historical marker is listed in these topic lists: Arts, Letters, Music • Communications • Settlements & Settlers • Women. In addition, it is included in the Former U.S. Presidents: #03 Thomas Jefferson, and the West Virginia Archives and History series lists. A significant historical year for this entry is 1760. 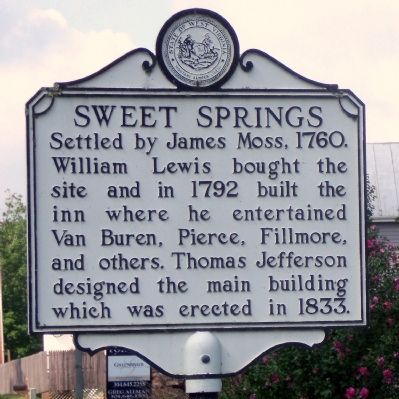 Click or scan to see
this page online
at the intersection of Kanawha Trail (West Virginia Route 311) and Jefferson Lane, on the right when traveling south on Kanawha Trail. Touch for map. Marker is in this post office area: Gap Mills WV 24941, United States of America. Touch for directions.

Regarding Ann Royall / Sweet Springs. The Nomination Form for the National Register of Historic Places (Link 2, below) refutes the claim on the marker that Thomas Jefferson designed the main building. See page 4.

Also see . . .
1. Sweet Springs Resort - Abandoned. “The popularity of the resort reflected the vacationing aspect of city-dwellers from Washington D.C. and other nearby cities, who would make the trip to the resort via train and buggy during the late 18th and 19th century. Six United States presidents, including George Washington, as well as Robert E. Lee, French General Lafayette and Queen Victoria 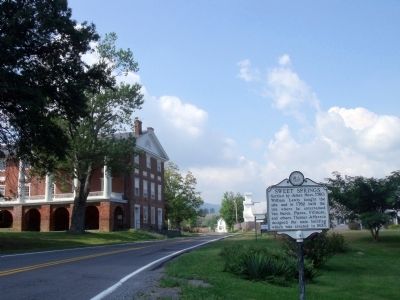 2. Wikipedia entry for Anne Royall. “She was born Anne Newport in Baltimore, Maryland. Anne grew up in the western frontier of Pennsylvania before her impoverished and fatherless family migrated south to the mountains of western Virginia. There, at age of 16, she and her widowed mother were employed as servants in the household of William Royall, a wealthy American Revolution major, freemason and deist who lived at Sweet Springs in Monroe County (now in West Virginia). Royall, a learned gentleman farmer twenty years Anne's senior, took an interest in her and arranged for her education, introducing her to the works of Shakespeare and Voltaire, and allowing her to make free use of his extensive library.

“Anne and William Royall were wed in 1797. The couple lived comfortably together for fifteen years until his death in 1812. His death touched off litigation between Anne and Royall’s relatives, who claimed that they were never legally married and that his will leaving her most of his property was a forgery. After seven years, the will was nullified and she was left virtually penniless.” ...

... “Back in Washington in 1831, she published a newspaper from her home with the help of a friend, Sally Stack. The paper, Paul Pry, exposed political corruption and fraud. 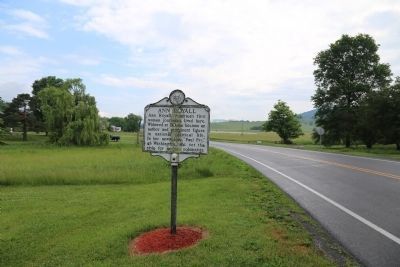 Photographed By J. J. Prats, May 30, 2015
4. Kanawha Trail WV Rt 311 (facing north)
Sold as single issues, it contained her editorials, letters to the editor and her responses, and advertisements. It was published until 1836, when it was succeeded by The Huntress. Royall hired orphans to set the type and faced constant financial woes, which were exacerbated when postmasters refused to deliver her issues to subscribers, until her death at age 85 in 1854, bringing an end to her 30-year news career.” (Submitted on May 31, 2015, by J. J. Prats of Powell, Ohio.)

Additional commentary.
1.
A railroad never served Sweet Springs, and that certainly contributed to its failure as a resort and its bankruptcy early in the 20th century. Until roads were improved in the mid 20th century, the majority of long distance travel involved trains.

The nearest railroad depot was in Alleghany, Virginia, on the Chesapeake & Ohio Railway, only 11 miles from Sweet Springs. But those 11 miles were perhaps four hours through the mountains bouncing in a horse-and-buggy on the Kanahwa Trail. When motor cars were introduced the bouncing along the ruts of the dirt road did not diminish, but perhaps the trip could be made in under two hours. Not the same as stepping off the train for a short carriage ride of a few hundred feet to The Greenbrier 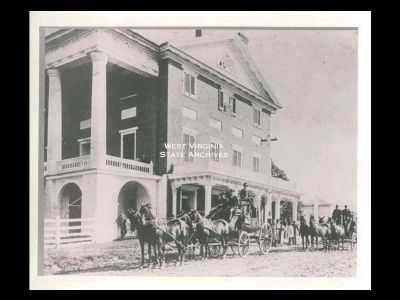