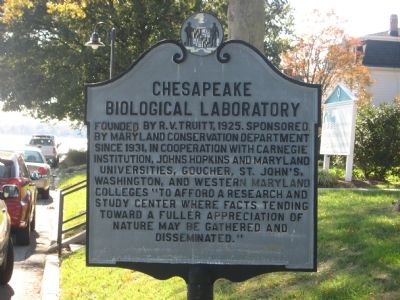 Founded by R.V. Truitt, 1925. Sponsored by Maryland Conservation Department since 1931, in cooperation with Carnegie Institution, Johns Hopkins and Maryland universities, Goucher, St. John's, Washington, and Western Maryland colleges "to afford a research study center where facts tending toward a fuller appreciation of nature may be gathered and disseminated."

Topics. This historical marker is listed in these topic lists: Education • Science & Medicine. A significant historical year for this entry is 1925.

Location. 38° 19.093′ N, 76° 27.199′ W. Marker is in Solomons, Maryland, in Calvert County. Marker is on Farren Avenue, 0.1 miles south of Charles Street (Maryland Route 2), on the right when traveling south. Marker is on the end of Solomons Island, just across the street from a long pier into the mouth of the Patuxent River. Touch for map. Marker is in this post office area: Solomons MD 20688, United States of America. Touch for directions. 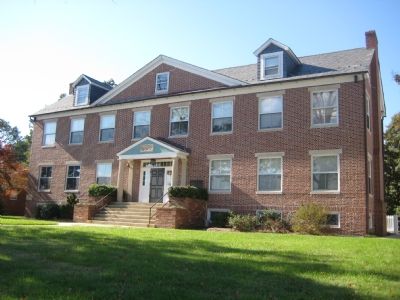 Click or scan to see
this page online
(about 500 feet away); Solomons House & Visitor Center (about 700 feet away); Enemy Blockade (about 800 feet away); M. M. Davis Shipyard (approx. half a mile away); J. C. Lore & Sons Oyster House (approx. 0.6 miles away). Touch for a list and map of all markers in Solomons. 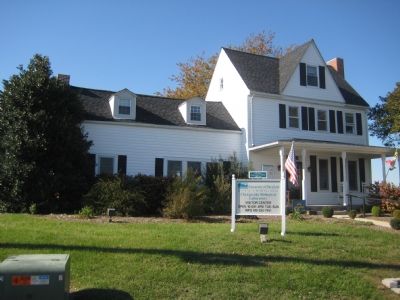 Photographed By F. Robby, November 7, 2007
3. Solomons House
This house was the home of Isaac Solomon in 1865, from whom Solomons Island got its name. Portions of the building are dated from 1780. It is now the lab's visitor center, located at Charles Street and Farren Avenue. 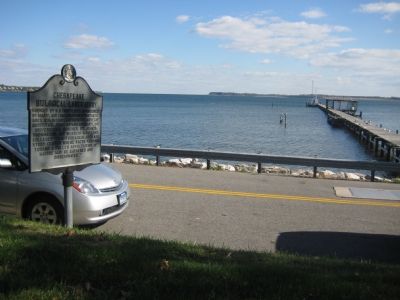