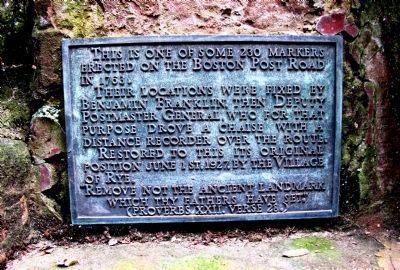 By Suzanne Clary, September 19, 2009
1. Boston Post Road Marker (Mile Marker #24)
Inscription.
Boston Post Road. . This is one of some 230 markers erected on the Boston Post Road in 1763 . . Their locations were fixed by Benjamin Franklin the Deputy Postmaster General who for that purpose drove a chaise with a distance recorder over the route. Restored to this its original position June 1st, 1927, by the Village of Rye. . . 'Remove not the ancient landmark which thy fathers have set.'(Proverbs XXII Verse 28.) . This historical marker was erected in 1927 by Village of Rye. It is in Rye in Westchester County New York

Their locations were fixed by Benjamin Franklin the Deputy Postmaster General who for that purpose drove a chaise with a distance recorder over the route. Restored to this its original position June 1st, 1927, by the Village of Rye.

'Remove not the ancient landmark which thy fathers have set.'(Proverbs XXII Verse 28.)

Other nearby markers. At least 8 other markers are within 2 miles of this marker, measured as the crow flies. Boston Post Road Historic District (about 400 feet away, measured in a direct line); Rye Meeting House (approx. 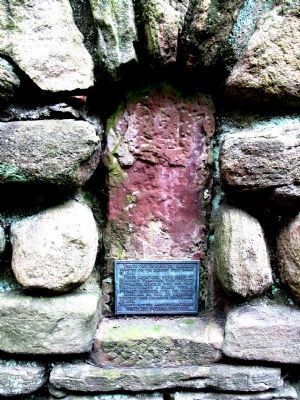 More about this marker. This rectangular metal marker was attached by the Village of Rye in 1927 to milestone or "marker" 24 of the Boston Post Road also known as the Kings Highway, one of America's oldest roads. Rye President John Morehead spearheaded the erection of these plaques as one of his "betterment" initiatives. The locations of the milestones were originally set by Benjamin Franklin (b.1706 - d.1790) in 1763 and some were replaced by the Westchester Turnpike Commission in the early 1800s. The spot Franklin marked was coincidentally located directly in front of John Jay's boyhood home in Rye, NY. Today 23 acres of Jay's 400 acre estate still lie intact behind the marker and are bounded in front by the length of a stone wall on Boston Post Road from the entrance at 210 all the way to Barlow Lane. This parcel known as the Jay Estate or Jay Property is the centerpiece of the National Historic Landmark Boston Post Road District NR82001275; it is a historic site and park with 3 owners, the Jay Heritage Center, NY State, and Westchester County; it is open to the public for historical and educational programs.

Regarding Boston Post Road. John Jay would have been about 18 years old and Franklin about 57 when Franklin placed the first milestones that this marker commemorates! The milestones were not originally set into a wall - this wall was built in the early 1900s according to archival photos.

John Jay and Benjamin Franklin of course later became colleagues and are best remembered as 2 of America's Seven Founding Fathers. They are also known as the "Peace Commissioners" and along with John Adams, they negotiated the treaty that ended the Revolutionary War with Great Britain.