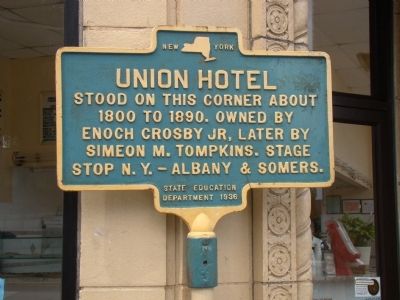 Topics. This historical marker is listed in this topic list: Roads & Vehicles. A significant historical year for this entry is 1800. 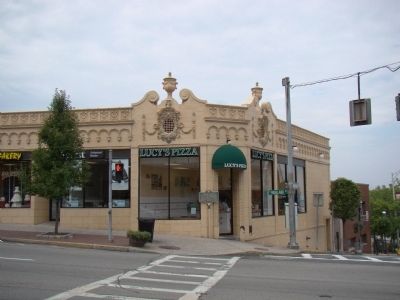 Photographed By J. J. Prats, August 10, 2010
2. Union Hotel Site and Marker
This is not the Union Hotel. It stood at this site and was torn down.

Regarding Union Hotel. A stage, or stagecoach, is a type of four-wheeled closed coach for passengers and goods, strongly sprung and drawn by four horses usually under the control of one driver. Widely used before the introduction of railway transport, it made regular trips between stages or stations, which were places of rest provided for stagecoach travelers. The business of running stagecoaches or the act of journeying in them was known as staging. —Wikipedia

The stagecoaches once ran between New York City and Albany and between New York City and Somers. Somerstown Turnpike—the current Croton Avenue then Somerstown Road (Routes 133 and 100)—begins one block north, on the right. From here it is 35 miles to downtown Manhattan, 16 miles to Somers, and 120 miles to Albany. Passengers stopped for meals, waited for the next stagecoach, or spent the night at the hotel.

In 1851 the Hudson River Railroad was completed from Albany to New York City, and the stagecoach era on this route quickly came to an end.

Editor’s want-list for this marker. Photo of the red milestone (close up and in the distance) • Can you help?
Share this page.