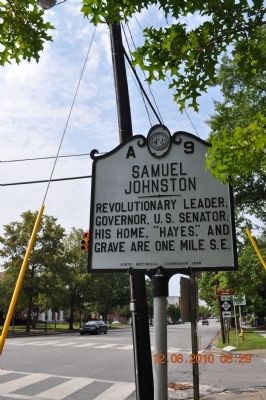 Topics and series. This historical marker is listed in these topic lists: Cemeteries & Burial Sites • Government & Politics • War, US Revolutionary. In addition, it is included in the North Carolina Division of Archives and History series list.

2. Wikipedia Samuel Johnston. Hayes Plantation Hayes Plantation is a site near Edenton, North Carolina that was the plantation of Samuel Johnston (1733-1816), who served as Governor of North Carolina from 1787 to 1789. Johnston become one of the state's first two United States Senators, serving from 1789 until 1793, and served later as a judge until retiring in 1803. (Submitted on August 24, 2010, by Sandra Hughes Tidwell of Killen, Alabama, USA.)