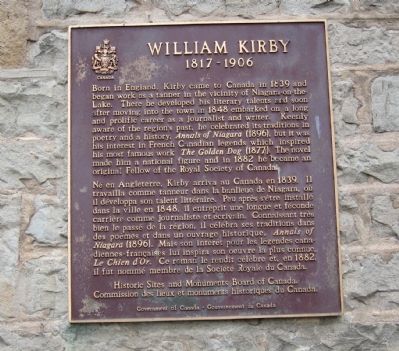 In English:
Born in England, Kirby came to Canada in 1839 and began work as a tanner in the vicinity of Niagara-on-the-Lake. There he developed his literary talents and soon after moving into the town in 1848 embarked on a long and prolific career as a journalist and writer. Keenly aware of the region's past, he celebrated its traditions in poetry and a history, Annals of Niagara (1896), but it was his interest in French Canadian legends which inspired his most famous work The Golden Dog (1877). The novel made him a national figure and in 1882 he became an original Fellow of the Royal Society of Canada. 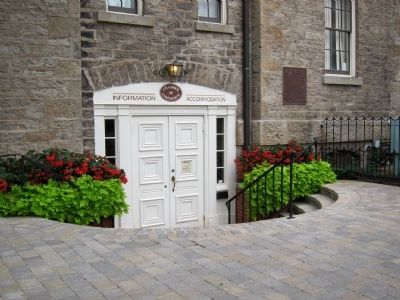 Topics. This historical marker is listed in this topic list: Arts, Letters, Music. A significant historical year for this entry is 1839.

More about this marker. The marker is located to the right of the entrance to the Niagara-on-the-Lake Chamber of Commerce, which is located on the south (i.e. left) side of the former Niagara District Courthouse.