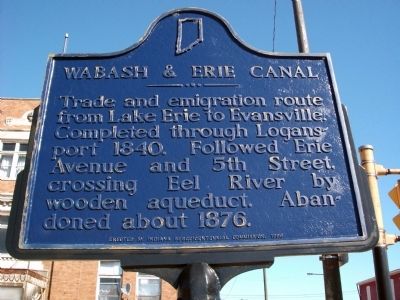 Topics and series. This historical marker is listed in these topic lists: Industry & Commerce • Waterways & Vessels. In addition, it is included in the Indiana Historical Bureau Markers, and the Wabash & Erie Canal series lists. A significant historical year for this entry is 1840.

Other nearby markers. At least 6 other markers are within 14 miles of this location, measured as the crow flies. Early Masonic Temple (about 300 feet away, measured in a direct 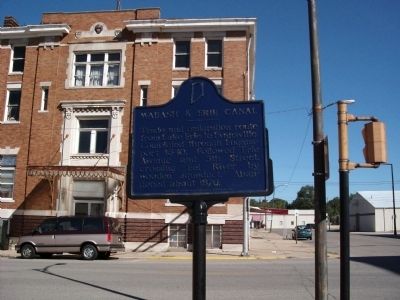 Regarding Wabash & Erie Canal. Courtesy of the Indiana Historical Bureau::

The first sentence of the marker is correct. The Wabash and Erie Canal was a trade route that linked Lake Erie to Evansville. According to Ralph D. Gray’s essay “The Canal Era in Indiana” from Transportation and the Early Nation, county populations bordering the canal grew from 12,000 before the canal in 1835, to 60,000 in 1845, to 150,000 in 1855. However, the marker’s second sentence is slightly incorrect. A search of the Logansport newspapers revealed that the canal was opened to that city’s traffic in 1839, not 1840.

An exact date for the canal’s completion through Logansport could not be determined because IHB staff was not able to locate several issues of the Logansport Herald or the Logansport Telegraph for April and most of May, 1839. However, the Telegraph of March 23, 1839 reported, “The 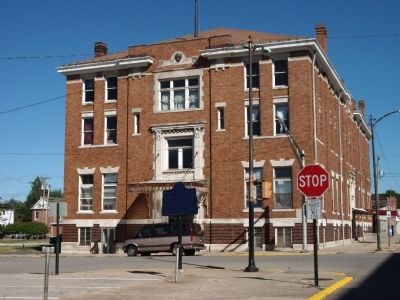 Photographed By Courtesy:: Carly C. Kindig, September 5, 2010
3. Long North View - - Wabash & Erie Canal Marker
Wabash and Erie Canal will be opened for navigation between Logansport and Fort Wayne, about the first of April.” Then on May 28, 1839, the Herald reported, “The Canal. - Boats are arriving almost daily. Business is becoming better every day. In a few days the water will, we understand, be let in to Gorgetown [sic] six or eight miles below.” There were also advertisements running for two canal cargo companies (the Wabash and Erie Packet Boat Company and Spencer, Rice, & Hopkins Storage, Forwarding, and Commission) in the 1839 Herald and Telegraph.

Logansport Weekly Journal on May 3, 1873 there was a wooden aqueduct. The marker states that the canal was abandoned “about 1876,” and while this statement is acceptable because of the qualifying “about,” the correct date is probably 1875. Several county histories as well as the 1878 Combination Atlas Map of Cass County disagree, and give 1875 as the abandonment date. Newspaper accounts reveal that in 1873 the Cass County Commissioners, under public pressure, appropriated $5,000 to provide for repair of the canal. It is evident from these articles that the canal was not in good shape. In May, 1875, the Logansport Weekly Journal reported that “The ‘Iceberg’…arrived last Monday, being the first canal boat of the season.” In the Weekly Journal’s year-end recap of local happenings for 1875 it noted, “May 3. The canal boat Iceberg…was 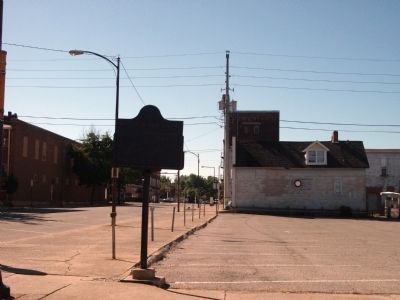 Photographed By Courtesy:: Carly C. Kindig, September 5, 2010
4. Looking South - - Wabash & Erie Canal Marker
the first and last arrival of the season.” There was no recollection whatsoever of canal activity in the Weekly Journal’s year-end review for 1876. ""

Also see . . .
1. "Wabash & Erie Canal Park" - Delphi, Indiana::. This organization has the greatest concentration and most of the known remains of the Wabash & Erie Canal in Indiana. The many links on this web site are very interesting and fun to work with. (Submitted on September 7, 2010, by Al Wolf of Veedersburg, Indiana.)

2. "The men who dug the Canal" ::. A light and lively song with many old photos of canal builders in the process of digging a canal. (Submitted on September 7, 2010, by Al Wolf of Veedersburg, Indiana.)

3. "Angel of the Canal" ::. Many fell ill digging canals. In frontier days there were few doctors and medicine was scarce. In the Brecksville, Ohio area Mrs. Johnson became known as the "Angel of the Canal" for her care of the ill. (Submitted on September 7, 2010, by Al Wolf of Veedersburg, Indiana.) 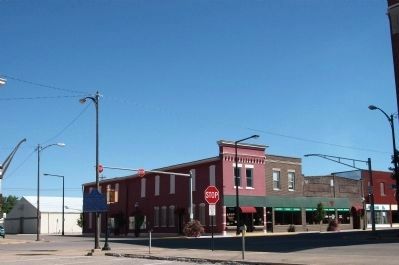