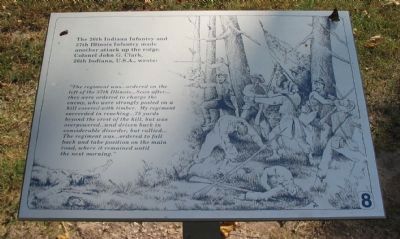 The 26th Indiana Infantry and the 37th Illinois Infantry made another attack up the ridge. Colonel John G. Clark, 26th Indiana, U.S.A., wrote:
"The regiment was ... ordered on the left of the 37th Illinois...Soon after...they were ordered to charge the enemy, who were strongly posted on a hill covered with timber. My regiment succeeded in reaching...75 yards beyond the crest of the hill, but was overpowered... and driven back in considerable disorder, but rallied...The regiment was...ordered to fall back and take position on the main road, where it remained until the next morning." (Marker Number 8.)

Location. 35° 59.164′ N, 94° 18.273′ W. Marker is in Prairie Grove, Arkansas, in Washington County. Marker can be reached from Park Tour Road, on the right when traveling east. Located on the walking trail at stop four, the Borden House, of Prairie Grove Battlefield State Park. Touch for map. Marker is in this post office area: Prairie Grove AR 72753, United States of America. Touch for directions. 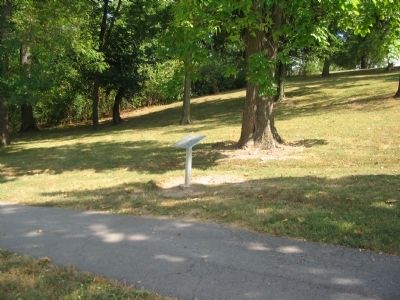 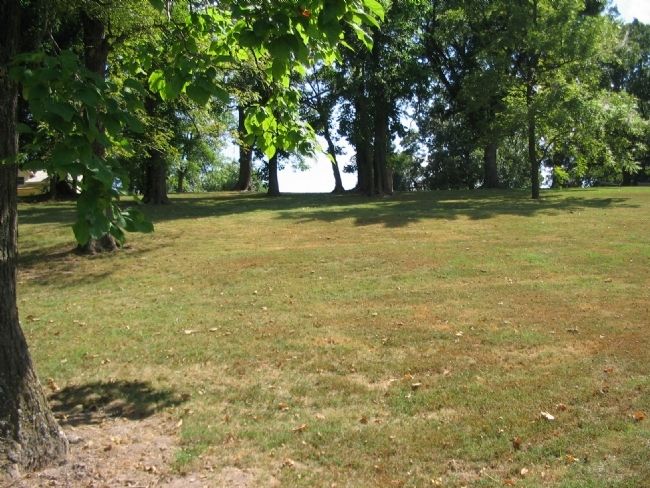 Photographed By Craig Swain, August 30, 2010
3. Retreat of the 37th Illinois
Looking up the ridge toward the Borden House (seen through the trees to the left). The 37th Illinois fell back from their advance position in the field behind the Borden House to a second position just in front of the house (in the trees here on the slope). Under pressure the regiment fell back further to the protection of artillery.
Credits. This page was last revised on September 9, 2020. It was originally submitted on September 7, 2010, by Craig Swain of Leesburg, Virginia. This page has been viewed 1,179 times since then and 25 times this year. Photos:   1, 2, 3. submitted on September 7, 2010, by Craig Swain of Leesburg, Virginia.
Share this page.