In Memory of Julia C. Bulette 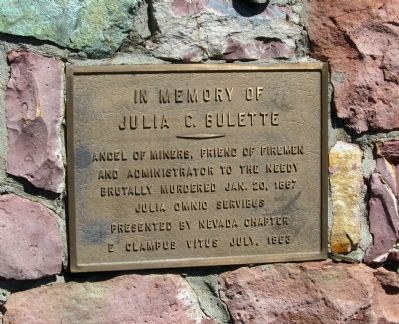 Topics and series. This historical marker is listed in these topic lists: Charity & Public Work • Women. In addition, it is included in the E Clampus Vitus series list.

Location. 39° 18.521′ N, 119° 38.984′ W. Marker is in Virginia City, Nevada, in Storey County. Marker is at the intersection of D Street and Washington Street, on the left when traveling north on D Street. Touch for map. Marker is in this post office area: Virginia City NV 89440, United States of America. Touch for directions. 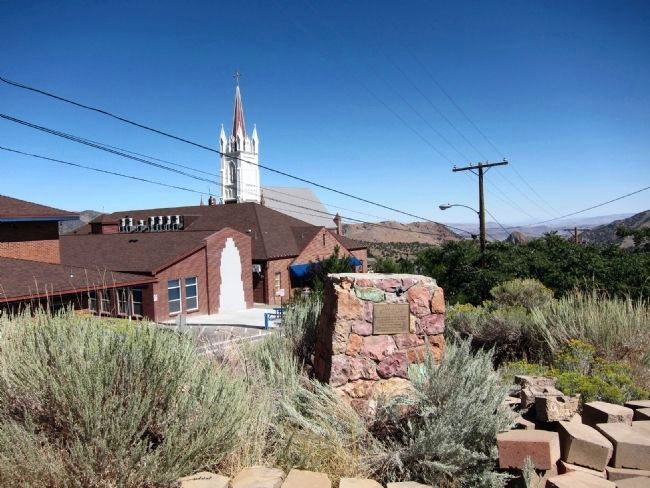 More about this marker. The marker is mounted on a stone monument near the corner of an empty lot on the uphill side of D Street, just to the south of the steps that lead up to C Street.

Regarding In Memory of Julia C. Bulette. Julia Bulette (1832- January 19/20, 1867), was an English-born American prostitute, and purported madam in Virginia City, Nevada. After her violent death, she has been falsely described as proprietor of the most elegant and prosperous brothel in the City and various films and books took inspiration of her real or purported biography. She was said to be the first non married white woman to arrive in the mining boomtown following the Comstock Lode silver strike in 1859. Bulette was a popular figure with the miners, and the local firefighters made her an honorary member of Virginia Engine Company Number 1. She was murdered by John Millain, a French drifter and jewel thief in 1867. - Wikipedia entry for Julia Bulette (retrieved 9/14/10)

Also see . . .  Myth #20 - Red Light Legend and lore: Julia Bulette. Former Nevada State Archivist Guy Rocha takes on the "fakelore" that surrounds the life and doings of one of Virginia City's most (in)famous residents. On the execution of Bulette's murderer: ...Law enforcement officials diligently pursued the person who had robbed and killed her, ultimately hanging one John Millian after the convicted murderer had exhausted all his appeals. On April 24, 1868, more than 4,000 spectators, including Mark Twain who was touring the country following a trip to Europe and the Middle East, witnessed the execution. (Submitted on September 15, 2010.)