In Memory of Hualapai Ancestors August 28, 2010
1. In Memory of Hualapai Ancestors Marker
Inscription.
In Memory of Hualapai Ancestors. Yu’ Nyihay Jamj Vo:jo. We honor our ancestors who died violent deaths at the hands of their captors and at this concentration camp. We greet the spirits of our ancestors and embrace their strength and above all else, their will to survive this holocaust: the Hualapai People’s strength and cultural survival endures to all future generations to come. . This historical marker was erected by Hualapai Indian Tribe. It is in Ehrenberg in La Paz County Arizona

We honor our ancestors who died violent deaths at the hands of their captors and at this concentration camp. We greet the spirits of our ancestors and embrace their strength and above all else, their will to survive this holocaust: the Hualapai People’s strength and cultural survival endures to all future generations to come.

Topics. This historical marker is listed in these topic lists: Native Americans • Wars, US Indian. 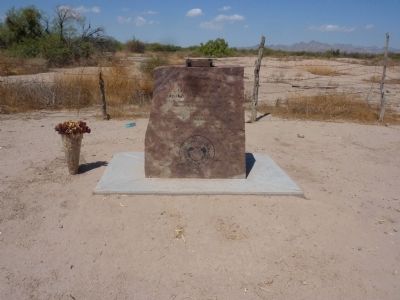 More about this marker. The marker is a sandstone block with the memorial words sand blasted into it. There are some innocuous containers around for flowers and other memory items.

Regarding In Memory of Hualapai Ancestors. Formerly known as Pot Holes, the town of La Paz grew up in 1862 to serve gold miners in the vicinity. La Paz was a stage stop between Fort Whipple, Arizona and San Bernardino, California. It was the county seat of Yuma County from 1862 to 1870. The gold was gone by 1863, but La Paz stayed as a shipping port and supply base until the Colorado River shifted its course westward in 1866, leaving La Paz landlocked.

In 1874, after nine years of running battle with the Hualapai Indians, the U.S. Army decided to make use of deserted La Paz, now on the Colorado River Indian Reservation, inhabited, in part by Hualapai traditional enemies, the Mohave. The Hualapai were rounded up and marched from Fort Beale in Kingman to La Paz, approximately 160 miles. General George Crook noted the Hualapai, mountain Indians, suffered terribly in the heat and desert conditions of the Lower Colorado River. After a year, the Hualapai returned to their homeland between the Bill Williams River and Grand Canyon and were spared further military action. 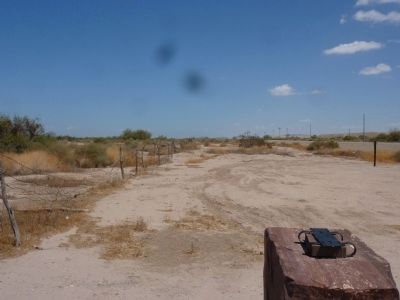 August 28, 2010
3. Looking North from the Hualapai Ancestors Marker
Townsite of La Paz is on either side of the Poston/Parker Road/ AZ 1.
excellent general account of historical events of the Hualapai and their reservation is found in the 1975 U.S. Bicentennial publication, "Peach Springs in Mohave County" by Roman Malach, former Mohave County Historian.

Our thanks to Richard Powskey, former Hualapai Tribal Council member and one of today's Hualapais making the annual memorial run from the Hualapai homeland to La Paz.

4. We Are an Indian Nation - A History of the Hualapai People. The most recently published book documenting the 13 Bands of Pai people's adaptation to life in the United States of America as a quasi-sovereign nation.
Some of the author's comments on his efforts to document and publish this book:
When the Hualapai Tribal Council heard the proposal for this project in 1999, they wanted to discuss Hualapai history. They knew their own past, but they wanted to know what I had read in books 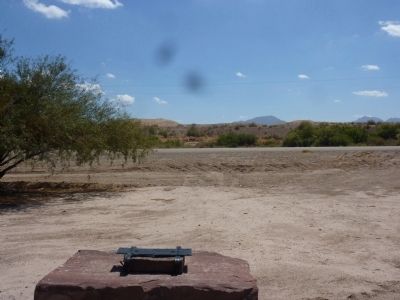 August 28, 2010
4. Looking east to La Paz Mountain from the Hualapai Memorial Marker
or learned on the reservation. This past, we all agreed, formed an important story that Natives and non-Natives could learn from. Hualapai struggles for the land were powerful examples of cultural persistence that could motivate other oppressed peoples to fight for justice.
In particular, their legal battle against the Santa Fe Railway (they won a precedent-setting land claims case in the US Supreme Court in 1941) illustrated how a small nation could be victorious against one of the then wealthiest corporations in America. Their history of wage labor, respecting female leaders, and struggling for water rights stood as powerful examples of resilience. After discussing these and other issues for two hours, they supported my proposal to write about their history.
I mention this moment in the research and writing process to highlight how this book has never been a solitary or dispassionate exercise. The proposal to the council and more than a decade visiting the reservation are crucial to balancing power relationships at the root of scholarly inquiry into Indigenous pasts. Presenting the proposal to the council acknowledged that the Hualapais have a right to comment on what outsiders write about them, especially when many of the primary sources in this book were produced within a colonial context and placed in the National Archives and made available to the public 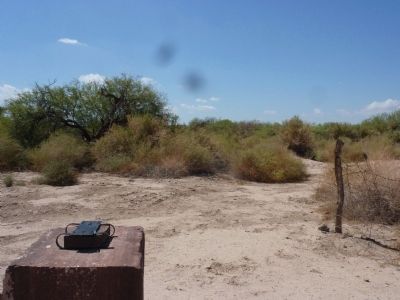 August 28, 2010
5. Looking South from the Hualapai Ancestors Marker
The swales in the immediate landscape are where the adobe walls of La Paz have melted back into the earth.
without their permission. It also was necessary to talk with them to avoid revealing sacred sites, sensitive religious practices, and valuable cultural properties. Finally, the meeting with the council, like conversations with community members, demonstrated my respect for a people who have endured a century of colonial research into their history and culture.
Reciprocity and cooperation are part of an important shift in research methodologies and the relationships between Indigenous peoples and academics. As argued by Linda Tuhiwai Smith in Decolonizing Methodologies: Research and Indigenous Peoples, scholars can no longer ignore the people whose cultures they have mined for profit. Something of a conspiracy has been perpetuated by those who claim that research can be conducted into the pasts of Indigenous peoples without recognizing the ways that the academy has facilitated the colonization of Indigenous peoples.
Beginning in the nineteenth century, through the mid-twentieth century in contexts such as the Indian Claims Commission, and running through the present, many scholars have supplied the intellectual support for congressional legislation and popular stereotypes held by non-Indigenous Americans that have resulted in catastrophic losses for Native peoples. In even more instances, scholars have hid behind the veils of objectivity and academic freedom 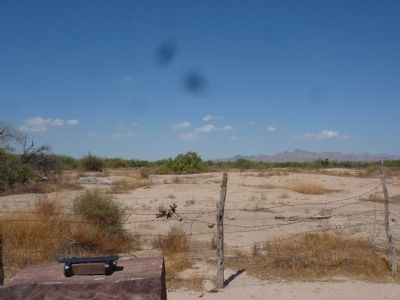 August 28, 2010
6. Remnants of La Paz from Hualapai Ancestors Marker
to avoid responsibility for the implications of work that has, at worst, portrayed Native people as savage, anti-modern relics of the past, and at best, failed to consider their views on that history.
Writing a history of a people who have survived ethnic cleansing, racism, and oppression has been emotionally charged and professionally rewarding. No amount of reading or archival research fully drives home the reality of standing in the middle of a one-room house inhabited by ten family members. Listening to elders talk about stories handed down from their great-grandparents brought me into conversation with people born in the mid-1800s. Their views and the views of many other Hualapais reshaped the interpretations and premises of this book.
Innumerable conversations revealed how community members live in a social space populated by the ghosts of history and the ruins of the past. Just as the stories about the escape from La Paz (where they were relocated to and interned in between 1874 and 1875), their victory against the Santa Fe Railway, or the achievements of World War II veterans structure Hualapai nationalism, their inability to use water from the Colorado River, high unemployment rates, and the ubiquity of alcoholism and diabetes are direct functions of historical processes that have alienated them from their land and resources. In ways that are good and bad, the inseparability of the Hualapais’ past from their present casts a long shadow over the reservation.
The participant-observation methodology that I have tried to follow has its flaws, but it has improved the book. It has also raised important questions about authorship. Talking with people about their family history, participating in local activities, and simply sitting in the living room of a tribal member, for instance, are a few of the most memorable experiences of this project. I had the honor to meet with the Tribal Council dozens of times. We talked about the tribal constitution and what it means for the nation, debated blood quantum as a basis for tribal membership, and discussed the deep-rooted problems plaguing their economy. I worked for their Department of Cultural Resources and their Tribal Court, wrote grants, taught research methods to teenagers, discussed the book with the Hualapai History Review Board, ate lunch with elders, and took tribal members to the National Archives to find information on tribal institutions.
These experiences yielded important yet difficult questions. There were times when family and personal differences pulled the project in competing directions. Several individuals noted mistakes about historical events, perceived imbalances and biases, and raised concerns about how outsiders would view their community. They offered hard and important suggestions that improved the book. Somewhere between my own archival research, interviews with and input from Hualapais, and numerous outside reviewers, the narrative that has emerged is both mine and theirs.
Although no single book could come close to representing the full history and the achievements of this community, I hope that We Are an Indian Nation provides at least a glimpse into the voices and agency of the Hualapai people. It has been an honor to work with the tribe, and I look forward to many years of collaboration and cooperation. (Submitted on September 20, 2010.)
Credits. This page was last revised on June 16, 2016. It was originally submitted on September 15, 2010. This page has been viewed 2,275 times since then and 41 times this year. Last updated on September 21, 2010. Photos:   1, 2, 3, 4, 5, 6. submitted on September 15, 2010. • Syd Whittle was the editor who published this page.
Share This Page.