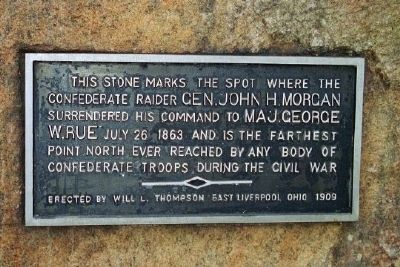 By Jamie Abel, circa 1994
1. Morgan's Surrender Marker
Inscription.
Morgan's Surrender. . This stone marks the spot where the Confederate raider Gen. John H. Morgan surrendered his command to Maj. George W. Rue July 26, 1863 and is the farthest point north ever reached by any body of Confederate troops during the Civil War. . This historical marker was erected in 1909 by Will L. Thompson, East Liverpool, Ohio. It is in West Point in Columbiana County Ohio

This stone marks the spot where the Confederate raider Gen. John H. Morgan surrendered his command to Maj. George W. Rue July 26, 1863 and is the farthest point north ever reached by any body of Confederate troops during the Civil War.

Topics. This historical marker is listed in this topic list: War, US Civil. A significant historical month for this entry is July 1864.

Other nearby markers. At least 8 other markers are within 7 miles of this marker, measured as the crow flies. West Point Vicinity (here, next to this marker); 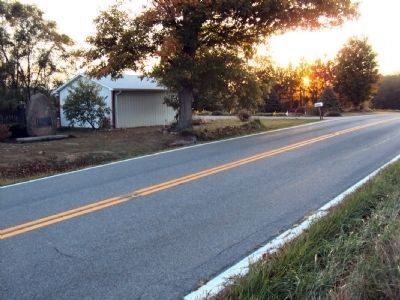 More about this marker. The marker has been moved to this location since the date the photograph was taken. It is now situated just off the side of the road, where, in the photo taken in the early 1990s, it can be seen next to a sidewalk off the road in a state-maintained roadside rest.

"So in the rolling hills of rural Columbiana County, the monument to Morgan's surrender remains almost hidden from view to drivers along State Road 518. Erected in 1909 and dedicated a year later, it was moved 45 years ago to the rest area from its original location about 200 yards east when the state failed to secure rights to the property where the surrender occurred.

Just over four years ago, the Ohio Department of Transportation closed the rest stop as part of a statewide program to abandon rest areas without septic systems, said Joel Hunt, an ODOT spokesman in Columbus."

Related marker. Click here for another marker that is related to this marker. An Iowa monument for Jackson's Missouri guerrillas marks the farthest north that any Confederate soldiers reached during the war, about five miles farther than Morgan's cavalry reached in Ohio. 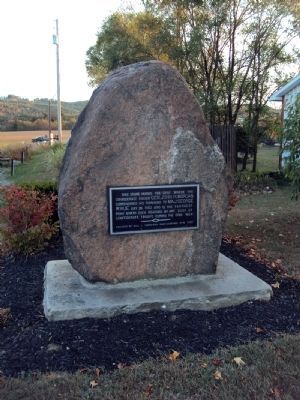 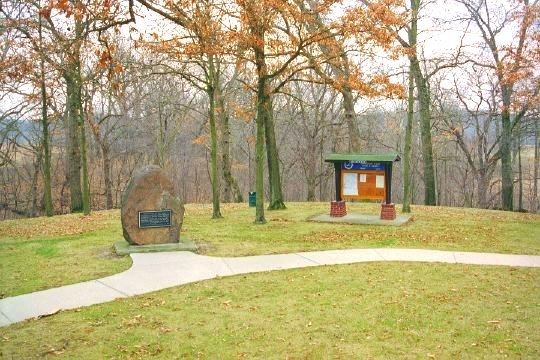