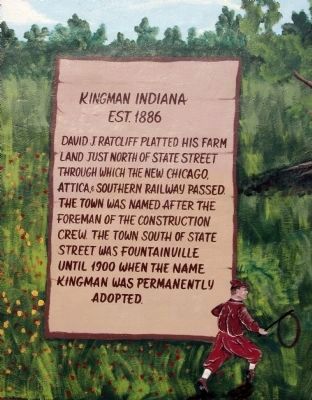 Photographed By Courtesy:: Marilyn Wolf, August 29, 2010
1. Kingman Indiana Marker
(Click on any of these photos to see the details.)
Inscription.
Kingman Indiana. Est. 1886. David J. Ratliff platted his farm land just North of State Street through which the new Chicago, Attica, and Southern railway passed. The town was named after the foreman of the construction crew. The town South of State Street was Fountainville until 1900 when the name Kingman was permanently adopted. . This historical marker was erected in 1995 by Nathan Hodge (Eagle Scout Project), Kingman Town Board and the Town People. It is in Kingman in Fountain County Indiana

David J. Ratliff platted his farm land just North of State Street through which the new Chicago, Attica, & Southern railway passed. The town was named after the foreman of the construction crew. The town South of State Street was Fountainville until 1900 when the name Kingman was permanently adopted.

Topics. This historical marker is listed in these topic lists: Industry & Commerce • Railroads & Streetcars • Settlements & Settlers. A significant historical year for this entry is 1900.

Other nearby markers. At least 8 other markers are within 7 miles of this marker, measured as the crow flies. Tangier High School Bell (approx. 4 miles away); Wilkins Mill Covered Bridge (approx. 5.3 miles away); Millcreek Township 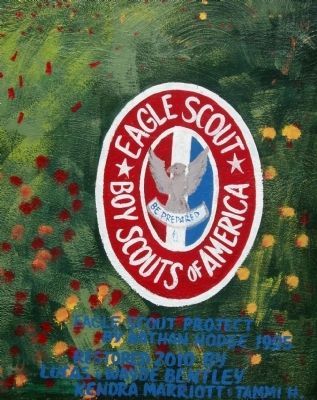 “”Nathan Hodge painted the mural on the Kingman Town Hall building about 15 years ago. Hodge, a young man, only lived two more years after completing the mural. Now (2010), more than a decade later, his mother, Beth Hodge, and her grandchildren have worked to restore the painting, which had become time and weather-worn.

Though it would have been easier to paint over the mural, when the Town of Kingman made some improvements to the Town Hall, recently; it was important, not only to Hodge’s family, but to others in the community that the mural remain.

“The town wanted it kept on there,’ said Beth Hodge. “It’s a landmark.”

The mural depicts the Chicago Attica Southern Railway passing through 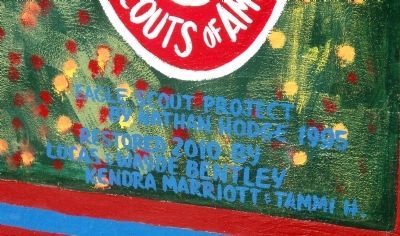 Beth and her grandchildren, Lucas Bentley (18), Kendra Marriott (13), and Wayde Bentley (11), worked on the mural over the past few weeks. They spent up to about three hours each day, touching up the original brushstrokes, created by Nathan in the mid 90's.

Lucas is an accomplished young artist, and a graduate of Fountain Central. His work has done well in the annual d’Arlier Cultural Center art contest. Headed for college, this week, it was important to Lucas to see the project completed before he left. He said he had worked on a couple of murals prior to restoring this one. When asked if he would ever design a mural of his own, he said he might, someday.

As they did of the original mural, Kingman Hardware donated the paints for the project. “” 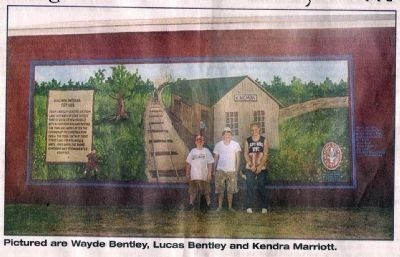 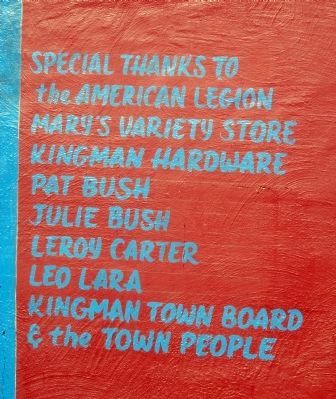 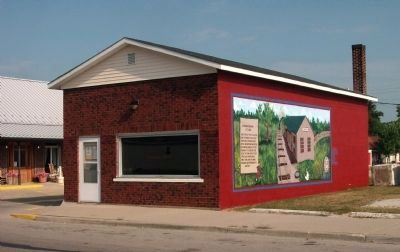 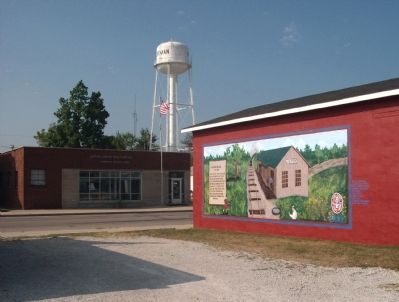 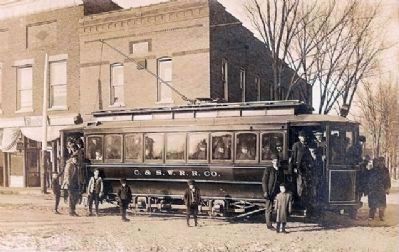 Photographed By Courtesy:: ingenweb.org (Fountain County)
8. Kingman Interurban - C. & S. W. R. R. Co.
(Courtesy: History of Fountain County, 1983 Ed.) The photo is of the Interurban's "First" run in 1909. Nearly all of Kingman truned out for the Inaugural run. The interurban was only four miles long and cost five cents for a ride. Beginning service in 1909 the Kingaman Interurban only lasted until 1911 due to economics. 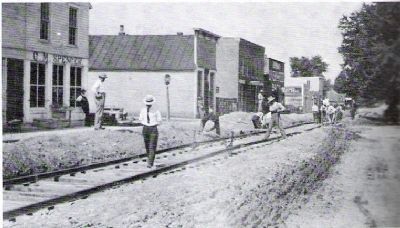 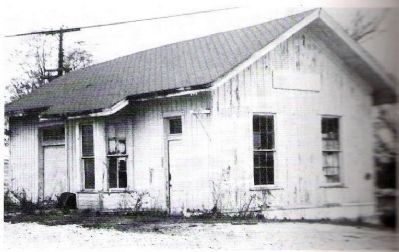